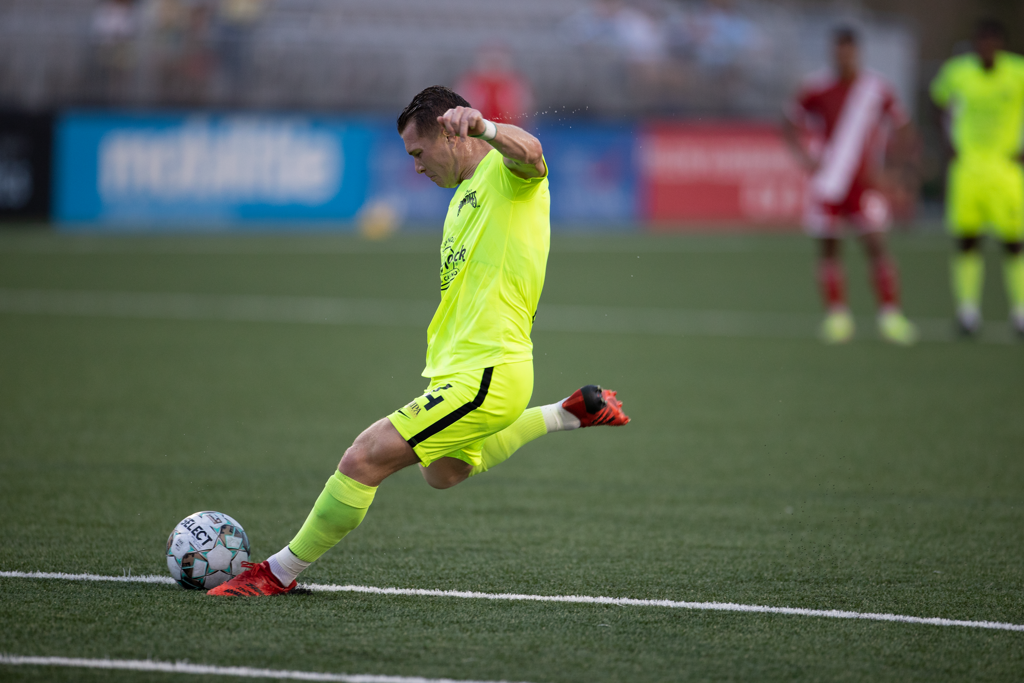 After spending a day out of first place, the Tampa Bay Rowdies retook the top spot in the USL Championship’s Atlantic Division by knocking off Loudoun United FC 2-0 at Segra Field on Monday night.

Lewis Hilton tallied the opening strike for his first goal ever for the Green and Gold and he also added the assist on Forrest Lasso’s headed goal just before halftime.

The all-around team performance to see out a win and clean sheet was a nice gift for Rowdies Head Coach Neill Collins on the night of his 100th match with the Rowdies.

“Lewis has just been fantastic this season up to this point.," said Collins. “He’s been unfortunate not to score on a couple of occasions… I think the thing about Lewis is his performances have been all around consistent. It’s good he gets on the scoresheet tonight to back up what he’s been doing week in and week out."

The night started off on a promising note in the 2nd minute when Conner Antley received a pass in the center of the box with acres of space. He got his fit behind it with his first touch and send the effort wide left, though.

Loudoun wound up finding the first shot on target of the night in the 18th minute. Jacob Greene put some power into a shot toward the near post, but keeper Evan Louro was able to stymie him and send the ball out danger.

Five minutes later, Rowdies captain Sebastian Guenzatti drove all the way to the top of Loudoun’s box with a few defenders attempting to impede him. Finally, Guenzatti was tripped up in the center of the field and 20 yards out from goal, paving the way for Tampa Bay’s first goal. Guenzatti dummy-stepped over the ball, leaving Lewis Hilton to crack a shot past the wall and into the bottom left corner.

Wingback Sebastian Dalgaard threatened to add a second not long after Hilton’s tally. Dalgaard penetrated the box and slipped through a few defenders before ripping a low shot that forced Jermaine Fordah into a save.

Loudoun managed to gain hold of possession for a stretch again after weathering the pressure from the Rowdies. However, Hilton drove the dagger in on the last play of the half. After drawing a foul 40 yards from Loudoun’s goal, Hilton delivered a pinpoint free kick into the box for Forrest Lasso to leap up and power a header across goal. Lasso’s effort was perfectly weighted and sank down under frame and into the back of the net.

The hosts were not deterred by the hole they found themselves in at halftime. Loudoun came with energy and purpose after the break and eventually earned a penalty after Louro was judged to have clipped Houssou Landry down in the box. Louro, though, rose to the moment and denied the ensuing penalty from Timmy Mehl with an outstanding diving effort to his right.

Louro had another phenomenal stop in stoppage time as well. With time running out, substitute Tyler Gabarra aimed for the top left corner from the edge of the 6 yard box only for Louro to swipe the strike over the goal. Louro’s heroics not only kept the result intact, they also closed out Tampa Bay’s 8th clean sheet of the season.

“I thought we did fantastically well because Loudoun played really free, really adventurous once they went 2-nil down," said Collins. "Despite the penalty, I thought we limited them to very few clear cut chances. I still feel we had the best chances of the game and could have come out 3 or 4-nil winners if we’d taken more clear cut chances. They certainly made us work for it and no surprises here how difficult that result was to come by.”

The victory places the Rowides on top again in the division, though still only by the goal differential tiebreaker. Pittsburgh Riverhounds SC remains even with the Rowdies at 37 points, while Miami FC sits only 3 points back after going unbeaten in their last 5 outings.

Tampa Bay returns to Al Lang Stadium this Saturday to face the Charlotte Independence. After dispatching Charlotte in the first match of the season, the Rowdies have dropped two straight road contests in Charlotte. They will look to even the season this weekend now that they are back at home.  Tickets for the match can be purchased here.