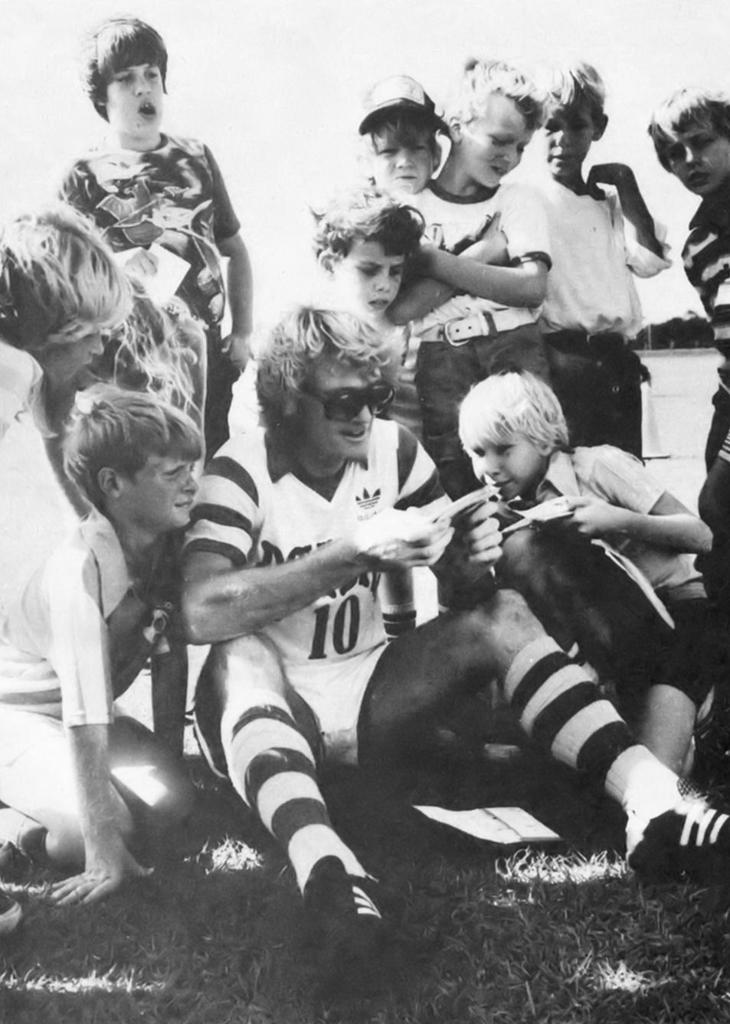 The Tampa Bay Rowdies and Rodney Marsh are linked together forever. Any story looking back at the Rowdies of the 70s and 80s must include Marsh. Likewise, any overview of Marsh’s long and memorable career would be incomplete without mentioning his indelible spell with the Rowdies.

Tampa Bay was not Marsh’s first stop in North America when he was exploring his options outside of England in 1976, though. At the time, Marsh was one of the biggest stars in English football, but after a falling out with management at Manchester City it was time to move on and he was ready to be wooed by the right opportunity. Right around the same time, music legend Elton John was coming on board as an investor in the Los Angeles Aztecs in the North American Soccer League. John wanted to bring Marsh and legendary striker George Best onto the same squad.

So, Marsh suddenly found himself on a private plane to sunny California.

“I got flown for the full VIP treatment for a few days,” said Marsh. “We went to see Elton John’s show at Dodgers Stadium. He’d just come on as an owner and was really interested in having me in LA. It all seemed well and good, but then I got this call from a guy named Beau Rogers, who worked for the Rowdies owner George Strawbridge. He said, listen, ‘I don’t know what’s been said but just don’t sign with anyone yet. We want you in Tampa.’ That’s where it all started with the Rowdies.”

When Marsh got that call, the Rowdies were fresh off a championship season in their inaugural campaign in 1975. They had made a huge splash in the market as the first and only major sports team in the region. The Tampa Bay Buccaneers would not join the local sports scene until the fall of 1976. The Rowdies were the only game in town, but they had yet to make many waves internationally, or even nationally.

Once Marsh touched down in Tampa Bay, though, he knew this was the place he was meant to be.

“They rolled out a whole welcome party for me at the airport when I landed,” he recalled. “The Wowdies were there, they had the fans there. It was quite something. I can’t quite explain the feeling. I just knew. The whole experience just felt right immediately. I loved it from the start.”

The excitement and energy from the fans was there from the start of Marsh’s first season in Tampa Bay. A crowd of 32,000 showed up for his first match when the Rowdies beat the Chicago Sting 2-1 to kick off the season. Marsh and Derek Smethurst scored the goals that day to get Tampa Stadium buzzing, although Marsh was a bit surprised by some of the reactions from the crowd.

“I hit the crossbar from far out and you could hear a pin drop in that stadium,” he said. “I thought, in England this would’ve got everyone in the crowd up and roaring. Then later in the game, our goalkeeper boots the ball all the way down the field and the crowd goes wild. So that was a bit of an adjustment.”

Marsh’s personality and style of play fit with what the Rowdies had already built on the field and through clever marketing. The Rowdies were interested in putting on a show and giving the fans some thrills to remember every time they took the field. Meanwhile, Marsh was a born showman on and off the field. As a brash and bold attacker who loved to drive toward goal at every opportunity and one who never shied away from letting his opinion be known with colorful quotes, Marsh felt right at home with the Rowdies.

“I’d always identified with the American spirit, I suppose,” said Marsh. “With the Rowdies, the relationship with the fans was one where we fed off each other. I would do something and then they would respond, or it would be the other way around. It was very unique and special thing. One time I leaned over and mooned the crowd during a game and then the next thing you know there’s a group called The Mooners at the games with t-shirts and everything. Are The Mooners still around? I don’t know if they are.”

The Rowdies continued to excel on the field during Marsh’s four seasons with the club, claiming the best record in the league in 1976 and reaching the championship final in 1978 and 1979. In his time playing for the Green and Gold, Marsh tallied 48 goals and was selected as an NASL All-Star every year.

“The team really came around to adjusting to the way I played,” he said. “I liked having all the open space to run and dribble. I was a technical player that loved to attack and score. It didn’t take long for us to develop into a great team. Being a part of something unique like that is something that stays with you. You don't get it everywhere. We really tried to entertain and give the fans some thrills, and I think we were successful in that way at least.”

Those NASL heydays eventually came to an end as the league faltered in the early 80s, but the memories and impact of Marsh and his Rowdies teammates is still felt today. When he and former Rowdies forward Steve Wegerle went to Rowdies game a few years ago, the two were recognized and swarmed by fans with a connection to the old days or some newer fans who just wanted to pay their respects.

“I remember doing a radio interview one day,” recalled Marsh. “We have a nice, short conversation and then the host opens it up to callers and all these lights just start going crazy and lighting up. It was really incredible. This woman comes on and she does the whole bit. ‘The Rowdies run here, the Rowdies run there… the Rowdies are… a kick in the grass! She sang the whole thing. Another guys said the song was driving him mad! That's when I though we had something.

“You have to hand it to ownership and the front office. It was brilliant marketing. That song was everywhere. You couldn’t get away from it. By the way, do you still use that song? Because you should! It should be everywhere!”

Marsh retired as a player after the 1979 season and went into coaching at New York United and the Carolina Lightnin’, but the pull to return to Tampa Bay and the Rowdies was too strong to ignore. He re-joined the club as coach in 1984 after it moved on from the NASL and he remained in that position for several seasons. Tampa has remained his permanent home base ever since.

He now hosts the digital radio show Grumpy Pundits on SiriusXFC several days a week with co-hosts Tommy Smyth and Tom Rennie. The show, which breaks down all of the big stories and events in the world of soccer, began with just Marsh and Smyth in 2015 and has steadily increased its reach over the last seven years.

“The show has been so much fun,” he said. “It started out very small and, like anything, has taken time to grow into what it is now, which is great. I’m hosting three days a week now and we’re really enjoying what the show has become. It’s great fun. Everyone should come check it out.”

With Marsh still based in the area, he has made it to the occasional Rowdies game here and there. Don’t expect him to ever make a big fuss about it, though.

“I’ll go with my hat and sunglasses on. It’s sort of my disguise," he joked. "I’m not interested in making a big deal. I’d rather not overshadow things for anyone. Sometimes it’s OK to move on and focus on the present. I love being a grandfather. But I’m still in touch with teammates and the Rowdies fans. Those relationships are still going to this day. What made the Rowdies was that togetherness with the fans. That won't go away.”