Rowdies Remain in First with a Point in Pittsburgh 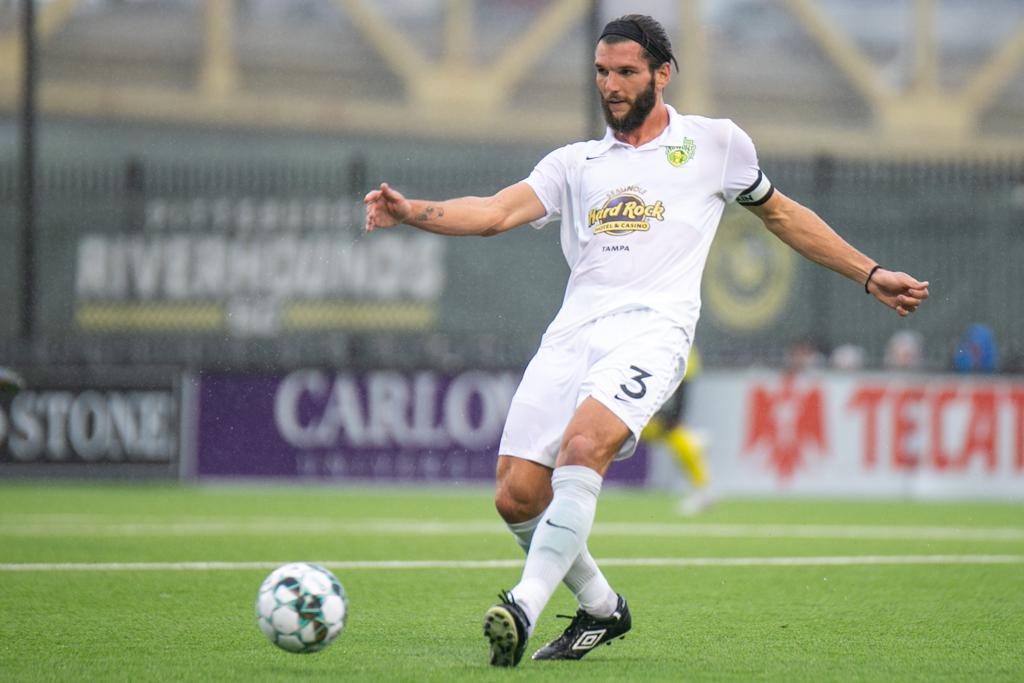 The Tampa Bay Rowdies recorded their first draw in over a year on Wednesday evening, finishing with a 0-0 result at Pittsburgh Riverhound SC’s Highmark stadium. Both sides were superb in staying organized defensively and, as a result, both sides struggled to create meaningful opportunities in the final third.

The last time the Rowdies ended a match in a stalemate was with a 1-1 result with Miami FC back on August 16 of the 2020 season.

“I think you’ve got to respect the point tonight in a very difficult environment, on the road against a team that’s right at the top of the table,” said Rowdies Head Coach Neill Collins. “We’re not 100 percent satisfied, but we’ll take the point and move on.”

Tampa Bay had a fortuitous look at goal in the early stages of the match as a heavy rain came down in Pittsburgh. Rowdies defender Jordan Scarlett played a hopeful long ball into Pittsburgh’s box which forward Jordan Adebayo-Smith went up for. The ball ended up bouncing off Adebayo-Smith’s back and started rolling toward goal as keeper Danny Vitiello was caught out of position after coming out to claim the long ball. However, one of Vitiello’s teammates kindly swooped in to clear the ball before it came close to the line.

Pittsburgh eventually began to gain a foothold in possession, but were shut out from any whiff of goal in the first half and the Rowdies ended up with best effort of the half. A long thrown in from Conner Antley into the box caused problems for Pittsburgh as the attempted clearance fell for Wyke 20 yards from goal. The midfielder blasted his first touch on goal but too close to Vitiello and the keeper was able to make the save.

The Rowdies came close to finding a go-ahead tally just past the hour mark when midfielder Lewis Hilton launched a long-range free kick that dropped on a dime in font of Pittsburgh’s goal. Steevan Dos Santos was lurking in the area, forcing a Pittsburgh defender into a desperate clearance attempt that required a tough save by his own keeper Vitiello.

After limiting Pittsburgh to no shots on goal all match long, the Rowdies gave the hosts a promising chance to score with six minutes to go. A scuffed clearance from Scarlett ended up at the feet of substitute Louis Perez, who promptly lifted a shot from way out over keeper Evan Louro. The attempt dipped back down but not quite enough and ended up clanging off the crossbar and back into play.

As nerve-wracking a moment as Perez's strike was, the Rowdies managed to finish the night without allowing a single shot on goal. They accomplished the same feat in last week's win over Hartford Athletic.

"We spoke about it after a couple of our performances, that we had to have that (defensive) aspect," said Collins. "When we're not at our free-flowing best, can we make sure we're not giving anything up? I felt we had the right balance tonight. We just need to continue that."

With the draw, the Rowdies and Pittsburgh remain even at 34 points at the top of the Atlantic Division standings. The Rowdies do hold claim to the top spot, though, by virtue of the goal differential tiebreaker. They also still have two matches in hand on Pittsburgh, giving them a chance to possibly create more room in the standings.

The Rowdies return to the field on Monday to face last-place Loudoun United FC on the road.