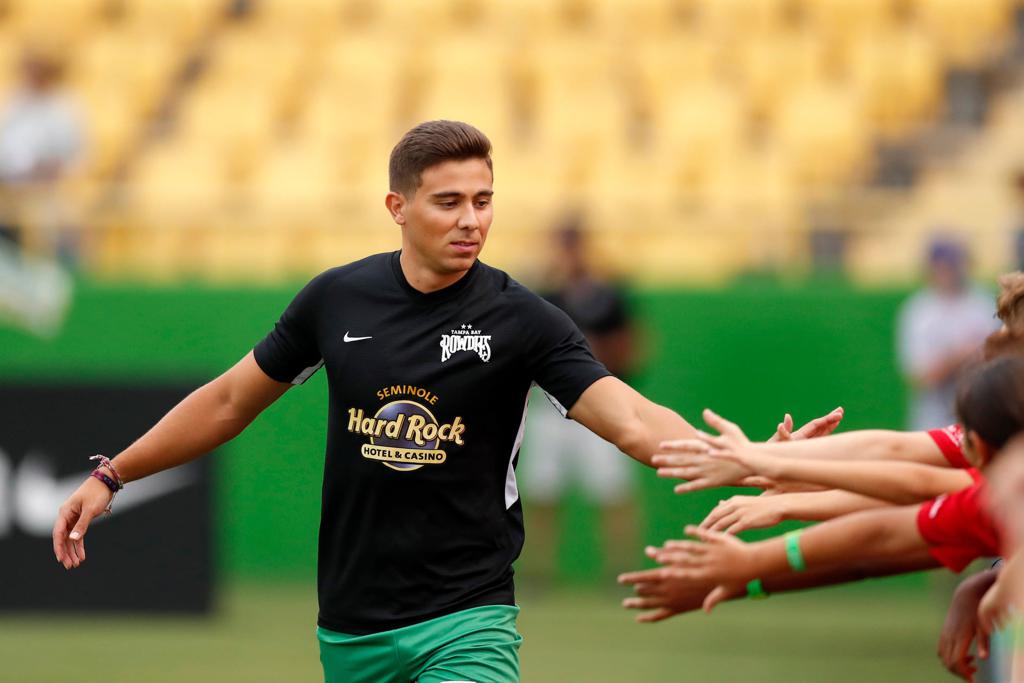 ST PETERSBURG, Fla (August 17, 2021) - The USL Championship Team of the Week for Week 17 of the regular season includes one of the Tampa Bay Rowdies' resolute defenders. After another standout shift for the club in last week’s 1-0 win over Hartford Athletic, Aaron Guillen has been named to the league's Team of the Week.

Guillen put in a largely flawless performance against Hartford as he won 4 of 4 tackles, won 7 of 7 duels, completed 48 of 55 passes, and also made 4 interceptions. His stellar showing that night played a large factor in the Rowdies limiting Hartford to just 2 shots all night, neither of which were on target.

This is Guillen’s first time earning the league honor this year. Guillen, defender Jordan Scarlett, and keeper Evan Louro are the only three Rowdies players who have played every available minute so far this year. Now in his second year with the club, Guillen has simply continued his high level of consistency from 2020, when he played every minute of that season.

Guillen currently leads the Rowdies with 35 interceptions and 108 dues won. The 28-year-old defender also notched his first professional goal on July 24 to help the Rowdies grab a 3-1 result over Loudoun United FC at Al Lang Stadium.

Guillen and all of Tampa Bay’s players have made the Rowdies one of the toughest squads to break down in the USL Championship. The Rowdies have allowed a league-low 44 shots on goal through 17 matches. El Paso Locomotive FC are the only other side in the league that has allowed fewer than 50 shots on goal this year.

View the full USL Championship Team of the Week below.

GK – Paul Lewis, Charleston Battery: Making only his second professional start, Paul Lewis recorded a two-save shutout against Loudoun United FC, including a key first-half penalty kick save to keep the game scoreless. The Battery were able to secure three points with a late winner in their pursuit of a playoff place.

D – Nick Hinds, Austin Bold FC: Nick Hinds helped Austin Bold FC’s back line contain Miami FC in a 0-0 draw on Saturday night. He won 6 of 7 duels and made six recoveries while completing 37 of 44 passes and recording a pair of shots as he joined the attack.

D – Aaron Guillen, Tampa Bay Rowdies: Aaron Guillen won 4 of 4 tackles and 7 of 7 duels while making four interceptions and completing 48 of 55 passes as the Rowdies held Hartford Athletic to only two shots in a 1-0 win at Al Lang Stadium on Friday night.

M – Speedy Williams, Miami FC: The Jamaican international helped his side to four points on the road over the week, including scoring two goals in Miami’s comeback 3-2 victory against Pittsburgh Riverhounds SC on Wednesday night. He completed 111 of 130 passes, won 3 of 3 tackles and made 15 recoveries across two games.

M – Robbie Mertz, Atlanta United 2: Robbie Mertz had one goal and two assists across a pair of games as Atlanta took four points from its week of action, and additionally completed 62 of 73 passes overall while winning 9 of 15 duels.

F – Phillip Goodrum, Atlanta United 2: Phillip Goodrum came on as a halftime substitute on Saturday against Sporting Kansas City II and made an immediate impact, notching a goal and assist inside 10 minutes before adding his second goal of the game to wrap up a 4-1 victory for the side.