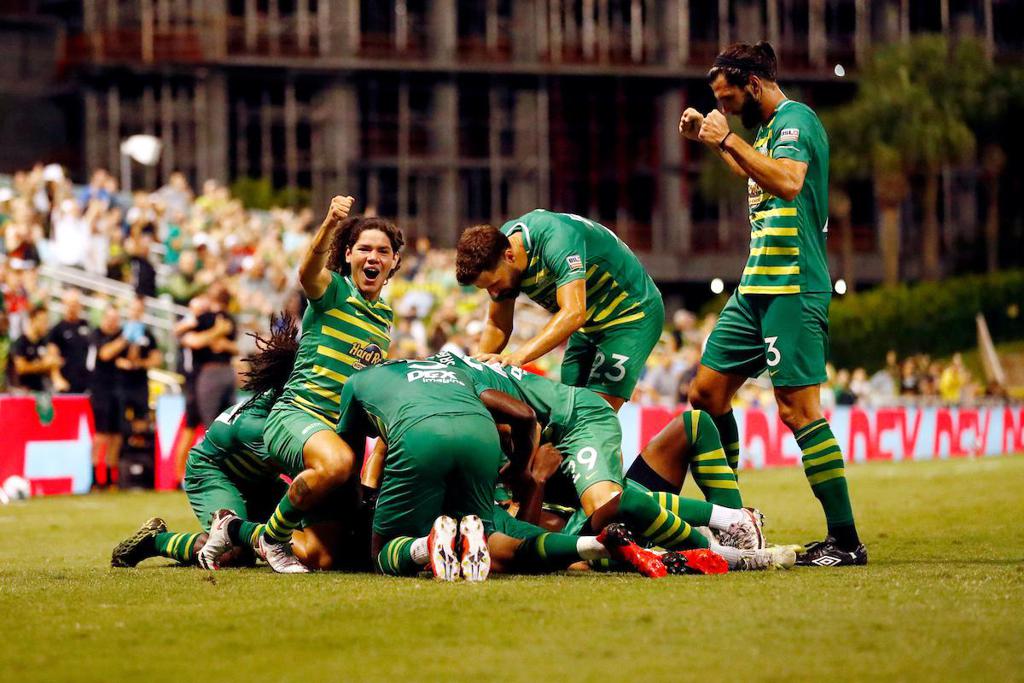 Friday’s 1-0 victory over Hartford Athletic was an important one for the Tampa Bay Rowdies. After a string of inconsistent results over the last month and change, the club was finally able to record back-to-back wins for the first time since early July.

It was also a welcome result as the previous matchup at Al Lang Stadium against Hartford on July 13 was one of the frustrating recent outings for the Rowdies. Hartford shut the Rowdies out and took all 3 points that night despite the Rowdies out-shooting them 22 to 11. The visitors were minutes away from blanking the Rowdies again this week despite a similar lopsided shooting advantage for the Rowdies (26 to 2 this time), but the Rowdies were never discouraged and eventually found their winner.

“The players stuck to their task and they got what I think they deserved," said Rowdies Head Coach Neill Collins. "You know with Hartford there’s always that threat and they showed that at times in the first half. So the players had to be 100 percent focused and I think that kept us very honest. I’m just pleased for the players that they got what they deserved for a lot of their hard work. I think their concentration paid off at the death.”

The win also put the Rowdies back on top of the Atlantic Division standings. Pittsburgh Riverhounds SC had its chance to retake first place on Saturday night, but instead the club fell 1-0 on the road to the Charlotte Independence. Similar to the Rowdies, Pittsburgh has discovered it’s not so easy to keep hold of that stop spot when every other club is gunning for you. Pittsburgh has now dropped two straight matches for the first time this season.

Tampa Bay heads to Pittsburgh this Wednesday for one of two remaining matchups between the two sides in the regular season. The Rowdies are only ahead right now based on the goal differential tiebreaker and they also have two games in hand on Pittsburgh, so this week’s match is a good opportunity to create some space in the standings. In three trips to Pittsburgh since joining the USL Championship, the Rowdies have yet to record a win (1 loss, 2 draws).

“The preparation obviously starts now,” Collins said of the upcoming Pittsburgh trip. “It’s such a tight conference. I’m sure you hear it from every coach across the league, but right now every game is so difficult, every game’s a challenge. Not just because of the opponent, but because of the travel, because of the surfaces, because of the environment you’re going to play in. This is a great challenge for us going into Pittsburgh. I’m looking forward to it and I’m sure the players will be. It’ll be like every game on the road, we’ll have to bring our best to bring home some points.”

Dos Santos and Tejada Return
Other than the 3-point result, fans who made it to Al Lang on Friday were also treated to the return of strikers Steevan Dos Santos and Juan Tejada. Dos Santos made the starting lineup and got his first action since going down with a broken foot at the end of May, while fan-favorite Juan Tejada earned his first minutes of the year after coming back from a hamstring injury suffered in the offseason.

“When you get to know these guys, you feel for them when they go through those injury struggles,” said Collins. “Juan has stayed patient and now he's back and hopefully we can keep him fit. We know he’s an asset... It’s just nice to have a bit of competition. I had to leave Zach Steinberger out tonight and, as much as I don’t like doing that to Zach who’s been fantastic for us, I actually do like the fact that we’ve got options and I hope we continue to have options between now and the end of the season.”

Despite the fact that he did not end up on the scoresheet, Dos Santos looked as much of a threat as he did back in May when he tallied 3 goals and helped the Rowdies start the season with 4 straight wins. The Cape Verde native narrowly missed with a left-footed strike taken as he was falling backward and also drew several fouls in dangerous areas.

“Steevan’s been a top player in this league for a number of years for a reason," said Collins. "He brings some great physical attributes. He was unlucky to not get a goal. I think the biggest thing for me is he’s a nuisance to play against. I had to deal with him as a player and I know how awkward he is, so I know even on a bad day you have to be at the top of your game. If we can force teams to be at the top of their game more often than not, that’s a big positive. I think he makes us better and I also think some of our players show him in a good light.”

Adebayo-Smith’s Persistence
While Dos Santos and Tejada understandably got much of the attention on Friday, it was Jordan Adebayo-Smith who stole the show with the game-winning goal in the 85th minute. The tally was his second in as many matches and his fourth overall this year.

Adebayo-Smith came on strong in his first season with the Rowdies, bagging two goals in the first 5 matches. He then unfortunately hit a cold stretch and had a couple notable misses in front of goal. Collins elected to leave him on the bench a couple times in recent weeks, but the 20-year-old attacker has come back with two strong performances in a row.

“You’ve got to go back to Charlotte when we lost 2-nil,” said Collins. “We didn’t bring Jordan on that night. I don’t think he was going through his best spell at that point in time. It’s just like anything in life, but particularly sport, how do you react to that? I think he reacted fantastically leading into New York, then he went on and started and scored. Then I left him out (tonight) because I felt it was a night for something else but he’d had another great week in training and he responded with a goal. That’s how you go on to have a career. That’s how you go on to have a contribution for a team. Everyone in our team should be looking at that, thinking it’s not about the coach’s decision to not put them on or pick them. It’s about how they respond. Because he went from not getting on to starting the following week. I’m pleased for him. He’s got so much potential, we’ve just got to try and get the best out of him.”

Stingy Rowdies
Friday might have been the most sound the Rowdies have on defense this year, and that is saying something considering how resolute the club was in the first half of the season. The Rowdies are the only team to have shutout Hartford this year and they’ve done it twice now. On Friday, the Rowdies limited Hartford to two total shots, neither of which was on target.