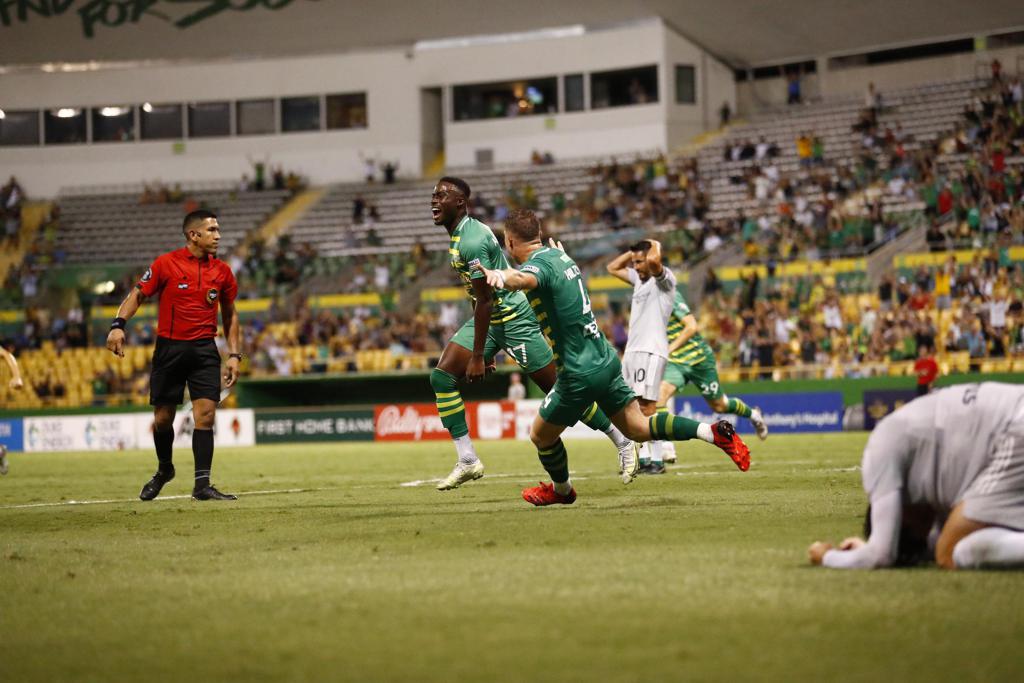 ST PETERSBURG, Fla (August, 13 2021) - For 85 minutes on Friday night at Al Lang Stadium, it looked as if the Tampa Bay Rowdies were doomed to suffer a similar result as the last time they hosted Hartford Atheltic.

The Rowdies out-possessed and out-shot Hartford by vast margins just as they did in a 1-0 defeat last month, but this go around the Rowdies were the one on the winning end of that same scoreline.

"Credit to the players," said Rowdies Head Coach Neill Collins. " There was a lot of good aspects to our performance and it would have been easy to get frustrated but they didn't. They stuck to the task and got what I think they deserved."

Substitute Jordan Adebayo-Smith was the one to break through for the Rowdies and secure all three points late into the match.

The Rowdies started the night on the front foot and didn’t let up on the visitors all night. In his first appearance since breaking a bone in his foot back in May, forward Steevan Dos Santos was a lively presence up top and came close to a headed goal five minutes in to the match off a corner kick from Lewis Hilton.

Aaron Guillen had the next look at goal and was thwarted well by keeper Jeff Caldwell. The rebound off Guillen’s attempt fell for Sebastian Guenzatti, whose ensuing shot clipped the shot of defender Thomas Janjigian. No penalty was awarded, though.

Guenzatti and Dos Santos each had promising opportunities on goal as the half wore on. Guenzatti missed a header wide right after midfielder Yann Ekra played a pin-point pass over the back line. Dos Santos missed to the opposite post, striking the ball with his left foot as hell backwards in front of goal.

Before making way for Lucky Mkosana in the 56th minute, Dos Santos came within a few inches from another headed chance. His replacement, Mkosana, then had the best chance of the night up to that point. Running on to a tremendous long ball forward from defender Forrest Lasso, Mkosana found the exact right line to split the defenders and slip into the final third. He struck the ball on frame with his first touch, but Caldwell was up to the task and parried the ball away.

The winner was eventually found through a set piece opportunity. Lewis Hilton’s initial corner kick was headed back from where it came by Lasso. Hilton then sprinted to regain possession and deliver the ball back in for Adebayo-Smith, who was stymied with his first attempt but found a way to thread his second shot through the crowd in front of goal.

The result seems to be a fair one given the Rowdies registered 22 shots compared to Hartford's 2, and none of those efforts from Hartford were on frame. That resolute performance allowed the Rowdies were able to record their first clean sheet since July 2.

"It was a good all-around performance and it needed to be, and we still only managed to beat them with a late goal at the death," said Collins. "That just shows you how good you have to play to get the better of any team in this conference. Obviously we're pleased we were able to get and hopefully we can just keep building on the performance."

With the win, the Rowdies move back into first place in the Atlantic Division standings by virtue of goal differential tiebreaker. They stand even at 33 points, though, with next Wednesday’s opponent Pittsburgh Riverhounds SC.