Rowdies Determined Ahead of Hartford Matchup 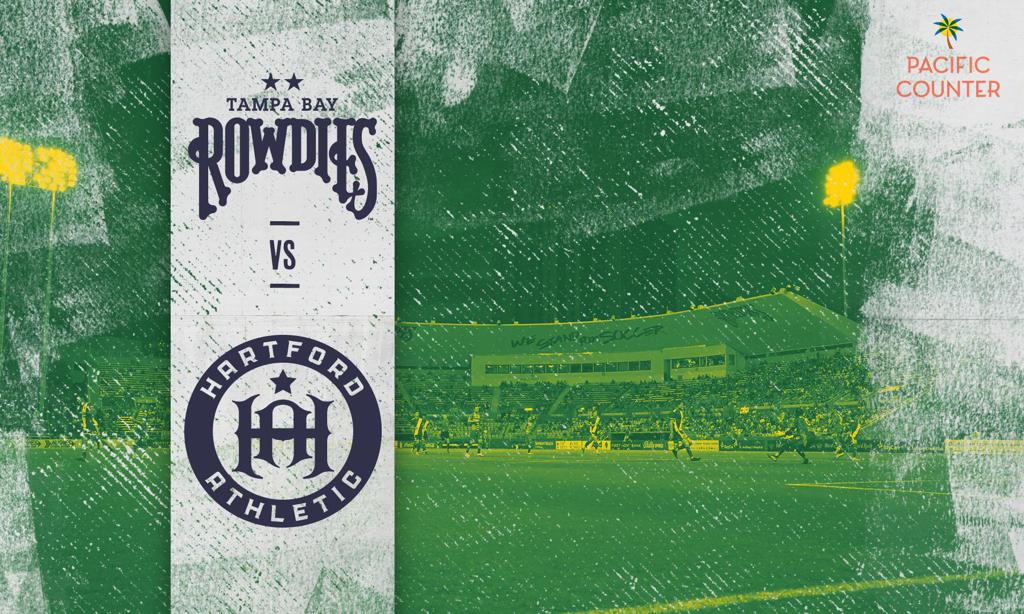 Pre-Game Show: Tune in for the pre-game show hosted by The Unused Substitutes live from Al Lang at 7pm T. The show can be stream on the Rowdies Gaming Twitch channel here.

After two weeks away, the Tampa Bay Rowdies are back in St. Petersburg and aiming to continue the momentum from last week's 2-1 win at New York Red Bulls II. This Friday's opponent is Hartford Athletic, a side that just took 3 points off the Rowdies at Al Lang Stadium 5 matches ago.

"I think the players were very focused going into New York,' said Rowdies Head Coach Neill Collins. "As you can see last night when New York played Charlotte, (New York's) environment and their style is difficult. I thought we picked up a deserved win and the players are looking to build on it. The mood is good, the mood is determined."

The win in New York was an all-around solid performance from the players, but Max Lachowecki stood out with a goal and an assist. Lachowecki was  a late addition to the starting lineup in New York after Leo Fernandes picked up a knock the day prior and he made the most of just his second start of the year.

"I’ve been in the league long enough to know you play different roles on different teams," said Lachowecki. "I’ve been the guy that plays 33 games in a season and, not to say I couldn’t do that now, I’m just in a different role and a different team. Sometimes it can be frustrating. This is a very talented team, a very talented group of guys. Sometimes you find yourself on the out. That was the case at the start of the season, but with soccer you know your shot is going to come at some point and you’ve gotta be ready. That’s one thing I’m very proud of. That’s not just me. There are other guys on the team who do that as well."

Lachowecki's mentality to stay committed even when he's not getting regular minutes is a huge reason why Rowdies Head Coach Neill Collins has so much respect for Lachowecki as a player and a leader in the club's locker room.

“The biggest thing about Max is he’s always the same,” said Collins. “By that I mean, whether he comes on in the first minute, the 65th minute, or the 85th minute he’s always gonna give me 100 percent effort, intensity, and attitude. He understands what we want. He always channels his frustration in the right way, with the mindset ‘I’m gonna train hard and I’m gonna show you.’ That’s why Max is here.”

Hartford enters Friday's match off the back of a 4-2 loss to the Western Conference's Colorado Switchbacks FC.  Coach Harry Watling's side now sits fourth in the Atlantic Division standings but has also gone without a win in its last three outings. Expect Hartford to give the Rowdies another tough challenge as they did last month when the notched a win at Al  Lang.

"Hartford have had some really good results throughout the season," said Collins. "I think they’ve been in every game. They’re a threat. They’ve scored goals. We are going to have to handle their attack. That’s going to be a big thing. Every team they’ve played, they’ve caused them problems. We need to be ready to deal with that. They go on the front foot, which is an exciting thing to watch."

Since their trip to Tampa Bay in July, Hartford has added 17-year-old midfielder Kenan Hot, who has registered two appearances already and made his first start in the club's loss to Colorado.

A Different Type of Challenge

Everyone, especially the players, are happy to have a full season of soccer this year after the 2020 condensed season. However, with that return to normalcy comes a new challenge of readjusting to the rigors of long season and more games on short rest. Now that the Rowdies have reached the midway point of the season, avoiding a lull in the back half is something the players are mindful of.

"We’re 16 games into the regular season and last year we only played 16 games in the regular season," said Lachowecki. "Having it be almost a full year since guys have played a full 32 or 34 game season, it kind of sneaks up on you a little bit and you think alright we’ve still got 16 more games to go. That can mentally, maybe more than physically, be a little bit draining. I think our team is as good as any as being mentally equipped to handle that and that’s something I’m probably most proud of with our team, how prepared and willing we are to better ourselves and, even though we’ve had a few difficult moments, not to give in. Everybody seems to 100 percent bought in trying to weather that storm and it looks like we’re heading in the right direction and making our way out of that."

Several players that have been out for an extended period of time have either recently returned to the field or are nearing their return. Forward Steevan Dos Santos's has healed and will in all likelihood play some amount of minutes on Friday night. His addition will be a big boon to the Rowdies. Through just four matches in May, Dos Santos bagged 3 goals and helped create several goals for others.

With Dos Santos' return, as well as the imminent return of Juan Tejada, the Rowdies will become a bit more of an unknown factor again.

"The biggest thing for me and my coaching staff is we are planning for a lot of unknowns," said Collins. "How is Juan Tejada going to be better playing with a Steevan Dos Santos? How is Lucky going to benefit from having Juan and Steevan back over the next few weeks? How is git going to help when Dayonn Harris is back fit? How is that going to help our wingbacks when these guys are back? How is it going to help our number 10s -- Yann, Zach, Matt? I think we’ve adjusted relatively well and I think at times we could’ve done better without those names I’ve mentioned. But there’s a lot of unknowns. So for me, it’s not necessarily about what areas to improve, but it’s to find out how we can maximize once these guys are back. How successful can we be by putting these guys in the right position?... It all comes back to how can we get these pieces fit and then start utilizing them the right way."