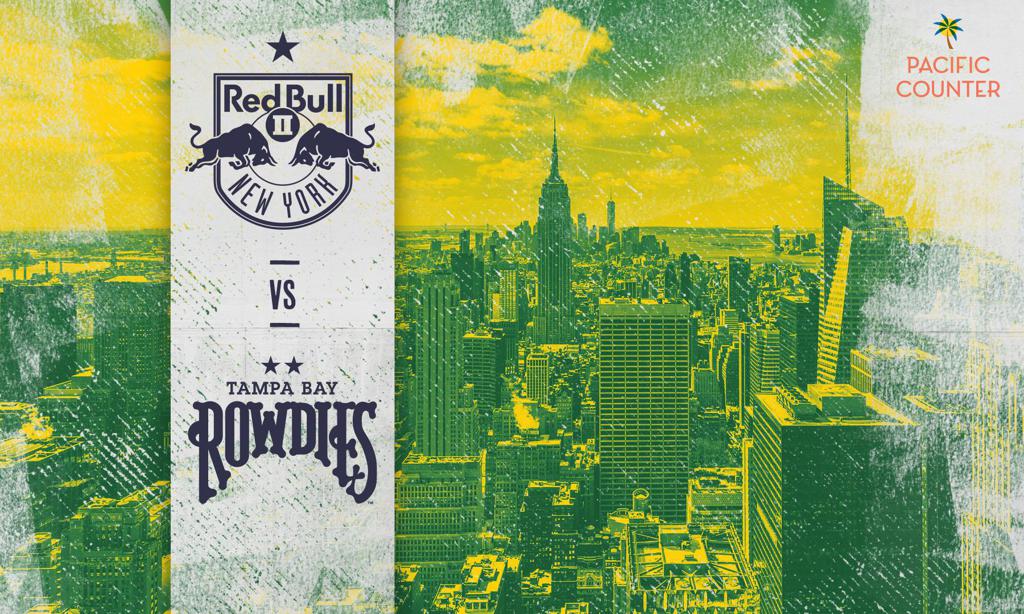 This Friday, the Tampa Bay Rowdies travel to face New York Red Bulls II for the second time this season. The club took all three points from its last trip to New York in June, with 20-year-old forward Jordan Adebayo-Smith nabbing the lone goal in a 1-0 result.

That match in New York was the first road trip of the year for the Rowdies and since then the club has had struggles finding points on the road. In their last five road contests, the Rowdies have lost four and won once. This Friday, the Rowdies will aim to return to the level they performed to two months ago

"We have definitely been poorer on the road this year than we ever have," said Rowdies Head Coach Neill Collins. "I don’t see so much the problem as us being on the road, the problem right now is we’ve just not performed. On the road you just have to have this stoic, resolute mentality that we’ve probably missed just slightly because maybe we’ve just been used to being dominant. Playing all those home games, (to start the season) you’re used to dominating and playing your way. It takes away some being on the road, knowing that you have to adapt and you have to be flexible and hang in there sometimes. That’s something we need to get back to and we will."

"Of course when we don’t have the results we want, we’re mad and we’re angry, but we’re doing the right things. We always work hard in training. Everyone has a good mentality. We know we’re going to turn this thing around and get better. That's all our focus right now, to keep doing what we’re doing and push even more to get better each day."

Everyone's Target
With last week's loss in Charlotte the Rowdies fell to second in the Atlantic Division standings, 3 points back of the new top team Pittsburgh Riverhounds SC. As the defending Eastern Conference champions, the Rowdies to be the target of every team lining up against them this year. Success ultimately turns you into a team each opponent is excited to test themselves against.

"We got ourselves to the top, but as they always say it’s much harder to stay there because it’s easy to motivate yourself to play against the top team," said Collins. "Teams have always been motivated to play against us but more so than ever because we’ve been a bit of a yard stick. That’s been what we’ve noticed and something we relish. Every team has to deal with adversity. Every team has to deal with suspensions, injuries. I just feel we’ve had a real condensed period where it's been much tougher than it has probably been since the start of my tenure in 2018. This year it’s been difficult every week to find the right team because you’re missing just vital pieces and the vital pieces affect other people on the team. That then makes it more difficult when these teams are so fired up. I think we’ve tried to keep it in perspective as a staff to not overanalyze."

Stretching the Squad
As some injured Rowdies move closer to their return, others move into the injured column themselves. Forward Lucky Mkosana now has two appearances off the bench under his belt after missing the first three months of the season. Forwards Steevan Dos Santos and Juan Tejada have progressed well in their respective recoveries and could be in line to return this month. However, Matt Srbely and Dayonna Harris have both been sidelined in recent weeks with their own knocks.

Srbely could be in line for minutes this weekend, but it would still be in a limited capacity, meaning other players will need to continue to carry the load this Friday.

"We’re a small squad and we've been pushed," said Collins. "It’s not just that we’ve had injuries. It’s that we’ve had injuries in key areas of the team. We’ve had Sebastian Guenzatti and Jordan AdebayoSmith as our only fit and available strikers until Lucky’s come back. Lucky’s only just now come back. We’ve got to be mindful building him up. You can’t just come back from the layoff he’s had and come straight in.

"Any team missing the talent we have at the top of the field are going to suffer. I think we still could have dealt with it better over the last month but I think now we’re going to come through that period. We learn when we go through these difficult periods. We’ve got a great team of lads that are willing to get better. They do all the right things. They respond the right way. We’ll learn from it. We’ll come out of it stronger. I’ve got no doubt we’ll come through this period stronger for the last half of the season. If we really do that and the lads continue to have that attitude we’ll actually benefit from those experiences and losses."