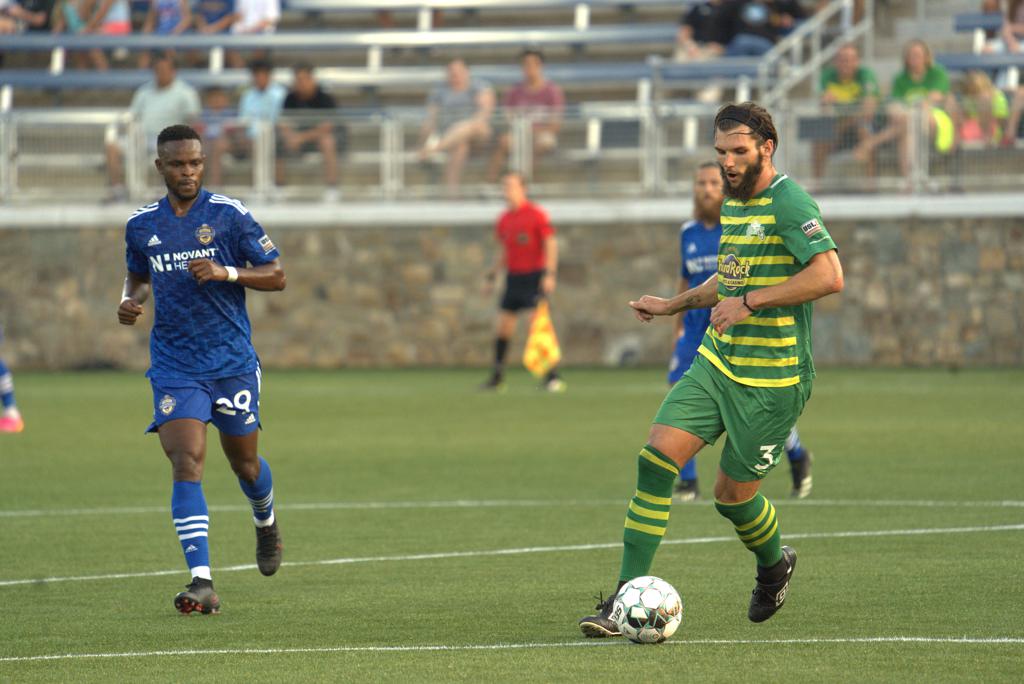 The Tampa Bay Rowdies became the first visiting team to fall at the Charlotte Independence’s new home venue on Saturday night. After playing to a scoreless stalemate through the first 45 minutes, the Rowdies allowed the hosts to grab two goals to claim a 2-0 win at American Legion Memorial Stadium in North Carolina.

Rowdies Head Coach Neill Collins kept the same starting lineup and bench from last week’s win over Loudoun United FC back at Al Lang Stadium. The only subtraction was Dayonn Harris, who suffered a hamstring injury coming off the bench against Loudoun.

For the first half hour or so in Charlotte, Collins was relatively happy with how things were shaping up for his side.

“I actually thought the start of the game was very good from our point of view," he said. "We were very happy for about 20 minutes and then, whether it was intensity or concentration, I felt we let the individual mistakes creep in. When you look back, it was a lot of individual errors that gave them encouragement. I’m not taking anything away from Charlotte, but it was our individual mistakes that gave them hope and opportunities. That was what was most disappointing about the performance.”

Charlotte’s Sylvain Marveaux and Brandt Bronico both found themselves with space and the ball at their feet in the box in the first half, but they both were off the mark with their efforts.

The Rowdies had the only attempt on goal in the first half. That belonged to right wingback Conner Antley, who collected the ball at the top of the Charlotte’s box and rifled a rising shot on target. However, keeper Brandon Miller got just enough on the ball to tip it over and out for a Rowdies corner. Unfortunately, Antley’s attempt was the only shot on target for the Rowdies all night.

Charlotte grabbed its first of the night just two minutes into the second half. After midfielder Laurence Wyke was stripped of the ball near midfield, striker Dane Kelly beat center backs Aaron Guillen and Forrest in a foot race for the ball in Tampa Bay’s half. Kelly made the most of his one-on-one chance against Evan Louro and slotted the ball past the Rowdies keeper.

Collins eventually went to his bench in the 60th minute in hopes of finding a spark, inserting veteran forward Lucky Mkosana and wingback Sebastian Dalgaard. Charlotte, though, were the ones to find a spark from a substitute. Irvin Parra, who replaced defender Christian Dean at halftime, pounced on a loose ball in the box after the Rowdies could not adequately clear a corner kick in the 62nd minute.

“At 0-0, there was nothing in the game. It was fine," said Collins. "Then we have a really poor turnover and a couple other mistakes after that and then you find yourself down 1-0 on the road and you have an uphill climb. I thought the 10 minutes after we lost the goal was poor and we let the game get completely away from us when it went 2-nil.”

Saturday’s loss coupled with Pittsburgh Riverhounds SC’s second half rally to defeat Hartford Athletic means the Rowdies have ceded the top spot to Pittsburgh. The Rowdies do still have a match in hand on Pittsburgh and have two more head-to-head clashes to come with the new top side in the Atlantic Division.

The Rowdies return to the field for another away match next Friday against New York Red Bulls II.