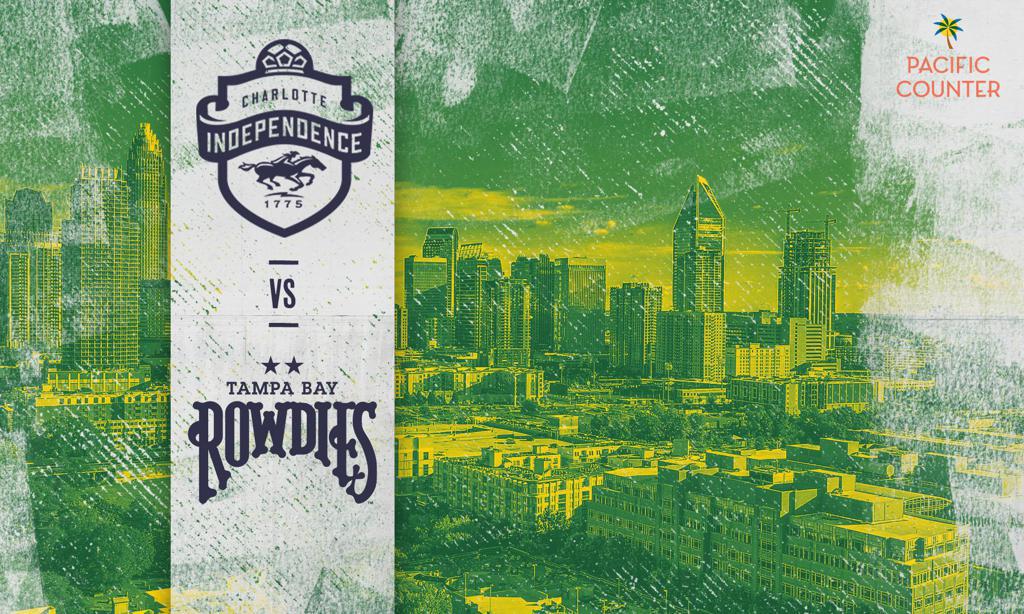 Watch: The can be viewed on ESPN+ here.

This Saturday, the Tampa Bay Rowdies return to North Carolina for a rematch with the Charlotte Independence, the club that handed them their first loss of the year back in June.

On that night in Charlotte, the Rowdies’ attack struggled to create meaningful chances and the hosts were able to convert on one of two opportunities from the penalty spot to earn a 1-0 win. Coming off another road match in New York a few days earlier, Rowdies Head Coach Neill Collins chose to rest regulars like Leo Fernandes and Sebastian Guenzatti for that match. Now, with a full week to prepare, the Rowdies will hope for a different outcome this weekend.

"You always first look at yourselves and we feel we underperformed,” Collins said of that first trip to Charlotte. “But credit to Charlotte, they were very well organized, they countered well and they made it really difficult for us to break them down. We need to learn from that. I think Charlotte have even improved since then with the players they’ve added and got back from injury. There's always lessons you're learning so that the players, when they're on the field can make those game-time decisions because they've been through it and experienced those mistakes in the past."

After ending their three-match losing streak last week with a 3-1 win against Loudoun United at Al Lang, the Rowdies will seek to take that winning mentality back on the road again. Their last two away days were just 10 days apart, South Florida rival Miami FC taking both those matches 2-1.

Aside from the obvious boost of snapping a losing streak last week, the Rowdies also took confidence away from the fact that they were able to bag three goals in a match for the first time since early May. If the attack can find that kind of consistency where they're consistently scoring multiple times a week, it will take a lot of pressure off the defense to be perfect week in and week out.

Captain Sebastian Guenzatti continues to produce at a consistent rate, adding his 9th goal of the year last week. Another player who has found his consistency in the last two weeks in Leo Fernandes, who has scored in the last two matches to raise his season total to 3.

Each game we just go out and try to create as many chances as we can," said Fernandes. "As long as we keep doing that, hopefully the goals will start coming just like last game. Be positive, create a lot of opportunities and the goals will come."

One attacker we know for sure we won't be seeing play for the Rowdies again this year is forward Foster Langsdorf, who announced his retirement from professional soccer this week. Langsdorf's return was highly unlikely anyway as he had returned to Minnesota United in MLS after joining the Rowdies on loan for 3 matches in June, though he remained eligible to return to Tampa Bay up until his retirement this week.

Langsdorf made 3 appearances for the Rowdies off the bench, tallying a game-winner against Loudoun in stoppage time in his final appearance. Langsdorf helped fill the gap for a time while Tampa Bay's other forwards recovered from injury. Lucky Mkosana made his return the field this past match for a short shift off the bench, while forwards Juan Tejada and Steevan Dos Santos continue to inch closer to their own returns.

After beating the Rowdies in June, Charlotte went on to win 2 of its next 3. However, the club has hit a snag recently and gone winless in its last 5, with 4 losses and a draw. That one draw, though, came at home against Phoenix Rising FC, who recently claimed the best record in the league after the Rowdies' recent skid.

"Charlotte was a well-organized team that actually had the best chances to win the game on the day.” Collins said of Charlotte’s draw against Phoenix. “It was 1-all, but Charlotte will look at that as an opportunity missed with the chances they spurned in the first half. It shows you how tough our conference is because we know how good Phoenix are. Charlotte definitely seem to have the ability to raise their game, particularly when they’re at home against some of the top teams. We know they can beat anyone in this league on their day. No question. They’ve got a lot of ability through the spine of their team."

Since Charlotte and Tampa Bay last met, Charlotte has added several new faces to its roster. The latest is Christian Fuchs, a name those who follow the English Premier League will be familiar with. Fuchs, 35, won the Premier League title with Leicester City during the 2015-2016 season. The Austrian born defender is on loan to the Independence from Major League Soccer's Charlotte FC, which will launch in 2022.

Charlotte has also added French midfielder Sylvain Marveaux, defender Adam Armour, keeper TJ Bush. Armour, 18, is on loan from Charlotte FC as well and just made his professional debut with the Independence.

Since the Rowdies were last in North Carolina, the Independence have moved into their newly renovated home at American Legion Memorial Stadium. The venue originally opened in 1937 and has gone through a major renovation project over the last two years, with most of the existing structure being demolished and replaced with new facilities for the Independence. In two outings at Memorial Stadium so far, the Independence have posted a draw and a loss. Still, they club has a solid overall home record  of 3W-1D-1L this year and the Rowdies want to avoid becoming the first team to fall in Charlotte's new home.

"I don't think it's surprising they're more comfortable at home," said Collins. "They are in a new stadium now, so I think that's going to be a challenge and a test. It's just this league -- when you add in the travel and add the other team in front of their home fans, it's just more difficult for a number of reasons."