Guenzatti Earns a Spot on USL Team of the Week 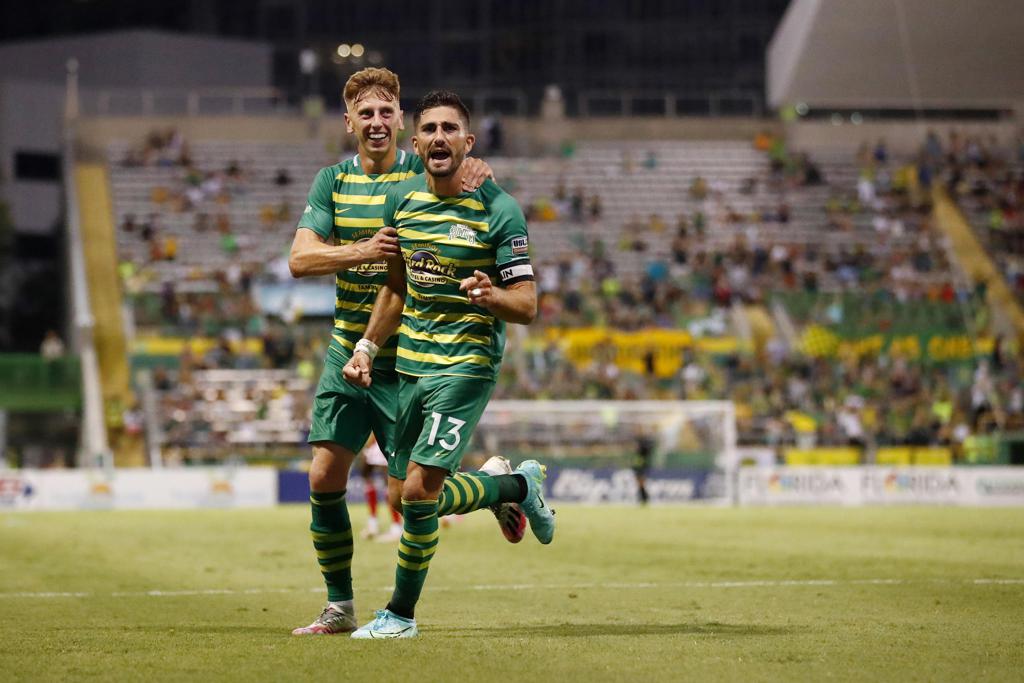 ST. PETERSBURG, Fla (July, 27, 2021) - The USL Championship announced the league’s Team of the Week for Week 14 of the regular season on Tuesday, with Tampa Bay Rowdies captain Sebastian Guenzatti earning a spot on the squad for the second time this year.

Guenzatti earned the league honor this week for providing the assist to center back Aaron Guillen in the 7th minute against Loudoun United FC and then burying the insurance goal in the second half to secure a 3-1 result this past Saturday. He also recorded 5 of the club's 11 shots on goal in the match as Tampa Bay bombarded the visitors with shots throughout the night.

Rowdies midfielder Lewis Hilton was also rewarded with a spot on the bench for Team of the Week for his assist, 5 key passes, and 15 recoveries to help the Rowdies snap their losing streak.

After Saturday’s tally, Guenzatti is now second in the USL Championship in scoring. Only Colorado Switchbacks FC’s Hadji Barry is ahead of Guenzatti with 13 goals so far. As the Rowdies near the halfway point of the regular season with their 16th match this weekend, Guenzatti is on a similar pace as the 2019 season in which he set the Rowdies single season scoring record with 19 goals.

The Rowdies have needed Guenzatti more than ever this year. With attackers Steevan Dos Santos, Juan Tejada, and Lucky Mkosana all missing significant time this year due to injury, Guenzatti has had to carry a heavy workload up top and he has done so with impressive consistency. Excluding keeper Evan Louro and Tampa Bay’s three starting center backs, Guenzatti has played the most minutes of anyone on the roster.

Here’s a full look at the USL Championship Team of the Week from Week 14:

GK – Joe Kuzminsky, Charleston Battery: Joe Kuzminsky achieved a Championship first in recording both a penalty-kick save and an assist in a shutout for his side as the Battery took a 2-0 victory against the Charlotte Independence on Friday night.

D – Jonathan Dean, Birmingham Legion FC: Jonathan Dean scored a stoppage-time winner to lift Birmingham to a 2-1 victory on the road against Indy Eleven on Saturday night, capping a performance that also saw him record one assist, six key passes and complete 43 of 51 passes.

M – Danny Barrera, Hartford Athletic: Danny Barrera recorded both assists in Hartford’s 2-0 victory against Miami FC – moving into third place in the Championship all-time – and completed 43 of 53 passes and six key passes overall in helping his side to victory.

M – Josh Drack, LA Galaxy II: Josh Drack notched a goal and an assist to help lead Los Dos to a 3-0 win against Oakland Roots SC on Sunday afternoon and was sharp on the ball throughout, completing 27 of 29 passes and winning 9 of 12 duels defensively.

F – Alex Dixon, Pittsburgh Riverhounds SC: Alex Dixon had a goal and assist in the Hounds’ 3-1 victory on the road against the New York Red Bulls II, and also won 7 of 11 duels and made 13 recoveries defensively in a fine two-way performance.