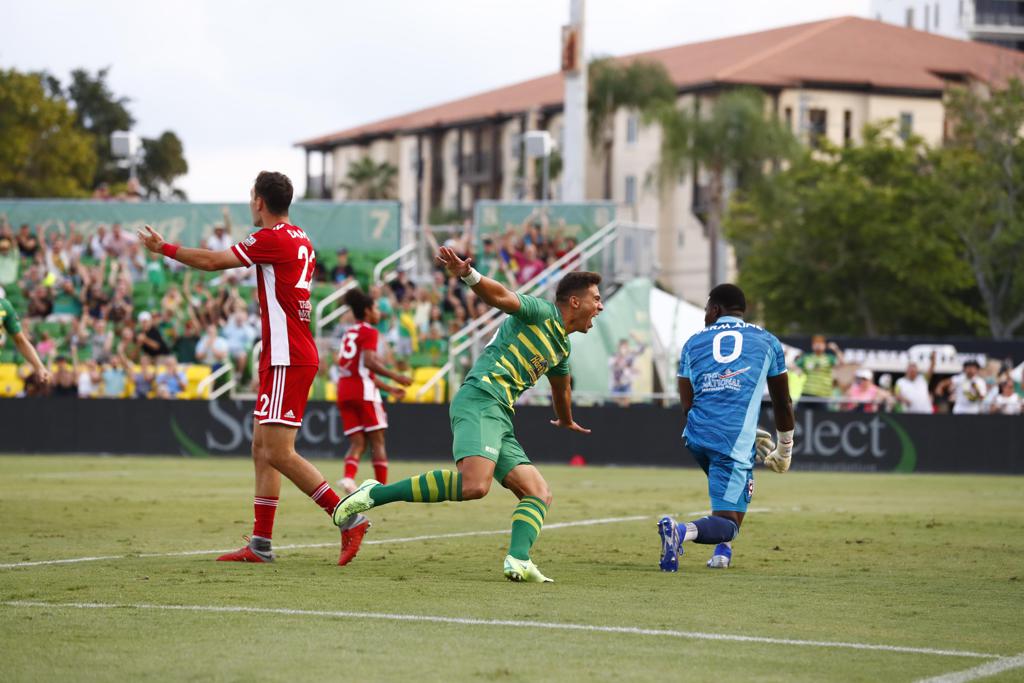 The Tampa Bay Rowdies got exactly what they were hoping for on Saturday night at Al Lang Stadium against the visiting Loudoun United FC. Tampa Bay snapped a three-match losing streak with a decisive 3-1 victory. Aaron Guillen and Leo Fernandes notched goals early in each half, while captain Sebastian Guenzatti recorded his ninth of the season late in the match to seal the result.

Guillen both initiated and finished off an attack just seven minutes in the match. Pushing forward into Loundoun’s half, Guillen flicked a ball into space for Steinberger, who then fed Sebastian Guenzatti in the box. The pass was just out of Guenzatti’s reach but he got enough on it to push it into Guillen’s path, who had sprinted into the final third. Guillen made the most of the moment and converted for his first Rowdies goal.

The Rowdies experienced a slight dip in momentum after the go-ahead goal, with the visitors settling into a comfortable stretch of possession. Loudoun nearly equalized off a corner kick during this spell, but center back Forrest Lasso stuck his leg out just in time to thwart an strike from Timmy Mehl that was on its way into the back of the net.

Eventually, the Rowdies regained control in the match and never relinquished it. Laurence Wyke was inches away from his first goal of the year, sending a strike past keeper Jermaine Fordah that clipped the far post and sailed right into Fordah’s arms. The Rowdies had a flurry of more chances before halftime, but Fordah made the stop every time.

Leo Fernandes was the player to break through for a second goal seven minutes into the second half. Receiving a pass from Lewis Hilton in the center of the field, Fernandes let loose with a left-footed blast that skipped over Fordah’s arms on its way into the net. The tally was Fernandes’ second in as many games.

Loudoun managed to pull a goal back with 20 minutes to go. Two minutes after entering off the bench, substitute Nicky Downs took a chance with a shot from distance that deflected off Jordan Scarlett and into Tampa Bay’s net. Keeper Evan Louro likely had the shot covered but was caught off by the deflection.

Fortunately, Guenzatti did not let the tension of a possible letdown build up and scored the third of the night just two minutes later. Receiving a pass from Yann Eka, Guenzatti streaked down the field and into the box before slamming home the insurance goal.

With the win, the Rowdies regained the top spot in the Atlantic Division standings over Pittsburgh Riverhounds SC. The Rowdies return to the field next Saturday for an away match against the Charlotte Independence.