Preview: Rowdies Aim to Return to Fundamentals Against Loudoun 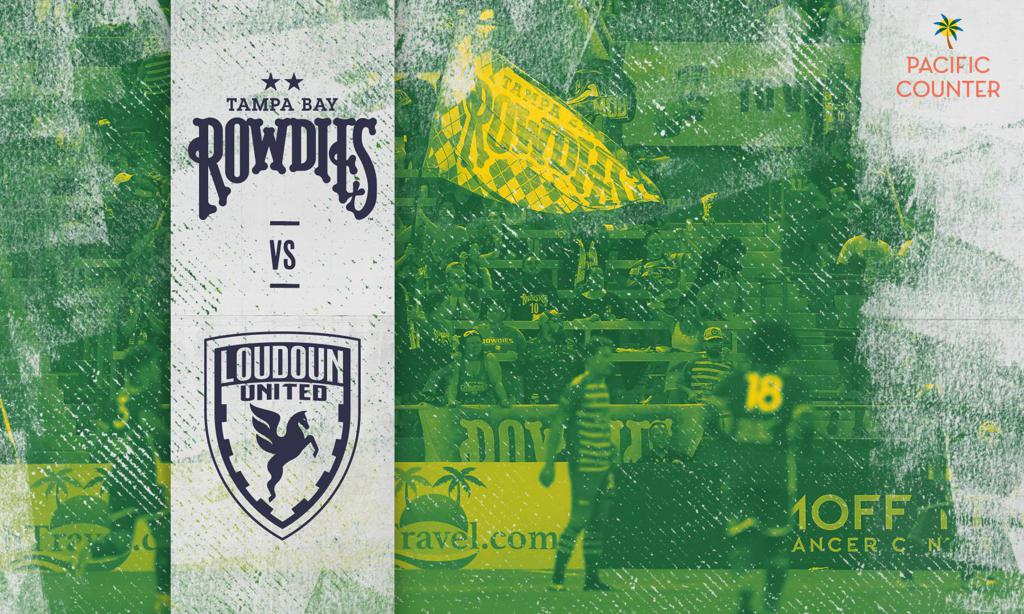 Tickets: Tickets are available for purchaseby clicking here or at the Al Lang box office starting at 2 p.m. ET the day of the game.

Pre-Game Show: Tune in for the pre-game show hosted by The Unused Substitutes podcast for analysis, guests, and giveaways. Former Rowdies forward Jochen Graf joins the show this week. The show kicks off live from Al Lang at 7 p.m. ET on twitch.tv/ROWDIESGG

Watch: The match can be viewed here on ESPN+.

The Tampa Bay Rowdies (8W-5L-0D, 24 pts) are seeking a much-needed rebound result this Saturday night at Al Lang Stadium after dropping a third straight match for the first time since May of 2018.

"When you’ve been on the kind of run we’ve been on for as long as we have, getting three defeats is disappointing, there’s no getting away from that," said Rowdies Head Coach Neill Collins. "For me, I look at it more from a performance point of view. We had disappointing performances in Miami. We had good spells in those games, but not for long enough... I know we've got players that are ready to put it right."

Standing in the Rowdies’ way of a positive result this week is Loudoun United FC (2W-10L-0D), a team with its own struggles and one that enters the weekend sitting last in the USL Championship’s Atlantic Division standings. Even with their challenges so far this year, Loudoun came just a few minutes away from earning a point off the Rowdies in their last trip to St. Petersburg in June. The Rowdies needed a stoppage-time winner from loanee Foster Langsdorf on that night to secure a 2-1 win. Langsdorf has since returned to Minnesota United FC in Major League Soccer.

“We’re mindful that Loudoun maintain high possession. They’ve done it against every team in the league," Said Collins. "That’s their style but they’ve obviously struggled in the results. But the performances have been pretty good because they’ve kept a lot of possession. We’re very mindful of, when we perform the way we want to perform, we generally get results I would say 9 times out of 10.”

The Rowdies recent three-match skid has allowed other teams in the Atlantic Division to close the gap in the standings. Pittsburgh Riverhounds SC are now level with the Rowdies at 24 points at the top of the table, but the Rowdies hold the edge by virtue of the goal differential tiebreaker. Miami FC, who account for two of the Rowdies' recent defeats, are also now just one point back of the Rowdies. Tampa Bay still maintains a game in hand on both Pittsburgh and Miami, but Hartford Athletic is within shouting distance at 20 points and has three games in hand on the Rowdies.

The Rowdies have managed to hold their top spot in the division despite a dip in offensive production. After tallying 10 goals through their first four matches, the Rowdies have only found the back of the net 8 times in their last 9 outings. At 18 goals scored, the Rowdies have now dropped out of the league's top ten in scoring.

With forwards Lucky Mkosana, Juan Tejada, and Steevan Dos Santos all still working their way back from injuries, the onus is on the healthy players to start producing goals again.

“There aren't many teams in the league that are able to lose three players like that and still manage to produce some of the results we've managed to get.," said Collins. "I've got to be careful that I don't start doing things that I don't really believe in. We need to be creative. I need to get better as a coach about how can we get more out of our attacking players that have different attributes. But it still comes back to the fact that we've got 5 strikers and 3 of them are out injured.... There's no panic here.  If we create the same amount of chances we did against Hartford, I think we'll have a good night."

Center back Forrest Lasso has emerged for the Rowdies since joining last year. When regular captain Sebastian Guenzatti was held out of the starting lineup for the first time this year in order to get some rest last week in Miami, Lasso was the one to take the captain's armband.

From his perspective, Lasso wants to get back to the fundamentals that brought them success in 2020.

"It’s pretty easy when you have a couple losses to have your judgment clouded, you’re a little biased because the losses are at the forefront," said Lasso. "For us, we’ve obviously not done things great but there are parts of the game I feel we have done well and things we obviously need to sustain… We’re not trying to reinvent the wheel or build Rome or something crazy like that. We're gonna do what the Rowdies have been doing, what got us rewards last year. We’ll do those things that pay dividends. I think if we can sharpen those edges, we’ll get the results that we need."

When the Rowdies turned the ball over on Miami’s first goal last week, Lasso laid out with a diving effort trying to cover the empty net. His attempt was unsuccessful, but the effort shows the desire he has to always push to be at his peak, even when things aren’t going your way.

“I don’t like complacency. I think I can always get better. I think the past 13 games this year, individually I’ve had some good moments, especially in terms of the beginning of the year. Like our team, and maybe all other athletes, you go through slumps, you go through waves. It’s a roller coaster ride. If we were 13 and 0 and had no goals against us, I would say I’m doing excellent. But that’s not the case. We have five losses and conceded goals recently that are frankly unacceptable. That kind of motivates us and inspires us, definitely me personally. I never think I’m good enough. I think I can always get better.”

Rowdies midfielder Yann Ekra is approaching an impressive USL milestone. The next time he steps out onto the field will be his 200th appearance in the USL Championship. That would make him just the 5th player in the USL to reach 200 or more appearances. Ekra, 30, joined the Rowdies in 2019 and, when healthy, has proven to be a key contributor in 31 appearances for the Rowdies. Prior to Tampa Bay, Ekra played for the Harrisburg City Islanders and Charlotte Independence.