Rowdies Held at Bay by Hartford in 1-0 Defeat 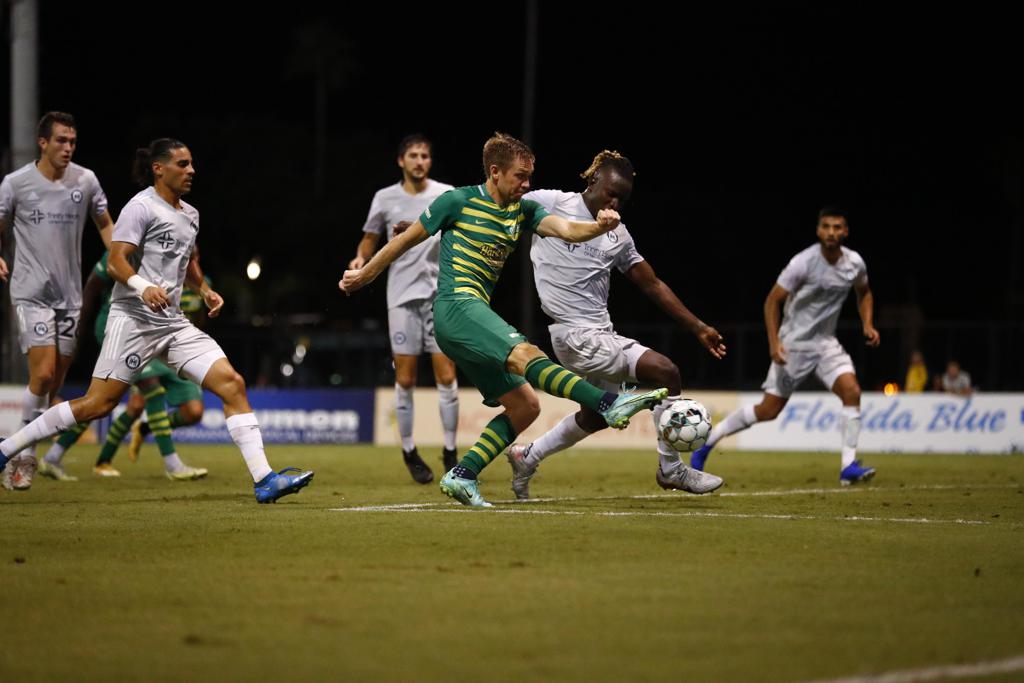 For the first time since 2019, the Tampa Bay Rowdies find themselves on the losing end of two straight losing results after Tuesday’s 1-0 defeat to Hartford Athletic. The visitors rode a first-half goal by loanee Derek Dodson all the way to three points at Al Lang Stadium as the Rowdies failed to find the back of the net despite outshooting Hartford 21 to 10.

The night might have gone very differently had the Rowdies converted on their first chance in the opening minutes when Dayonn Harris fed a pass in for Sebastian Guenzatti. The Rowdies captain connected with the delivery but lifted his effort over the goal.

Guenzatti managed to hit the frame in the 19th minute, cutting back in the box and firing a shot that clanged off the far post and out for a goal kick.

Just five minutes later, Hartford struck the first and ultimately only blow. Preston Tabort Etaka collected a long pass into Tampa Bay’s defensive third and then found the head of Dodson on the back post. Dodson made the most of the chance, burying his header into the bottom right corner.

Leo Fernandes tried to get the Rowdies level before halftime with a nifty backheeled effort that dribbled a foot wide of goal. Hartford’s keeper Jeff Caldwell then produced two crucial saves to deny headers from Guenzatti in quick succession.

The Rowdies ended up controlling possession in the second half again, but they took too long in creating meaningful chances again. With one of his first touches of the game, substitute Laurence Wyke powered a long-range effort well over the goal. Wyke had another go from distance later on in the match, one that was a bit more threatening as it curled a few feet wide of the goal.

Another substitute, Zach Steinberger, had the most promising look at goal of the night in the 83rd minute. After Hartford failed to clear a corner kick, Steinberger regained possession in the box and sent a shot on target at the near post only to be denied by Caldwell.

Caldwell produced another vital stop for the visitors in the first few minutes of stoppage time. This time he thwarted Ferandes, who redirected a cross sent in by Conner Antley in on frame.

In one final push deep into the 8 minutes of stoppage time, the Rowdies still could not find a way into the net. Another dangerous cross from Antley was blocked but then bounced off the top of the crossbar and back into play. Guenzatti and Fernandes each had a crack at an equalizer in the sequence, but both were blocked each time.