Guenzatti Caps 100th Match with a Winner Over Battery 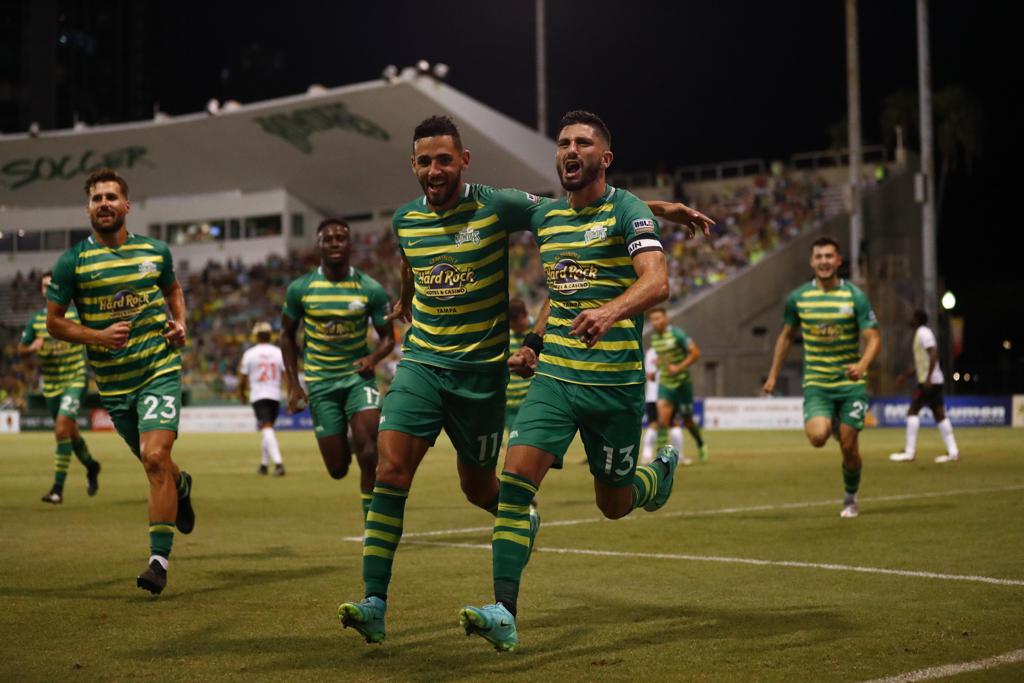 On the night of his 100th appearance for the Tampa Bay Rowdies, Sebastian Guenzatti did not disappoint. The Rowdies captain drove the Rowdies to their 8th victory of the season with his 8th goal of the campaign converting a penalty in the 68th to secure a 1-0 victory over the Charleston Battery at Al Lang Stadium.

The Rowdies dominated play throughout most of the night, but the the 3-point result looked in doubt as the game entered the final stages.

“You‘re always fearful because Charleston are a really resilient side, so you know they’re going to regroup, come out, make it more difficult in the second half,” said Rowdies Head Coach Neill Collins. “You’re just always hoping for the breakthrough. It was fitting that it was Seba who took advantage of a deserved penalty.”

Guenzatti nearly notched a go-ahead goal ten minutes into the match when he latched on to the end of a cross sent in by his longtime teammate Leo Fernandes. The Battery’s keeper Joe Kuzminsky, though, was up to the task and made the necessary denial at the near post.

The Rowdies continued to dominate possession throughout the first half and came close to scoring again at the half-hour mark. Sebastian Dalgaard cut inside from the right edge of the box and found a way to fed Zach Steinberger, who rolled a pass off for Fernandes to rip that sailed just over the goal.

The visitors were shut out entirely from the final third by the Rowdies in the first half. They were forced to play a majority of the match without one of their most potent pieces in Stavros Zarokostas, who had to exit with an injury in the 23rd minute. With Zarokostas out, the Rowdies managed to close down any attempt at a counter attack Charleston could muster.

“My biggest frustration in the first half was the boys played some excellent football, they really did, “ said Collins. “They implemented our game plan, they played with a lot of freedom and we didn’t quite capitalize on our great play.”

Substitute Jordan Adebayo-Smith helped set up the Rowdies for the game winner minutes after entering the second half. Dribbling around three defender’s in Charleston’s box, Adebayo-Smith was tripped up by Leeland Archer. Guenzatti then stepped up to the spot and did what he does best, burying the ball into the net for the 44th time in a Rowdies shirt.

“The way that everybody works, especially the subs,” said Guenzatti. “They came in and changed the game and made a huge impact. Getting the penalty allowed me to score tonight. Without them it wouldn’t have been possible. Having my family here, and obviously the fans, for my 100th game was obviously a dream come true. I didn’t get to do it at my other clubs, but I got to do it here.”

Charleston had one glimmer of a look at goal in the 72nd minute. A chipped cross from Burke Fahling feel for Joel Bunting on the back post, but he couldn’t direct his attempt on frame.