Rowdies Ride Another Gunzatti Goal to Victory in Hartford 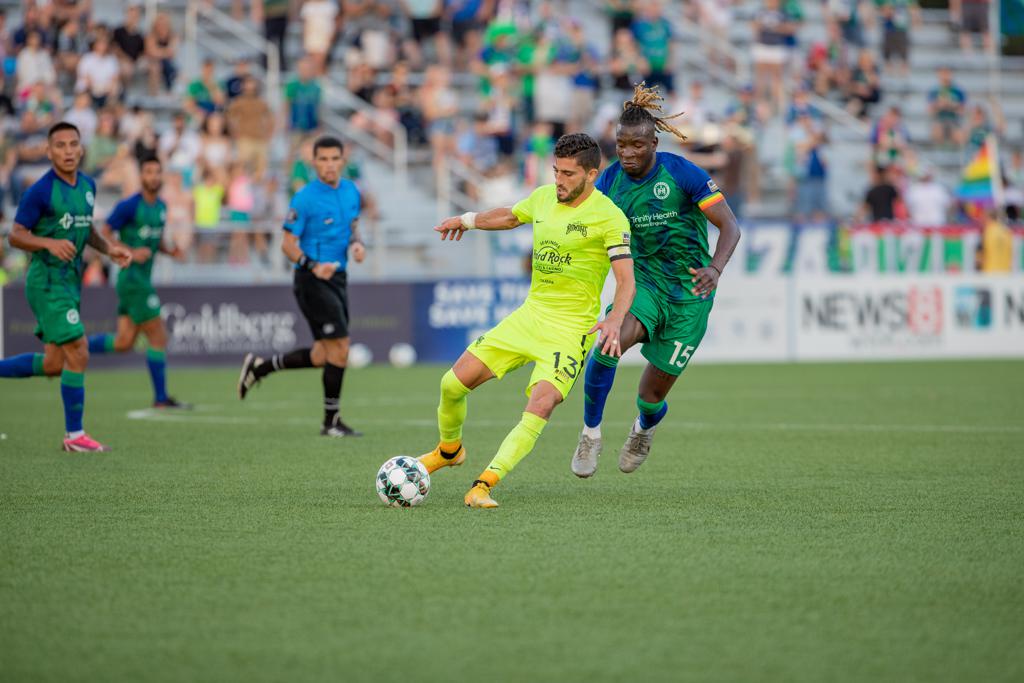 A first-half goal from captain Sebastian Guenzatti was what the Tampa Bay Rowdies needed to return to the win column Saturday night at Dillon Stadium against Hartford Athletic. The hosts had their chances, but in the end the Rowdies were able to record their fourth clean sheet of the season and pick up 3 more points.

Rowdies Head Coach Neill Collins had to contend with a couple late scratches in the lineup with Laurence Wyke and Yann Ekra being unavailable. Their absences left the Rowdies with just five players on the bench against Hartford.

“The players really stood up to be counted,” said Collins. “We only had four outfield players on the bench tonight as well. Hats off to the lads. I don’t know if I’ve ever been prouder of the players. And I’m proud of them pretty much 95 percent of the time. Tonight was just a lot of heart, a lot of character.”

Hartford threatened first on the night in the 11th minute, when Juan Carlos Obregon Jr find enough space at the top of the Rowdies box to fire a shot toward the near post. However, Rowdies keeper Evan Louro was in position to parry the attempt out for a corner that amounted to nothing.

The Rowdies then nearly helped Hartford gain the lead with an unforced error in the 25th minute. Center back Forrest Lasso played an errant pass back toward goal, forcing Louro to sprint back toward the goal line and clear the ball off the line at the last second.

With that miscue behind them, the Rowdies were able to gain a foothold in the match. Zach Steinberger put the ball in the back of Hartford’s net off an excellent delivery from Lewis Hilton only to be whistled for a foul while jockeying for his position on the back post.

Guenzatti, though, found the decisive goal in the 33rd minute. Midfielder Sebastian Dalgaard worked the ball well down the right edge of the box before lifting a cross to the back post that found Leo Fernandes, who powered a volley onto frame. Fernandes’ shot was blocked but not cleared enough by Nicolas Cardona, leaving Guenzatti to bury the rebound and put the Rowdies ahead with his seventh goal of the season.

Louro was asked to make two back-to-back saves in the 37th minute, getting low to deny a header from Walid Yacoubou Tulu and then a rebound effort from Alejandro Lara. The Rowdies keeper was beat by Obregon Jr just before the half when the attacker chipped the ball over him at the top of the box. Defender Aaron Guillen, though, was in position to head the ball away before it could cross the line.

In the second half, Guillen was judged to be guilty of a  foul just inside the box, giving Hartford a golden chance to equalize from the spot. Louro guessed right on which direction Obregon Jr was going to go, but it didn’t matter as the attempt was lifted well over goal.

Dayon Harris will likely feel he was robbed of his first Rowdies goal in the 65th minute. He seemed to time his run and finish off a cross from Fernandes to perfection only to be whistled for offside with a late flag from the linesman.

“The offside call on Dayonn is so disappointing because from our point of view it’s a great goal,” said Collins. “2-nil with 30 minutes left really makes them come out and hopefully gives us opportunities… it’s part and parcel of it. When you go on the road it really tests you. We don’t want to be looking for excuses.”

Harris’ disallowed goal didn’t end up mattering much in the final result as the Rowdies were able to ride out the rest of the match without giving up too many quality chances.

With the win, the Rowdies increase their cushion at the top of the Atlantic Division standings, four points ahead of Pittsburgh Riverhounds SC. The Rowdies return to Al Lang Stadium on Friday, July 2 for their first meeting with the Charleston Battery. Tickets can be purchased here.