Rowdies Run Out of Time Against Pittsburgh 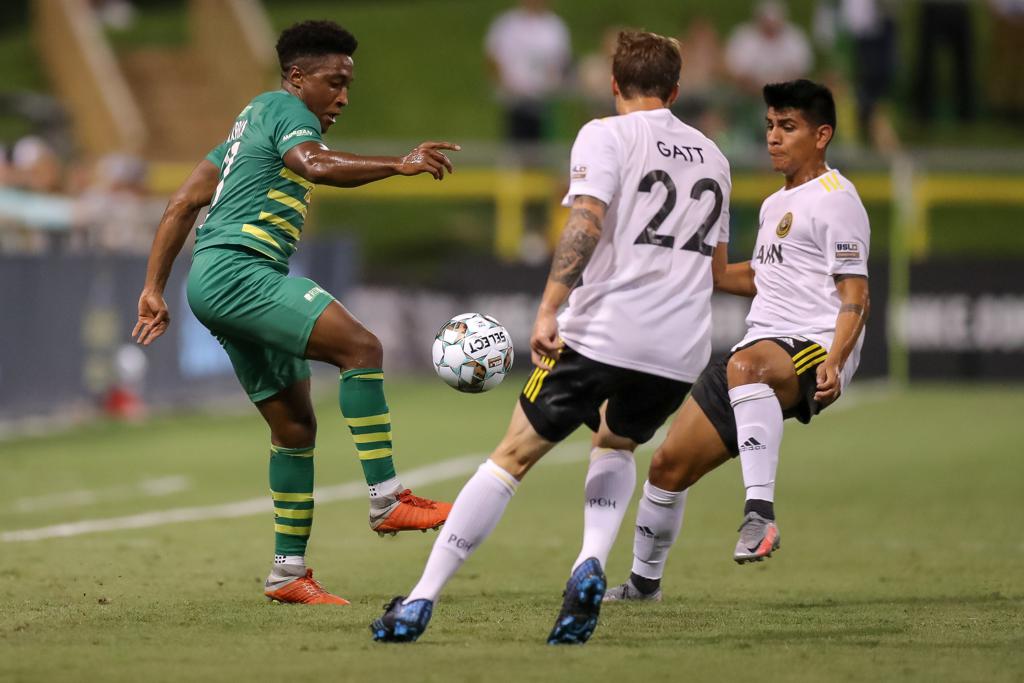 ST PETERSBURG, Fla (June 19, 2021) - The Tampa Bay Rowdies surged in the dying moments of Saturday’s match against PIttsburgh Riverhounds SC only to fall short with a 1-2 result at Al Lang Stadium. Rowdies captain Sebastian Guenzatti found his sixth tally of the year thanks to an assist from substitute Dayonn Harris to give the Rowdies a shot at taking something from the match.

“I thought in the last 10 or so minutes, the boys gave everything to get us back into the game,” said Rowdies Head Coach Neill Collins. “To be quite honest, we just ran out of time. That may sound silly but give us an extra minute and we’d have equalized. We had two fantastic opportunities at the death to equalize. I’m proud of the players and I think the fans should be proud of the players because they gave it right to the death and Pittsburgh had to fight to do everything to earn that win.”

Had the Rowdies managed to finish their first real chance of the night in the 13th minute the match might have played out differently. Midfielder Laurence Wyke scooped up a cross sent in by Conner Antley to the top of the box and fired a low strike that made it past keeper Danny Vitiello but was cleared away from Mekeil Williams before it could cross the line.

The  visitors then made the Rowdies pay with a deft counter attack in the 21st minute.Danny Griffin and Russell Cicerone orchestrated the attack, charing down the field quickly before Cicerone eventually fed a ball through the Rowdies back line for Griffin to bury into the back of the net.

Evan Louro was asked to keep the deficit to just one just after the half hour mark. The Rowdies keeper rushed off his line to snuff out a chance for Albert Dikwa, who was waiting to connect with a cross from Cicerone. Louro, though, got just enough on the ball to knock it away.

The first half lacked a rhythm as play was continually stopped for numerous fould. Just before the halftime whistle, Forrest Lasso picked up a yellow card for an apparent fould just a couple minutes after the Rowdies defender had been voicing complaints to center referee Sergii Demianchuk. With the way the game was being called, Collins swapped out Lasso out at halftime to avoid the chance at a second yellow. Yann Ekra came on in central midfield and Wyke shifted back into Lasso’s spot on the back line.

The Rowdies were the more threatening side of the first 10 minutes of the second half. Leo Fernandes tested Vitiello with a strike toward the bottom right corner but the Hounds keeper was up to the task, diving to his left to deny the chance.

Pittsburgh found its second against the run of play in the 54th minute with another counter, only this time it was Cicerone who provided the finish.

Harris came off the bench in the 71st minute and offered the spark the Rowdies had been seeking. After a lively few minutes of pressuring Pittsburgh down the right wing, Harris slipped past two defenders on the end line in the 92nd minute and delivered a cross right on the mark to Guenzatti in front of goal and he one-timed it past Vitiello.

The Rowdies continued to push for another goal but five minutes of stoppage time just weren’t enough to find a second and the Rowdies found themselves on the losing end of a result for the second time this year.

“We got punished tonight on their first two or three attacks," said Collins. "We didn't punish. We had a shot cleared off the line and kinda had the final pass missing but we dominated other aspects of the game. We just have to hold our hands up sometimes and say Pittsburgh had a good night. They were clinical. But I’m not gonna beat the lads up. After 8 games we’d have liked to be 8 out of 8 and we’d have liked to have won a home game, but considering everything and the guys we’ve got out and the changes in personnel we’re not able to make because of that, there’s a lot of positives to come out of tonight. We’ll dust ourselves down and recover.”

The Rowdies return to the field next Saturday with a trip to Hartford Athletic.