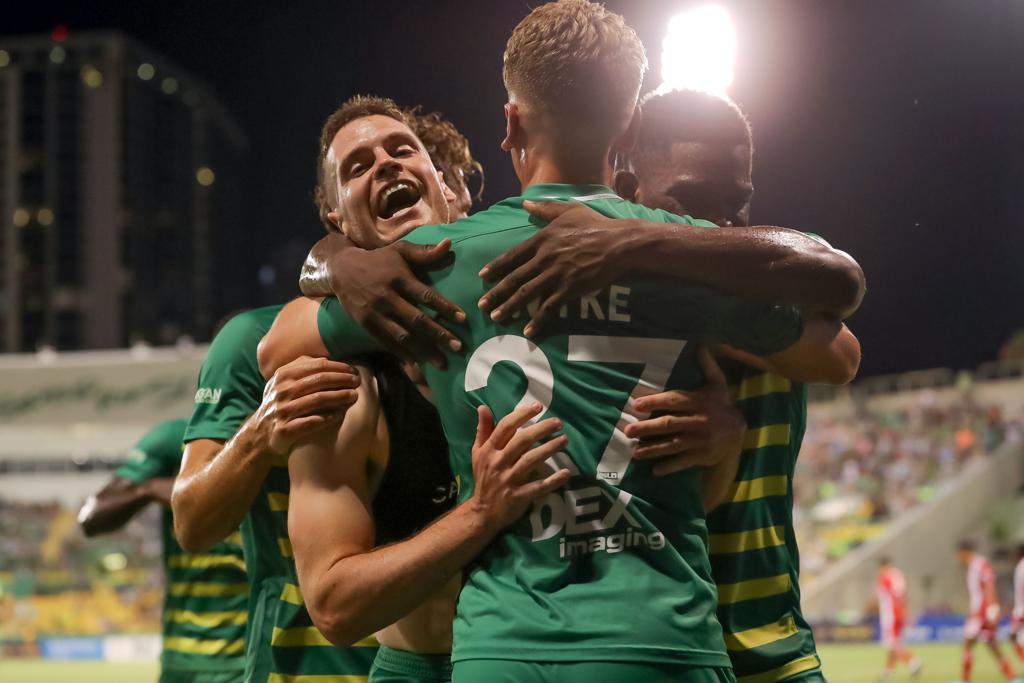 ST PETERSBURG, Fla (June 11, 2021) - The Tampa Bay Rowdies got back to their winning ways on Friday night, pulling off their first rally of 2021 to knock off Loudoun United FC 2-1 at Al Lang Stadium. With Al Lang open to full capacity for the first time since 2019, the Rowdies were keen to give the home crowd a victory, Rowdies captain Sebastian Guenzatti and newcomer Foster obliged with a goal each to seal the comeback win.

"That’s what we have to do, grind out results when we’re not at our best." said Rowdies Head Coach Neill Collins. "It says a lot about our boys that they were able to do that. Frustrated last week that we didn’t come back from goal behind, so really pleased we did that."

Tampa Bay started the with an uncharacteristic flub on the defensive end that allowed Loudoun to grab a go-ahead goal just four minutes into the match. The Rowdies were caught flat-footed as the visitors quickly worked the ball down the right wing, with Darluis Paz picking out an unmarked Robert Dambrot at the far post for a simple finish.

"I think when we look back we’ll be disappointed with a lack of concentration to do the right things, said Collins. "We’ve told them all week that Loudoun will punish you. They’ve got good players. The league table doesn’t do them justice and they showed that tonight. That’s something we’ll  need to learn from quickly."

Leo Fernandes helped set up the Rowdies’ first chance of the night in the 16th minute. The left wingback smoothly slipped a teasing cross into the box for Jordan Adebayo-Smith in front of goal, but the striker’s effort was sent wide right.

The Rowdies finally gained a foothold in the match for the final 15 minutes of the first half. Guenzatti finally provided the needed response in the 34th minute, Fernandes again played a part, this time striking the ball at goal and forcing Keegan Meyer into his first save of the night. The rebound fell for Connery Antley, who sent the ball back to the center of the box where Guenzatti was waiting to one-time it across the line.

Guenzatti came close to a second in the 63rd minute when he headed a cross sent in by Fernandes onto goal only to see Meyer make an outstanding save.

It took the newcomer Langsdorf coming off the bench for the hosts to find the winner they were seeking. Making just his third appearance as a Rowdies, Langsdorf jumped on the ball after a corner kick delivery from Fernandes clattered off a few players in front of goal. Langsdorf and Meyer closed in on the ball, but Langsdorf was a step quicker and slotted the ball between the keeper’s legs.

The Rowdies stay at Al Lang next week as they host Pittsburgh Riverhounds SC for the second time.