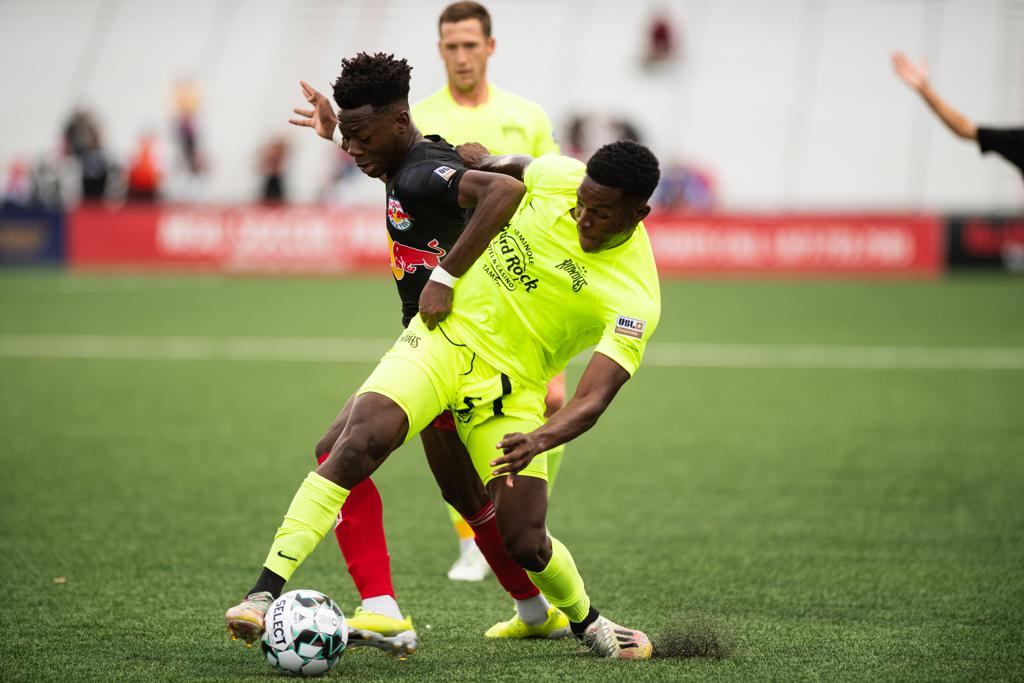 A first half goal from youngster Jordan Adebayo-Smith was the difference for the Tampa Bay Rowdies against New York Red Bulls at MSU Soccer Park on Saturday night. The Rowdies come away from their first road fixture with a 1-0 win, their fifth straight victory to start the 2021 USL Championship season.

This is the first time the Rowdies have ever won their first five to start a season and also their first five-match winning streak of the modern era. Another win on Saturday would match a league record for consecutive wins to start a campaign.

"To come off such a long layoff and for the players to pick up where they left off is a credit to them and a credit to their togetherness helping the new players settle in," said Rowdies Head Coach Neill Collins. "I think one of the most exciting things is no one’s getting carried away. Even in the locker room, there’s a, (attitude) of we need to improve in certain areas that I can sense."

Both sides pressed the issue with positive play in the opening half hour, though it was the Rowdies who earned the first attempt on frame. In the 27th minute, Zach Steinberger kept a sequence alive with some hustle at the edge of New York’s box and fed a pass for Sebastian Guenzatti, who turned toward goal and sent a shot right at keeper Anthony Marcucci.

Tampa Bay’s next effort on goal was on the money. Deep in the Rowdies’ end of the field in the 32nd minute, midfielder Lewis Hilton got out of pressure with a pass forward to his midfielder partner Jordan Doherty. Rather than wait for more teammates to come forward in support, Doherty one-timed a perfectly weighted ball through New York’s back line for Adebayo-Smith to run onto. Adebayo-Smith did not waster the breakaway chance, depositing his shot into the net as Marcucci dove the opposite way.

The hosts had their chances at an equalizer in the second half, but the Rowdies and keeper Evan Louro were always in the right spot to make the play and keep them off the scoresheet. Louro made stops to both Tom Barlow and Roald Mitchell around the hour mark. However, Louro’s most important task of the night were two rapid chances in the 90th minute. First he dove left to punch away a free kick from 24 yards out delivered by Mandela Egbo and then just few seconds later was called on again to thwart Mitchell from close range. A New York corner kick fell for Micthell in the box but Louro swarmed the attacker, trapping the ball with his feet to prevent it from slipping past him.

"Credit to Red Bulls, they reall pushed us hard the last 30 minutes," said Collins. "We couldn’t get enough control of the game so there are lots of areas to improve but you’ve got to consider we’ve still got guys learning… The big thing about this group is staying humble win, lose or draw and trying to get better for the next one. It’s certainly easier learning from wins than it does learning from defeats.”

The Rowdies stay on the road this weekend as the travel to face the Charlotte Independence. Charlotte fell to the Rowdies 3-0 back in the season opener on May 1. This match will be Charlotte's first time at home this year.