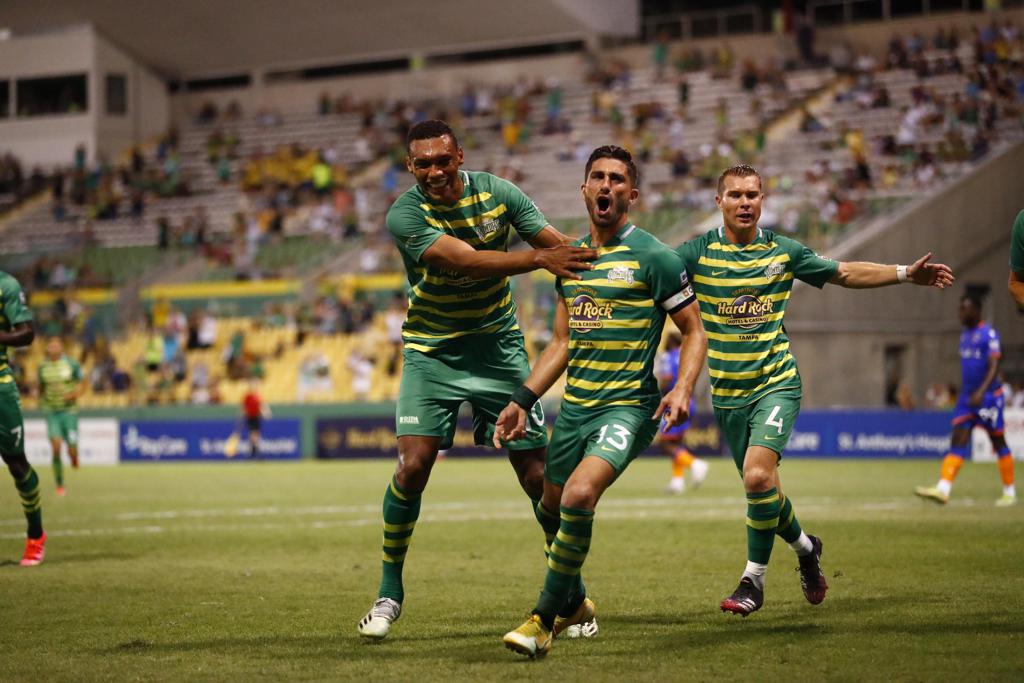 ST PETERSBURG, Fla (May, 22, 2021) -The Tampa Bay Rowdies extended their winning streak to start the year to four matches on Saturday night at Al Lang Stadium. The latest team to fall at Al Lang was in-state rivals Miami FC, with Rowdies forwards Steevan Dos Santos and Sebastian Guenzatti both goals in a 2-1 victory.

"This week the players trained fantastically well, they're attitudes been spot on," said Rowdies Head Coach Neill Collins. "They've been doing and saying all the right things but you've got a really tough team that's recruited well coming to Al Lang and it's difficult. I thought in the end we full deserved to win. We came through a couple of tough moments in the first half, showed great character in the second and some quality. Not every game in a 32-game season is gonna go our own way and we should get used to teams coming here and making it really difficult for us. The pleasing thing for me is the players dealt with that and came out the other end stronger."

Fresh off being named to the USL Championship Team of the Week for their showing last week against Phoenix Rising FC, midfielder Lewis Hilton and Dos Santos combined for the opening goal in the 12th minute. With a steady wind in his face, Hilton found the head of Dos Santos in the box after the forward had been left unmarked. Dos Santos took advantage with a flicked header past Connor Sparrow for his third goal in as many matches.

Miami turned the tides on the hosts a bit past the 25th minute, starting with a promising chance after Billy Forbes swiped the ball off Hilton and Ariel Martinez picked it up in stride in the Rowdies’ defensive third and fed Lamar Walker, who sent his effort off the mark. Martinez had a chance of his own three minutes later, firing in a low strike that keeper Evan Louro knocked out of danger.

The visitors finally found their equalizer in the 38th minute. Forbes penetrated down the right wing, took a hopeful shot from just inside the box that clipped the foot of Aaron Guillen and rose over Louro before dipping back down under the crossbar.

Hilton nearly put the Rowdies back out in front in the opening minutes of the second half but had a well-struck effort from 20 yards out cleared off the line by defender Callum Chapman.

The Rowdies eventually did regain the lead in the 78th minute after a stretch of sustained pressure on Miami. Dos Santos turned toward goal in the box and took a shot that clipped the arm of Sean McFarlane to give the Rowdies a penalty. Rowdies club captain then stepped to the spot and converted for his fourth tally of the year.

Miami continued to push for another goal that never came as the Rowdies comfortably rode out the rest of the night. The win brings them up to 12 points and guarantees they remain atop the Atlantic Division as they take the next week off.

The one sour note on the night was the exit of Dos Santos a few minutes of stoppage time due to injury. Miami's Paco Craig was shown a yellow card for a reckless challenge on Dos Santos that took the attacker out of the match with little time left.

The Rowdies next take the field on June 2 at New York Red Bulls II.