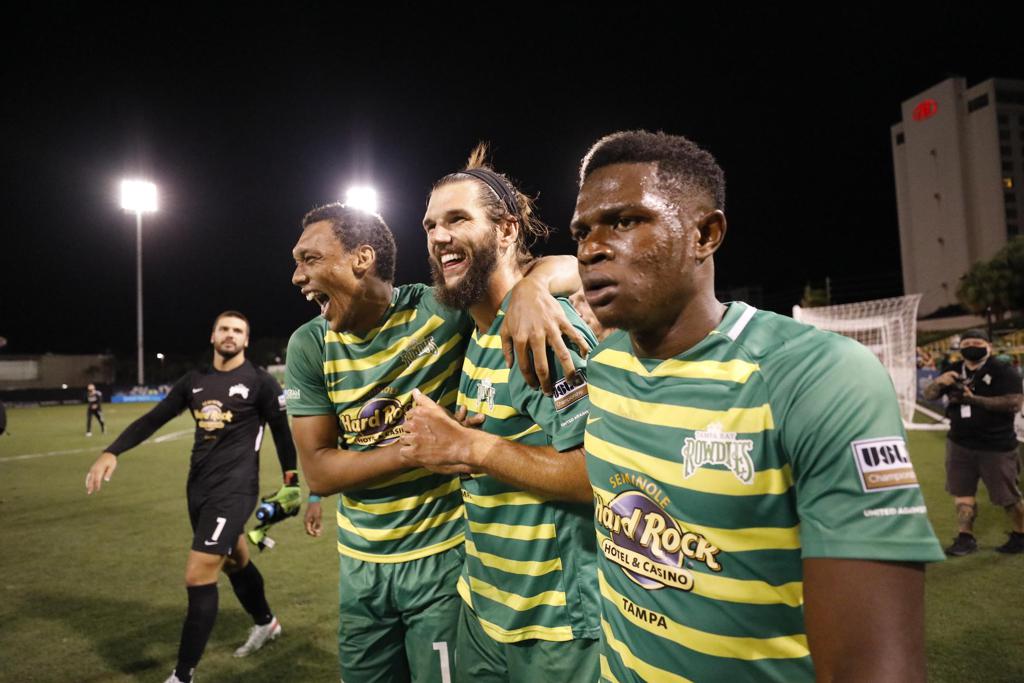 Dos Santos and the Rowdies gave the visitors an early gut punch just four minutes into the match. The Rowdies attacker found a pocket of space to streak down the left wing before whipping in a cross toward goal that reached defender Aodhan Quinn, whose errant clearance blew past his own keeper and into the back of the net.

The early goal was a change of pace from what both sides had experienced in their first two matches prior to Saturday. Phoenix had jumped out to early leads in its previous matches, while the Rowdies had slowly built up before finding their leads.

“Phoenix had started really quickly (in previous matches). So we’d emphasized that,” said Tampa Bay Rowdies Head Coach Neill Collins. “These are the scenarios where you develop as the season goes on. How do the players handle being one-nil up? They handled it great. They just went straight on the front foot and should have capitalized but then they had a (lull) and that’s when you’ve got to go through that experience to learn when the other team starts gambling and taking impetus because we’re one-nil up. Great learning moment. I thought the players handled it well.”

Dos Santos could have scored just seven minutes later when Zach Steinberger picked him out in front of goal with a pass, but he lifted his effort well over the goal.

Phoenix eventually found its footing as the half wore on and tested Rowdies keeper Evan Louro. Quinn attempted to make up for the own goal with a well-hit strike to the bottom right corner, but Louro got down to deny the shot and keep the Rowdies ahead. Louro was caught off his line a few moments later, though nothing came of it as Quinn fumbled the attempt and sent his shot wide of net.

The Rowdies finally doubled their lead at the hour mark. Midfielder Leo Fernandes didn’t end up on the scoresheet but deserves plaudits for setting up the chance when he forced Ben Lundt into a save with a blast to the near post and led to a Rowdies corner. On the ensuing corner, Forrest Lasso powered a header from the back post onto frame that required Lundt to stop with diving effort. The rebound fell for Dos Santos, who cleaned it up to record his second goal of the year.

Just seven minutes later, though, Moar pulled one back for Phoenix. Moar made the final stages of the match interesting with a rifled shot form 26 yards out that got by Louro. The Rowdies keeper and Phoenix’s Rufat Dadashov then both picked up yellow cards for tussling after the goal.

The final 20 minutes were tense, but the Rowdies always looked comfortable riding out the victory.

“Those last 20 minutes were played end to end full of passion, energy, emotion," said Collins. "That’s what everyone wants to see. You don’t want to see a soulless stadium, players going through the motions. Both fans will be proud of their teams. It was a different game compared to what we’ve had in the past. We were tested. It was great. I’m so proud of the players that in a moment like tonight they were able to play the same as we want them to every week and not have the occasion overtake. The credit tonight goes to the players as it always does.”