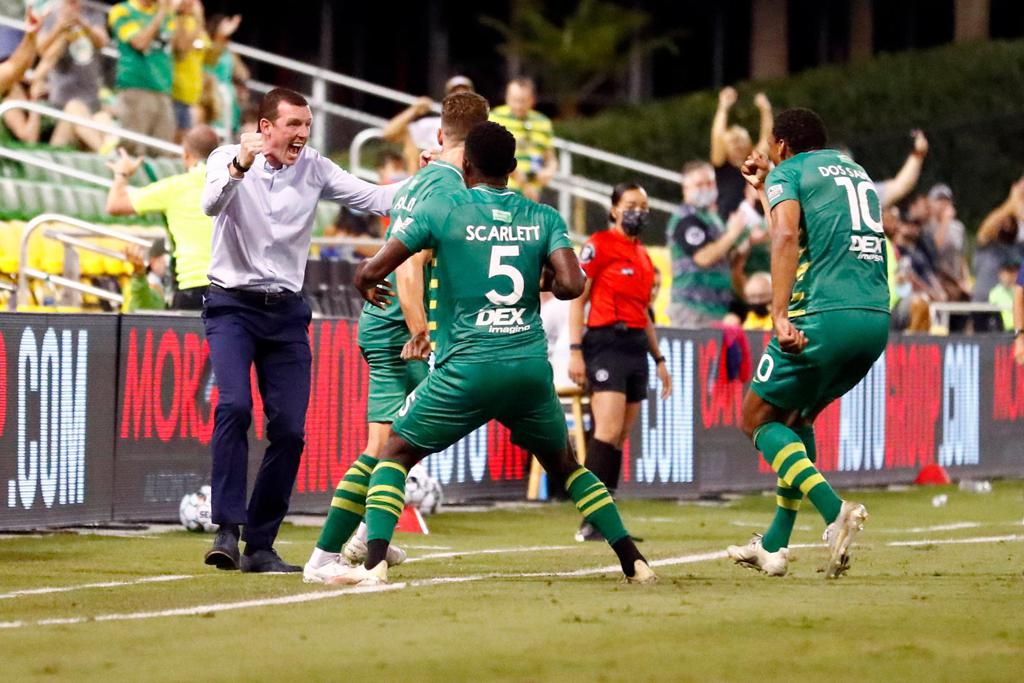 The Tampa Bay Rowdies opened the 2021 USL Championship season in perfect fashion on Saturday night at Al Lang Stadium. In front of 1,870 fans, the longest serving Rowdies, Sebastian Guenzatti and Leo Fernandes, notched three goals between them to help the Rowdies knock off the Charlotte Independence 3-0 after a sluggish start.

“I think as a player you have so much time off, you’re so eager, you’re out in front of fans. There can be a lot of nervous energy leading up to that,” said Rowdies Head Coach Neill Collins. “You can end up being a little flat. It took a little bit of the anxiety away to get that first goal and Charlotte had to change their game plan. First game – win, lose or draw you know you’re going to come away thinking there’s lots to work on. I’m just glad we got the result. We move on and we learn the same lessons without having dropped 3 points.”

There wasn’t much action in the opening 45 minutes, as both sides struggled to develop much in the final third. Newcomer Laurence Wyke had the first shot on goal of the night for the Rowdies with a low strike from outside the box that forced Charlotte’s Brandon Miller into a diving save.

Guenzatti grabbed his first tally of the night with a penalty conversion in the 58th minute after Wyke was clipped down by a Charlotte defender as the Rowdies charged into the box. Guenzatti went to his left and Miller went the opposite direction.

19 minutes later, Guenzatti doubled Tampa Bay’s lead as the Rowdies capitalized on a set piece opportunity. Lewis Hilton, who entered at halftime as a replacement in midfield, sent a free kick into the box that was headed on along to the left edge of Charlotte’s box, where the Rowdies’ Forrest Lasso was waiting. Lasso redirected the ball back across goal with a header straight to an unmarked Guenzatti, who headed the ball into the back of the net.

Guenzatti played set up man for Tampa Bay’s third goal and final goal. Just two minutes after Guenzatti’s second goal, he fed substitute Leo Fernandes a pass to the top of the box and the midfielder slotted it past Miller to seal the match.

“We weren’t great for the first 50 or 60 minutes of the game, but I don’t think they were the better team,” said Collins. “It was disappointing from a collective group that we didn’t bring more tempo and intensity. But I think there’s such a buildup to that first game, a bit of nervous energy too. There were definitely a few moments of concern. A lot to improve on, no doubt about that, but I think the players came through. Once we got the first goal, we certainly started to play the way we expect.”

The Rowdies are back at Al Lang again next Saturday to face Pittsburgh Riverhounds SC at 7:30 pm.

Full stats for the match can be accessed here.