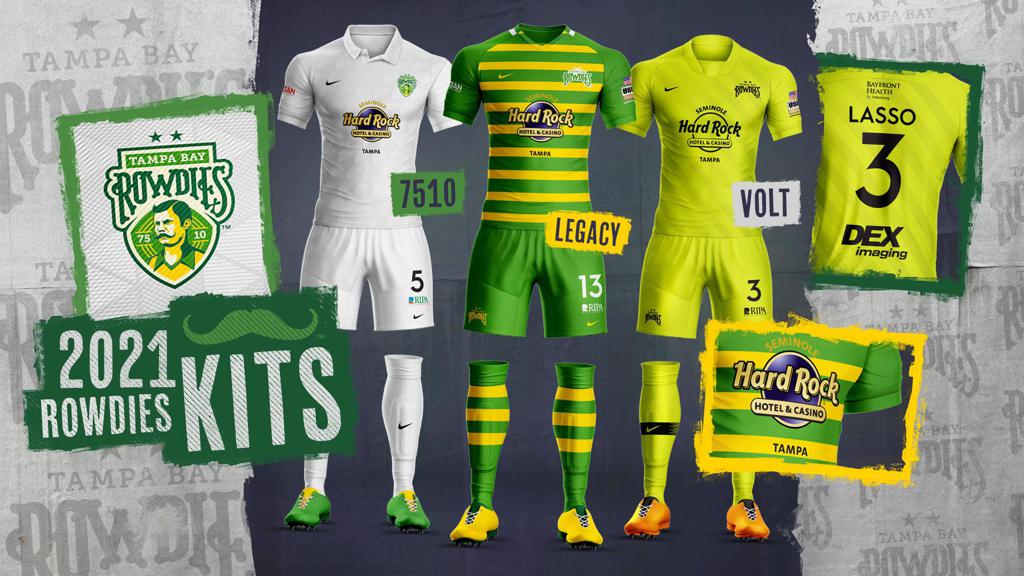 ST. PETERSBURG, Fla. (April 23, 2021) --The Tampa Bay Rowdies have unveiled the three kits for the upcoming USL Championship season, one of which will feature a new crest highlighting the unique heritage of Rowdies soccer.

The classic green and gold colors, so closely associated with the Rowdies, are still included. This year’s “Legacy” kit features jerseys with a thinner version of the green and gold hoops across the front. The Rowdies will continue to wear their famous hooped socks with this kit.

The “Volt” kits are also returning in 2021 with an updated look. The Rowdies first donned the volt-colored kits during Neill Collins’ first year as head coach in 2019, with the thought of having a bold look to go with the new attitude and intensity the club wanted to bring to their away matches. With 14 victories and five draws in 29 matches away from home during the last two seasons, the strategy seemed to work.

This season the Rowdies are also unveiling a new “7510” kit. This all-white look will also include a collar, and it will be the first time the Rowdies have worn a collar since 2013.

The one detail of the “7510” kit that stands out the most is the new crest. The idea of creating a crest for the Rowdies has been discussed since the club was relaunched. The Rowdies organization set out to create a crest that symbolizes the past, the future and what the supporters cherish in the present. This meant guaranteeing the famous Rowdies wordmark remained an integral element of any new crest.

“To me, my favorite element is the Tampa Bay Rowdies logo within this crest,” said Rowdies President Lee Cohen. “We’ve revitalized something that can be fun for an original 1975 Rowdies fan, a 2010 Rowdies fan, or a 2021 Rowdies fan. The Rowdies logo is still part of our iconic brand. It’s just now within a crest that embodies the Tampa Bay region, our brand, our supporters and the history of the club.”

In the soccer world, the year on a crest usually signifies a club’s founding year. This new Rowdies crest instead represents the distinctive story of the Rowdies with the number 7510. The Rowdies were the first professional sports team to represent the Tampa Bay region starting in 1975. They continued to play in various leagues before ceasing operations in 1993. The affection for the Rowdies persisted in the ensuing years, and the club was resurrected in 2010.

At the center of the crest is an updated version of Ralph Rowdie, the mustachioed player featured in imagery for the original Rowdies. The mustache remains, but this refreshed design was inspired by the look of the early players in England who helped establish the rules of modern football in the 19th century.

“The Tampa Bay Rowdies are nothing without our fans, ultimately,” said Head Coach Neill Collins. “That’s what every great sports organization is. You are the fans. You would not be here if it were not for them and their support. We have a fantastic set of fans, and I think they’ll be excited that the club is giving them something that is staying true to what this club’s about, just with a new twist.”

Visit RowdiesSoccer.com to view the 2021 schedule, secure tickets or learn more about the 2021 kit designs.