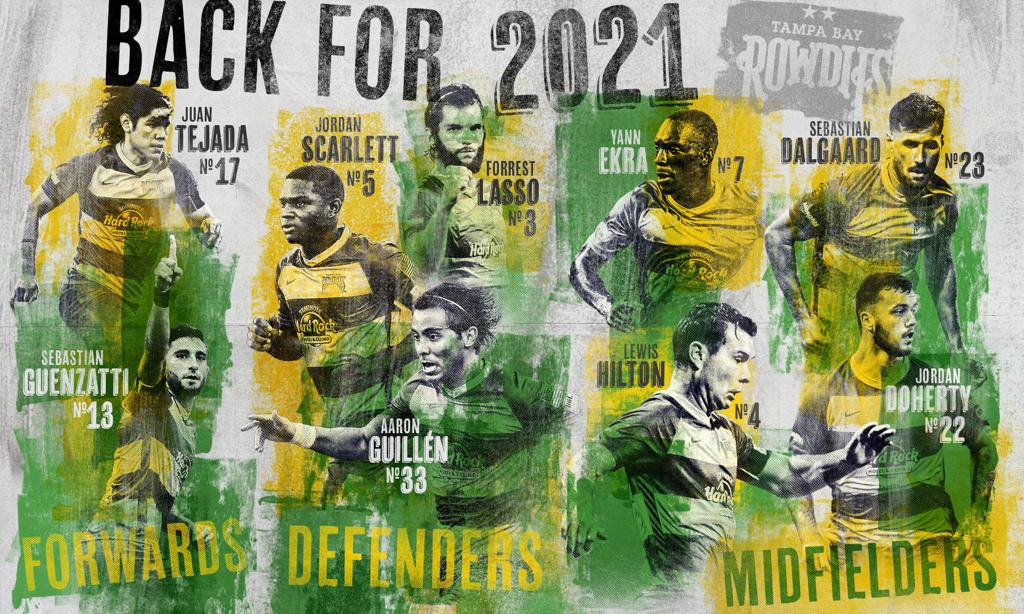 St. Petersburg, Fla. – Today, the Tampa Bay Rowdies announce a series of 2021 roster updates including retaining nine players from the 2020 Eastern Conference Champion team that recorded the highest points per game average (PPG) since the club returned in 2010.

Returning defenders include Forrest Lasso and Aaron Guillen. Lasso was named the 2020 USL Defender of the Year for the second time in his career. Guillen made 19 starts and will be going into his second year with the team.

Fan favorite Juan Tejada will be returning to the Rowdies in 2021 for his third season. He made nine starts and 19 appearances with the club and notched two goals and two assists.

Midfielders that will once again wear a Rowdies uniform in 2021 include Lewis Hilton and Jordan Doherty. Hilton made 12 starts and was ranked second on the team in chances created with 28. Doherty recorded one goal and two assists in 2020.

“We are excited to see the core of our team return next season and believe this group of players can build upon last season's success because they all share a collective desire to win, and that is exactly what we are looking for in 2021," said Rowdies Head Coach Neill Collins. "I would like to thank each player that was part of such a memorable season in 2020 and wish them all the best in the future.”

Forward and team captain Sebastian Guenzatti, defender Jordan Scarlett and midfielders Yann Ekra and Sebastian Dalgaard have exercised the option to be picked up by the Rowdies in 2021. Next season will be Guenzatti’s fourth year with the team, and he is on the path to become the next Rowdies player to hit the 100-game milestone. He currently sits at 89 games with 36 careers goals and 10 assists.

Defender Scarlett will return for his second year with the team after 19 starts, one goal and one assist. Midfielders Ekra and Dalgaard each had 10 starts with five assists combined.

“We look forward to having these talented players back in 2021,” said Lee Cohen, president of the Tampa Bay Rowdies. “They were instrumental in our success this past season, and we are excited to have them on the field to help propel us back to the championship. We are hopeful to see more players from the 2020 season return very soon.”

The Tampa Bay Rowdies roster remains in development and new players will be announced throughout the offseason.