Ryan Davis On His Journey To The Rowdies Broadcast Booth 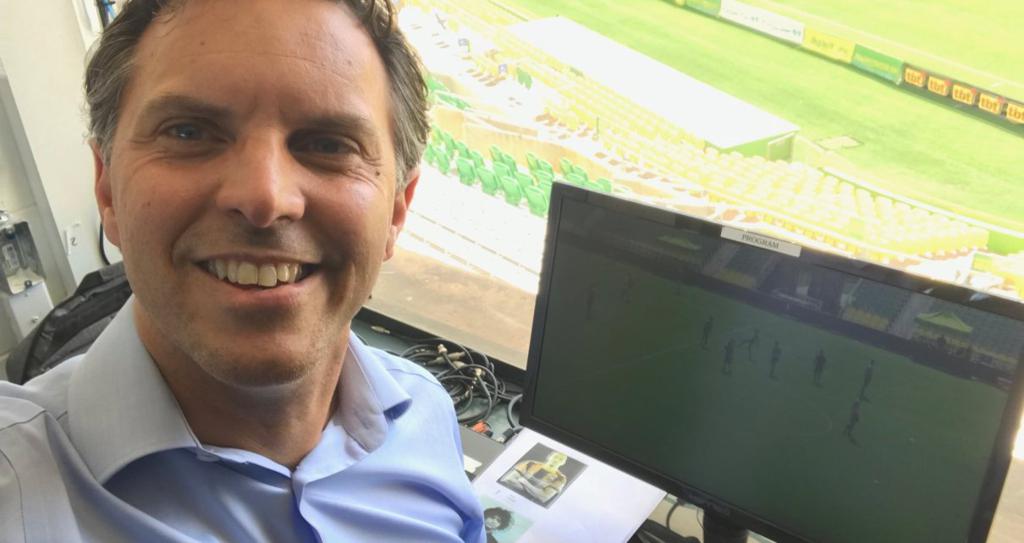 It turns out the Tampa Bay Rowdies aren’t only capable of discovering unknown talents like Juan Tejada to impact the play on the field. They also do it in the commentrary booth.

You’d never know based on the way he handles himself while calling games at Al Lang, but Ryan Davis had extremely limited broadcast experience prior to taking the Rowdies’ color commentator job last year. Davis, 46, called some soccer games for Rollins college and the occassional high school game here and there over the last few years. The Rowdies, though, are his first real foray into professional broadcasting.

“Definitely chasing my dreams later on,” Davis joked. “You know how people build their career and then they start a family and so on? I started my family and I’m building my career now, so I went the opposite way around.”

Unlike most color commentators you’ll come across, Davis never played the sport at a professional level. That doesn’t mean the sport hasn’t been a major part of his life, though. Davis’s father was a professional cricketeer in Trinidad and instilled a love of all sport.

“I absorbed that from him,” Davis says. “I played a ton of soccer growing up. I played cricket. He actually got me into table tennis and I played at a really high level to where I was a junior champion in my country. I played every sport under the sun but always loved soccer. I played it at a high school level and eventually when I came up to the states for college I started to play in the college rec leagues. I kinda lived and breathed the game. If I was not playing the game, I was watching it.”

Davis is also unique in another way. As much as he loved playing the game and idolized the players, he looked up to legendary commentarors like John Motson and and Martin Tyler just as much, if not moreso. Davis’ weekend routine was set as a kid. On Saturdays it was English soccer with Motson on the call. Sundays were all about Tyler broadcasts of Italian soccer.

“I wanted to be them since I was a little boy at 7 or 8,” he says. “I would literally kick the soccer ball against the wall and try to recreate plays and commentate on them at the same time. Even in my bedroom I’d kick the ball and commentate while kicking the ball to score a winning goal of a World Cup final. Even when I was playing cricket, I’d be doing commentary in my head. I was actually going to cricket games, which are  huge in the Caribbean, and in the stands I would be doing commentary by myself or with my friends. It was just something I was always passionate about.”

When it came time for college, Davis’ parents guided him toward a more practical route. He grauated with adegree in marketing from Florida Metropolitan Univeristy (now named Everest University) and landed a job with UK Imports, a company that imports food from the UK. He had a long run at UK Imports, but today his full-time job is with an agency that helps minority-owned and veteran-owned businesses gain access to capital and government contracts.

Those jobs gave Davis financial stability as he built a family in Orlando (Yes, he still lives in Orlando and commutes across I-4 for every Rowdies match. Think about that the next time you complain about your drive to work). Still, the desire to become never waned. Finally around six years ago, as he neared 40, he decided it was time to finally start seriously pursuing the dream.

“What I started to do is talk about it openly with friends, my peers, my family,” he says. “When you start putting it out there, putting it out in the universe as they say, it’s getting real… That’s how I started to get things in motion, by talking about it and taking whatever opportunity that would pop up. If it was somebody new I could meet, a new relationship, or just commentate on a high school basketball game or a soccer game, I would just do it.”

Eventually Davis mentioned his dream to the right friend, one who went to the same gym as former NFL player and ESPN college football broadcaster Rene Ingoglia. Davis had a positive meeting over coffee with Ingoglia, who then gave him the contact info for the Rowdies’ play-by-play commentator Drew Fellios.

“Drew was so generous with his time, Davis recalls. “We talked for like 30 minutes on the phone. I’m just yapping away on the phone like this nervous high school kid and Drew is just this pro listening to me and answering all my questions on how the business works.”

That conversation stuck with Fellios when, many months later, the Rowdies were looking to make a change in the booth, Suddenly Fellios was the one calling out the blue to see if he was willing to come in to produce Art Dryce’s studio for an audition.

“I almost crashed my car that time cause I was driving,” Davis says. “At that point I was so excited I was skipping around like Marry Poppins. I studied every game I could get under the sun. I read every book I had back to front and followed up on the Rowdies, looked at their team and just kind of memorized as much as I could.”

Davis’ audition went well enough for him to get invited to call some matches during last year’s Suncoast Invitational. Fellios was unavailable for Davis’ first two matches but he was there for the third. The live chemistry between the two that was exactly what the Rowdies were hoping to see, so they offered Davis the job on the spot.

Fellios and Davis balance each other well. While Davis has been a lifelong lover of the sport, Fellios came to the sport later in life. In turn, Fellios has helped Davis hone his skills in the booth after working for years as a broadcaster with ESPN in various sports. Two years into working together and the two have established a working partership that feels organic.

“Drew and I, if we weren’t doing a broadcast together we’d be hanging out at a bar having a couple drinks or watching a game together. It’s a relationship that goes beyond the booth. We can hang out and talk about stuff and poke fun at each other, that kind of stuff. It really kind of makes things easier when the red light goes on and the ball kicks off because we take what we do off camera on to the camera. It was really important to have that relationship beyond the commentary booth.”

While many teams across the USL have elected to outsource their broadcasts to crews working remotely from Vista Productions in South Florida, the Rowdies have stuck with having their own full-time commentators. It’s a move that has especially paid off this year, as more fans have needed to rely on the club’s broadcasts on ESPN+ due to the limited capacity at Al Lang during the pandemic.

“The Rowdies make it really easy,” Davis says. “The support of this club is like a true soccer club. A lot of the time, franchises can separate themselves from the fans. A soccer club, where it’s really organized, sticks its hand out to touch the fan. The Rowdies organization does such a good job with that. The support in return is just so amazing. When you come to Al Lang Stadium, which is like a little bit of a fortress, you can feel that buzz. I know for sure the players feel it. I know for sure coach Collins feels it. Lee Cohen just does a great job breeding that down through the club and making it feel like a real soccer club which is a very cherished thing.”

Davis has ambitions to expand his broadcasting career with larger outlets one day. He’s already started doing broadcasts on other USL games with Vista. That doesn’t mean he’ll be giving up his spot in he Rowdies booth anytime soon, though. He and Fellios have a pact to stay in booth at Al Lang for “as long  for as long as they’ll allow us to.”

Why leave the part when you’re having so much fun.

“Boy do we get invested,” he admits. “If the camera ever caught us, say someone gets to the endline and squares the ball across goal, I’m a very animated person. If Drew is in reaching distance, my hand goes across and grabs him by the shirt. As the ball goes across the goalline he’s almost in a neck-lock as he’s trying to do the call.”