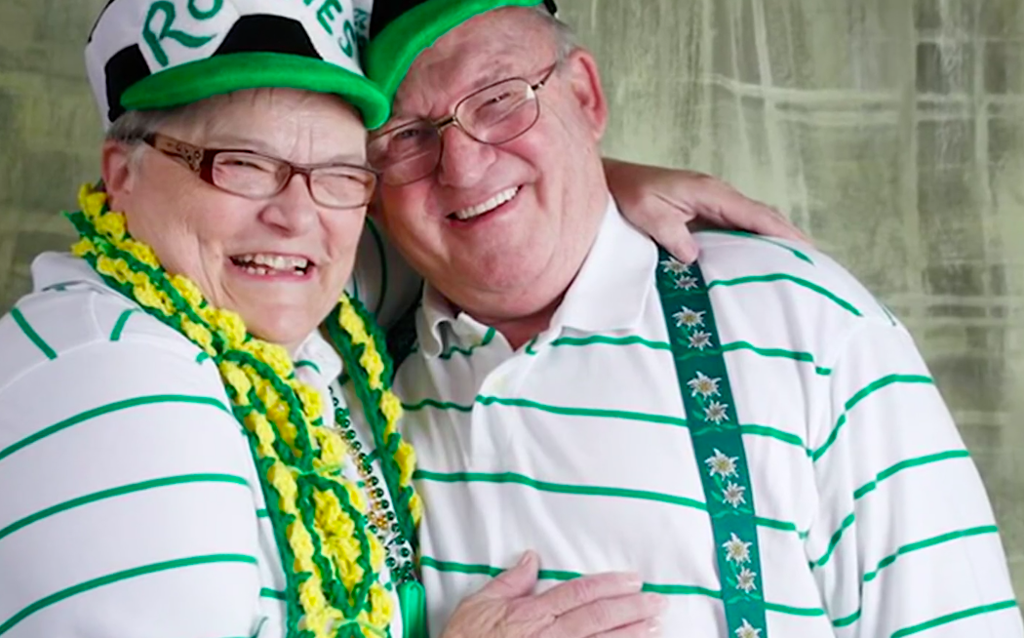 The couple, usually in matching gear, have been sitting (and cheering loudly) in Section 105 for the past eight years.

Eight years in section 105 is a long time, but their devotion to the Rowdies goes back way further than that.

Dieter, who played soccer for the German army, moved to the States and attended his first Rowdies match in 1976.

“He was a life season ticket holder all those years ago - I didn’t know him then,” Mary said.

Little did he know, that’s where he’d find his wife. But it wasn’t love at first sight.

“I saw him at a game, he was sitting about as far away as you are. My girlfriend took me to one game all those years. And I said that guy is going to have a heart attack, look at him screaming at the referee!” Mary recalled.

“I said, that German fellow? He talks too much!” Mary laughed.

And from that moment forward, the pair were inseparable.

Mary grew to be as fanatical about soccer - or football - as Dieter called it.

When the team made its return in 2010, they were one of the first to buy season tickets. They went to every game and got to know the staff and players well.

Mary routinely crocheted scarves for the players. The couple would greet the team at the airport whenever they returned from away games.

After all those years, they were an integral part of the team.

Mary and Dieter were excited to return when the league resumed play on July 11.

But a few days before that could happen, Dieter was involved in a car accident.

He spent 43 days in the hospital - but the complications from the crash finally proved to be too much for Dieter. He passed away on August 18.

Due to Covid-19 precautions, Mary wasn’t allowed to see him very much.

“The 43 days he was in the hospital I might have spent a total of 20 hours with him,” Mary said.  “I was with him til the very end. Til the very last breath.”

Through her tears and grief, Mary returned to Al Lang Stadium just a few days later - the match versus Atlanta United on August 22.

“[Head Coach Neill Collins] stopped the whole team right here at this flag and had all the guys [salute] Dieter and they gave Dieter that dedicated game,” Mary said. “The goalkeeper gave me his jersey and the captain gave me his captain’s armband. And I was just beside myself with everything they had done. I knew that Dieter was here.”

Despite the Covid-19 fan restrictions, the team gave her tickets to come to the rest of the games this season.

“The told me that I was family and that family had other privileges,” she said.

Ryan Helfrick, director of sales and corporate partnerships, has known Mary since 2010 and has been in constant contact with her during this time.

“We consider her family, and when family’s in need and hurting, we wanna be there for them and comfort them so we’ve been there as much as possible for Mary,” he said.

The stadium may be a little emptier now, but there’s no lack of love for the Karnstedts.

“I wouldn’t be making it if they hadn’t shown me all this love,” Mary said.