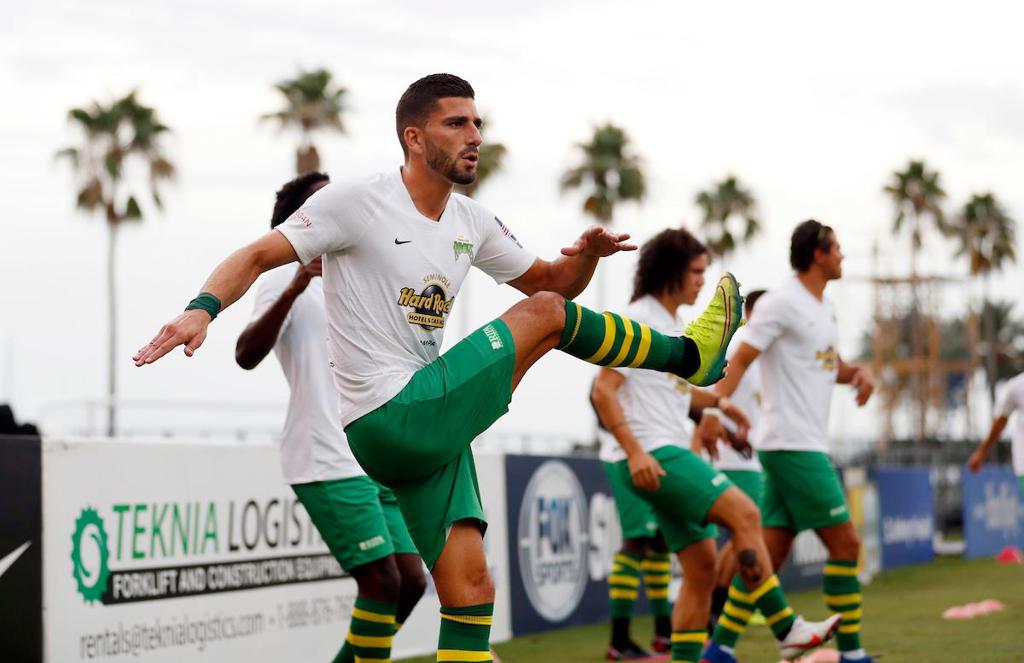 The Tampa Bay Rowdies are facing a familiar opponent tonight in Miami FC, but they’re coming off a first this season — a loss.

On Saturday the Rowdies were shut out for the first time this season and suffered defeat at the hands of Charleston Battery on the road. The loss narrowed Tampa Bay’s lead in Group H and drew Charleston to within one point of the top seed in the group.

Tonight, though, the Rowdies host last-place Miami at 7:30. The game will be aired live on ESPN+. In two games against their fellow Florida foe, Tampa Bay won in dominant fashion and more recently played Miami to a draw.

“We’re learning about these teams all the time as they play,” coach Neill Collins said of Miami on Tuesday. “We know what their attributes are and strengths are. But again, it’s just a big part of our thing is we’re focused on ourselves. So I’m hoping to see the type of energy that we’re used to seeing.”

The Rowdies hadn’t been shut out in 12 games dating back to last season.

Midfielder Jordan Doherty is looking forward to getting back out on the field tonight and put that first loss out of recent memory.

“Obviously we were all disappointed with the result, performance,” he said, “but like I said, there's always that next game.”

Miami and Tampa Bay are both coming off losses to Charleston. On Aug. 26, Charleston handed Miami a 3-1 loss and then defeated the Rowdies 1-0 on Aug. 29.

Though Miami is in last place in Group H, they have been playing much better in the past four games after beginning the season 0-3. Part of that winless stretch to begin the season included a 3-0 loss at home to Tampa Bay on Aug. 7. Since that loss, Miami is 1-1-2 and played the Rowdies to a 1-1 draw at Al Lang on Aug. 16.

“They're looking for a win just as much as we are,” Collins said of Miami. “But I just believe our guys, I know their personalities.”

Collins said now that the first loss is out of their system, the Rowdies are just eager to get back on the field and remedy it.

If they are to bounce back, though, it will have to be without forward Lucky Mksona, who will not be available once again.

“We missed Lucky once again on Saturday evening,” Collins said. “That’s the moment that he's made for, but as long as we can get him back for the end of the year, that would be huge.”

Though the Rowdies were missing Mksona’s goal-scoring capabilities, they announced an addition on the defense that should help the team down the stretch. Defender Alex Davey signed with the club from Hartford Athletic and will join a back line that has helped goalkeeper Evan Louro produce four clean sheets this season.

“Alex I think just goes to the depth,” Collins said of the team’s newest player. “And now we're ready to go in and give our best shot you know the end of the season.”

Tonight’s game is just the latest in a series of quick turnarounds for the Rowdies in the shortened season. Tampa Bay is playing on short rest once again following Saturday’s game and a long trip back home. And there won’t be time for rest after Miami either as the Rowdies draw Philadelphia Union II on Sunday at Al Lang.

“I'm sure the players will want to really take advantage of two back-to-back home games and enjoy playing at home,” Collins said.