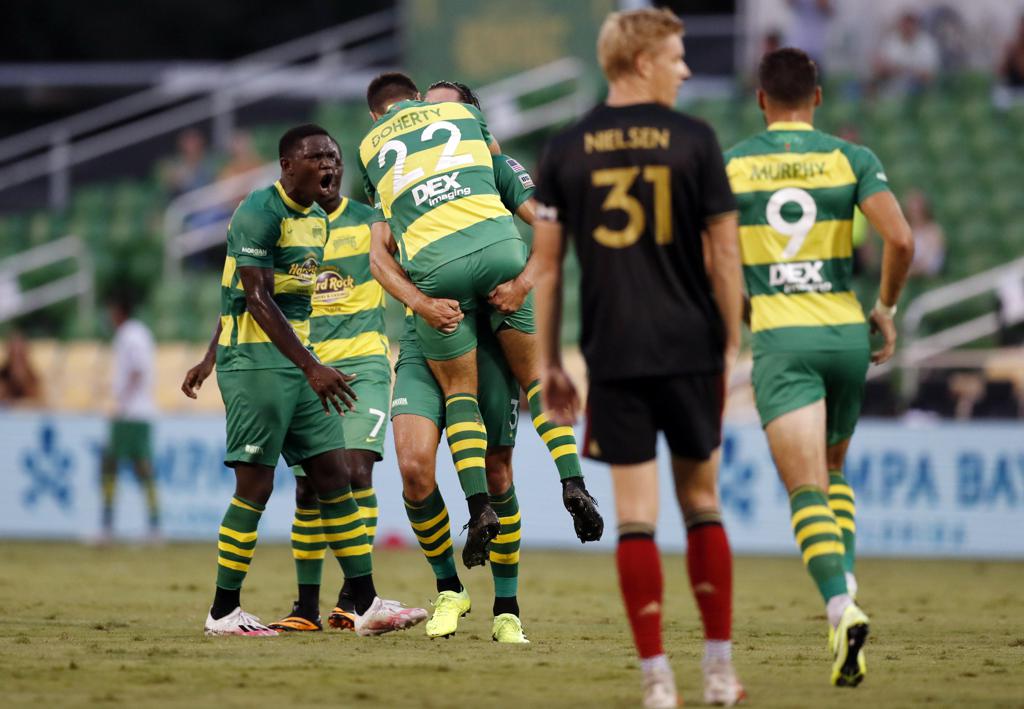 Jordan Doherty and Kyle Murphy score as Tampa Bay closes in on a playoff spot just past the midway point of the season.

ST. PETERSBURG — A pair of Rowdies loudly announced their presence in the goal column in a 2-1 victory over Atlanta United 2 on Saturday night at Al Lang Stadium.

Jordan Doherty and Kyle Murphy unloaded bombs in the first half on Atlanta goalkeeper Ben Lundgaard for their first goals with the Rowdies.

With wind gusting and rain pelting them in the second half, the Rowdies kept up the pressure but could not get a third goal. Outshot 16-3 at one point, Atlanta drew within 2-1 on a 90th-minute penalty kick after the Rowdies’ Sebastian Guenzatti had a penalty kick stopped 20 minutes before.

Tampa Bay (6-0-3, league-high 21 points) went with three strikers as opposed to their normal two, and a pair of them nearly scored early. Guenzatti and Juan Tejada had doorstep chances during an onslaught in which midfielder Malik Johnson toyed with the left side of the Atlanta defense.

“We’re constantly looking at how we can get better,” coach Neill Collins said. “And it’s credit to the team that whatever we ask them to do, tactically (they do well). Tonight I was pleased with all aspects of the performance, and the shape of the team was one of them.”

Doherty, who turns 20 this week, was idling unmarked 25 yards from goal before Yann Ekra spotted him with a pass. Doherty took one touch to set up a 25-yard rip that dipped as it neared the left post, going underneath helpless Lundgaard to make it 1-0 in the 21st minute.

Guenzatti, getting a well-slotted pass from Johnson, blasted the ball off the right post two minutes later, and Johnson again set up Guenzatti just past the half-hour mark for a header that was saved.

The Rowdies had an uninterrupted 15-touch sequence that led to the second goal, but it was all about the strike. A touch by Guenzatti sent Murphy goalward, and knowing a dribble would send him into a defender, Murphy cranked one from just beyond 20 yards that slammed inside the right post.

Collins had seen glimpses of that long-range prowess in practice.

“I would say it epitomized (Murphy’s) performance tonight,” Collins said. “You’ll always get plaudits for a goal, but I actually thought particularly in the first half he was fantastic. Please remember he’s 19 years old. And he’s becoming an integral part of our team.”

Murphy had another try from distance two minutes later, but it went right to Lundgaard, who added to his league-leading save total because of Tampa Bay’s dominance. The Rowdies controlled play in the second half and ended with a 17-7 shot advantage.

Barely past the midpoint of an abbreviated United Soccer League Championship season, the Rowdies have practically sealed a playoff spot as one of the top two teams in Group H. Atlanta (1-7-3, six points), third in the group, would have to win each of its last five games with the Rowdies losing their last seven to catch up. Miami is in fourth place with two points.

Charleston is seven points back in second place with a game in hand.

In the second half, midfielder Leo Fernandes came on for his first action since being injured four games back. The Rowdies were without valuable holding midfielder Dom Oduro, injured late against Miami last Sunday, and they lost substitute striker Lucky Mkosana to injury after 15 minutes.