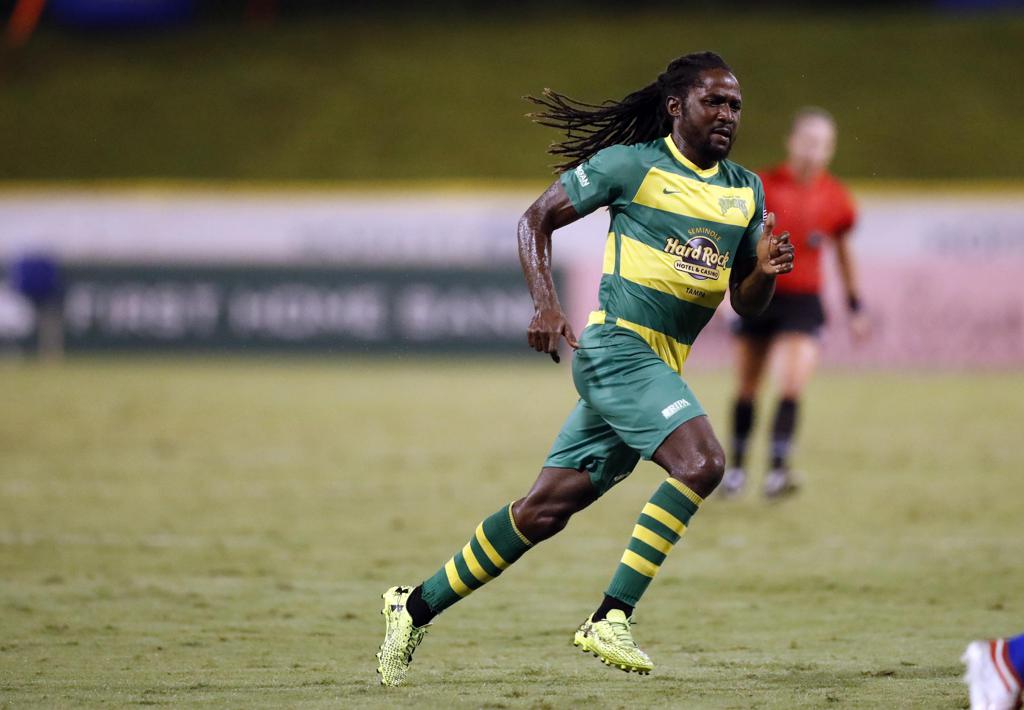 Tampa Bay falls behind early but rallies to maintain its seven-point lead atop the Group H standings in the USL Championship.

Miami left as the more fortunate side after Tampa Bay, still undefeated but a little underwhelmed with the result, had the visitors holding on for their first point of the USL Championship season.

Rowdies coach Neill Collins applauded his team’s overall effort, though a span of three games in nine days might have sapped some of Tampa Bay’s normal zest.

“I think there was a little bit of sluggishness, particularly early on,” Collins said. “We can’t use the game on Wednesday as too much of an excuse, but if anyone travels on a bus for 14 hours (to and from Atlanta), it takes its toll. Half the season complete now, would have been nice to get a win tonight, but it wasn’t to be. If we do improve the next eight games, we’ll be in a good spot.”

Tampa Bay (5-0-3, 18 points) still leads Group H by seven points over Charleston. The top two in each group qualify for the postseason. Atlanta United 2, the Rowdies’ next opponent Saturday, is 13 back in third. Miami, now 0-3-1, is fourth.

Mkosana’s header off a service by Malik Johnson evened the match with a 30 minutes left, but the Rowdies, against a side that was allowing nearly four goals a game, could not find another despite a constant search.

Gammiero, making his first domestic start in a regular-season match, made saves on a pair of Mkosana strikes in a six-minute stoppage time. Additionally, Yann Ekra’s blast sailed a couple of feet over the crossbar, and Adam Najem, in his Tampa Bay debut, blasted a shot inches outside the left post late.

Johnson made several promising runs and finally one produced a goal in the 59th minute. Patiently working the ball outside the Miami third, Juan Tejada delivered a pass into the right corner for Johnson, whose perfectly whipped-in cross was headed into the upper right corner by Mkosana.

“What a goal. What a header that was. That’s a dying art, that goal,” Collins said. “Lucky, he’s been unlucky the past 2-3 games not being (in the lineup), but I knew he’d be ready — he always is. He’s just got a great knack, as all strikers do, an innate sense. So really pleased for him.”

Tampa Bay ended with an 11-4 shot advantage. Miami’s lone dangerous move of the second half came at 74 minutes, surging into the Rowdies third where Marco Franco’s effort sailed over the crossbar.

Tampa Bay was without top scorer Sebastian Guenzatti, and Leo Fernandes missed his second straight after being hurt early more than a week ago in Miami. Collins said it was simply a chance to give Guenzatti a break.

“Sometimes you tell a player you’re giving them a rest and they think it’s a nice way of saying that they’re left out,” Collins said. “Seba’s been like a talisman. He’s the captain. You could think short term and just flog him until he’s out, or you can think long term. We’re blessed with four great strikers.”

Kevin Mendoza received his first start after playing all of four minutes prior; he was replaced at halftime as Collins inserted Mkosana and Ekra.

Miami took the lead inside seven minutes on an expert counterattack. A blocked shot went to Vincent Bezecourt, who quickly sent the ball past midfield to Prince Saydee. With two defenders on him, Saydee rightly one-timed a pass left to Sebastian Velasquez, who cut the ball back twice before rifling a left footer low and to the right past a diving Evan Louro.

A healthy rain helped slow the pace for about 10 minutes before both sides resumed their attacks. Tampa Bay nearly got the equalizer in the 27th minute when Dom Oduro won a tackle and found Mustapha Dumbaya on the right flank. Dumbaya got it to Tejada, who was alone versus Gammiero, but the Miami keeper came up with the stop.

Collins had Johnson on the left wing to start the game but switched him over to the right at the half-hour hydration break, and Johnson menaced Miami for the remainder of the game.