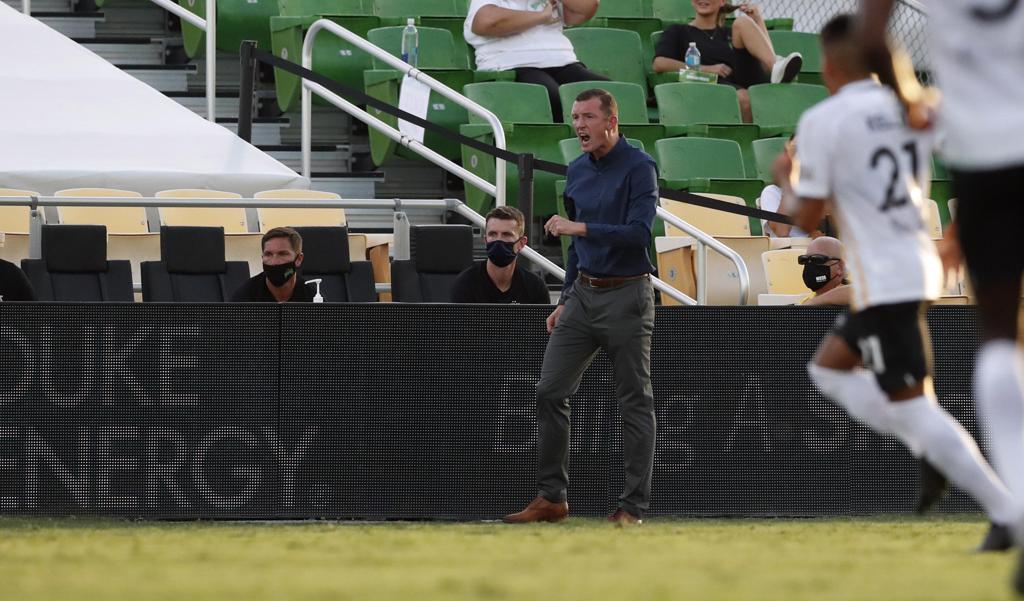 The Tampa Bay Rowdies will play their first of four matches against Miami FC this Friday at Riccardo Silva Stadium.

Miami sits dead last in the Group H standings, having lost its season season opener back in March and its first match of the restart last week at Atlanta United 2.

“I think one of the things we do well is treat every opponent the same,” Rowdies keeper Evan Louro said. “Obviously there’s little things we can exploit if we think the team is weaker in a specific aspect, but we try to focus on ourselves and we don’t worry about other teams. We’re going to play them as if they’re first place in the whole league.”

In this week’s call with the media, Rowdies head coach Neill Collins noted some of the difficulties that may have put Miami at a disadvantage to start out. Even before the pandemic, Miami was a bit behind others in that it was only officially confirmed to join the league in mid-December, just three months before its 4-1 loss to St. Louis FC in Week 1.

“They didn’t have as long as everyone else to prepare for the season,” Collins said. “They came in slightly later. So Paul Dalglish and Nelson Vargas had a hard job getting their squad together last minute. So that first game’s kind of irrelevant. And that first game (of the restart), it’s always difficult when you’re playing catchup when teams have played some games and you’re only on to your first game.”

Miami’s defense has conceded four goals in each match so far, but Collins isn’t taking that kind of defensive showing as a given. Miami came into the year with decent expectations from those who follow the league based on their acquisitions, and Collins is well aware that all that talent still remains on the roster.

“Honestly I’m not reading into their goals against column at all,” he said. “I look at their squad and it’s littered with players that we’ve played in the past. These are very, very good USL players. Guys that have caused problems attacking but they’ve also got good experienced defenders. I think you’ll see a different Miami as the season progresses.”

Did Someone Say Derby?

Friday’s match will be the first competitive meeting between the Rowdies and Miami since 2017. In their last encounter, Miami eliminated the Rowdies from the U.S. Open Cup with a 2-0 result. Collins and midfielder Leo Fernandes were both in the starting lineup for the Rowdies. No other player from that night is still with the Rowdies.

2017 is also the last season when the Rowdies had an in-state rival in their league Orlando City B left the league at the end of that year and now plays in USL League One. As much fun as beating any team with Orlando in their name is, having a non-reserve team like Miami in the mix is decidedly more exciting.

“I think it’s something that soccer in the U.S. kind of misses, just having those close rivalries. Games against your neighbors,” Colliins said. “So it’s great to have them in the league. And in the current climate, from a logistical point of view, it doesn’t do any harm going down to Miami. I’m looking forward to the game.”

The Rowdies and Miami were league rivals once before, during the 2016 NASL season. It was Tampa Bay’s last season in the league and Miami’s first. With so little time to develop, it’s hard to call this a true rivalry yet. That hasn’t stopped supporters from engaging in some fun on social media in hopes that this can blossom into a full-blown rivalry.

“This is my first year with the Rowdies, so I wasn’t part of those games with Orlando City B and all that stuff,” Louro said. “But just from the short time I’ve been here, I’ve seen all the tweets. I’ve seen all the banter between the two fanbases, so it’s definitely good to get that environment of a derby for sure.”

BYOI: Bring Your Own Intensity

Friday’s match will also be the first time the Rowdies play in an empty stadium. Miami will not be allowing any fans into the 20,000-seat venue due to the ongoing pandemic.

Having watched the Rowdies play inside a virtually empty Red Bull Arena in 2018, I can definitely say it’s an unusual environment to be in. Still, Louro maintained it’s all business once the whistle blows.

“I’d much rather play away with no fans than home with no fans. I think for us having whatever number of fans it is at home gives us a little extra juice,” he said. “(No fans) is definitely something to get used to. But I think we’re so focused on what we’re trying to do that after five minutes it just kind of goes out the window. At least from my experience that’s how it’s been and I’m sure our guys are focused. Not having fans cheer against us will probably help us, honestly.”

Collins is confident his players will be up for the match, even without the usual atmosphere that players can get feed off of.

“Once you’re in the game and playing the game, you’ve kinda got to bring your own intensity in these circumstances,” Collins said. “…I think our squad has got a fantastic mentality. They don’t need motivation. They’re gonna bring intensity whether there’s fans in the crowd or not. I’m sure that will be the case on Friday.”

Building Off the Shutout

Last week’s 2-0 victory over the Battery was a positive step in the right direction for the Rowdies as a defensive unit. As the starting keeper, Louro was arguably the happiest to see the Rowdies clean things up after conceding some easy goals in the first three matches of the restart.

“I think it was a big moment for us,” Louro said of shutout. “With this restart there’s gonna be mistakes, there’s gonna be a little rust. It’s gonna happen. But that shows a good team, that we can adapt and we can button things up and figure things out. Clean sheets are great. I love clean sheets, but at the end of the day if the team wins, I don’t care. I’m gonna do my best. All the defenders are gonna do their best to keep the ball out of the net. At the end of the day the goal is to win. If we do that we’re gonna be alright.”

“We’re going to get better and better because of the mentality of the guys, including Max Lachowecki as well, is great,” Collins said. “They’ve come with a great attitude to learn and a great willingness to win. That was a big thing we highlighted with Evan, Jordan Scarlett, Forrest Lasso, Aaron Guillen. Competitors, fierce competitors. All different characters but fierce competitors. They’re only gonna get better. I’m really looking forward to working with them in the future to get them better.”

The Rowdies made an addition to the roster this week with Adam Najem. The creative midfielder is expected to bring a spark to the Rowdies’ attack.

When exactly Najem will appear is still a question, though. Collins emphasized that they don’t want to put too much on the midfielder considering he hasn’t been training with a club for the last four months and only started training with his new teammates on Wednesday.

“The minute you see Adam with a football, you realize he’s got some natural ability and natural talent,” Collins noted. “For me, with Adam it’s about being fair to him. He’s not been training with a team and he’s really not had too many sessions with us yet. I wanna keep my expectations realistic, but he’s here for a reason. He’s here to contribute. He’s here to give us something that we were maybe were just lacking.”

Louro had high praise for the Rowdies’ new addition. The two have never played together in the professional ranks, but the New Jersey natives were longtime teammates as kids in the New York Red Bulls academy.

“Adam’s an unbelievable player. I’ve played with him since I was 13 or 14,” Louro said. “As good of a player as he is, he’s just as good a person. I think he’s gonna fit in super well. The few days he’s been with us already, you can just tell it’s gonna be a seamless transition for him. Just the quality he has as a player, I can’t say enough good things about him.”