Juan Tejada has settled into St. Petersburg in his second season with the Rowdies 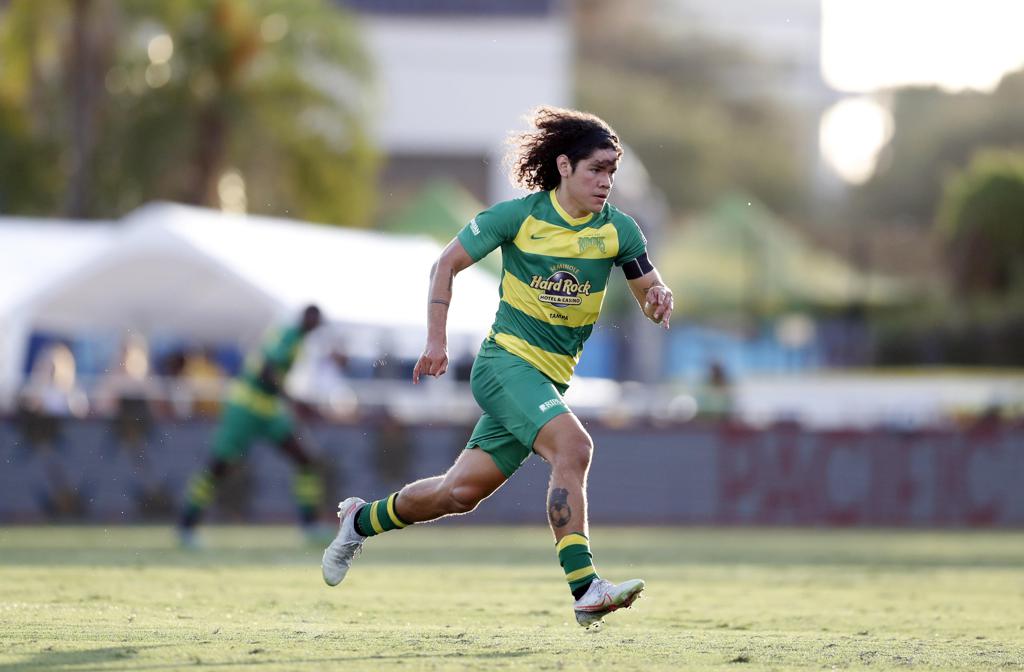 The 22-year-old Panamanian forward played at Eckerd College and IMG Academy before beginning his career with the Rowdies in 2019.

Back in Panama, Juan Tejada is something of a celebrity.

The Rowdies’ second-year forward was called up to Panama’s U23 national team a year ago and scored in his international debut. Tejada said more people have been following his career with the Rowdies since that game, but he wasn’t well known in Panama before that — he left when he was 17 to pursue a professional soccer career in the United States.

That career move saw him do a year at IMG Academy and go on to Eckerd College, where he started all four years and scored goals frequently. Those two stops set him up well with the Rowdies, where he starts at forward alongside Sebastian Guenzatti.

So in just a few years, Tejada has become a sports fixture in St. Petersburg, as well.

“You speak to so many fans and they all love Juan Tejada,” Rowdies head coach Neill Collins said. “How can you not? A guy that plays with the energy and enthusiasm and his attitude to the game, and you can see that when you watch him.”

Watching Tejada means following the short, speedy striker all around the pitch. He makes up for his stature with his impact in the attacking third. Tejada has 10 goals in 35 games. All of those, however, came last year in his first go-around with the Rowdies. He’s been held scoreless in four games this season.

Tejada does have two assists, though, one of which led to an equalizing goal on the road against Birmingham FC a few weeks ago. He’s looking to end that scoreless streak against Miami FC Friday night in a game the Rowdies were expecting to play four months ago, before the coronavirus paused their season.

The Rowdies were about to board a bus for Miami when they got word the season might be suspended. It was — for four months.

The schedule was altered so severely that Miami FC has played just two games, compared to five for the Rowdies, and the first-ever meeting between the clubs is taking place 146 days after originally planned.

A two-week suspension of play is what Tejada predicted at the time. He wouldn’t have won that bet.

“I think we adapted to it,” Tejada said of the season’s prolonged suspension. “We trained hard, and we kept following the individual programs that the club sent us to stay fit and be ready for whenever this season started, because we really didn’t know.”

The soccer-less months relegated Tejada to his St. Petersburg apartment near Eckerd College, where he lives with his girlfriend. He’s a short drive from St. Pete Beach and, in the other direction, not far from Al Lang Stadium.

“Thankfully there was a park around where I live,” Tejada said. “And so I went there every day, spent some time doing my fitness, doing work with a ball.”

Other than that, Tejada spent his quarantine like a normal 22-year-old. He watched movies, got into cooking (curry dishes were his go-to, and he tried to replicate some Panamanian cuisine) and played video games.

The return to play has been positive for Tejada and the Rowdies, who haven’t lost yet this season. He relishes the opportunity to learn how to be a professional from his teammates and coach both on the field and off. Every day, Tejada said, his goal is to become a better footballer. Those around him see that, and he’s clearly on his way.

“Anyone who’s met him and walks with him will tell you he’s just doing everything to give himself an opportunity to be a success here with the Rowdies and have a successful career,” Collins said. “When I say no one thinks higher of him, it’s because I’ve got real high hopes for him.”