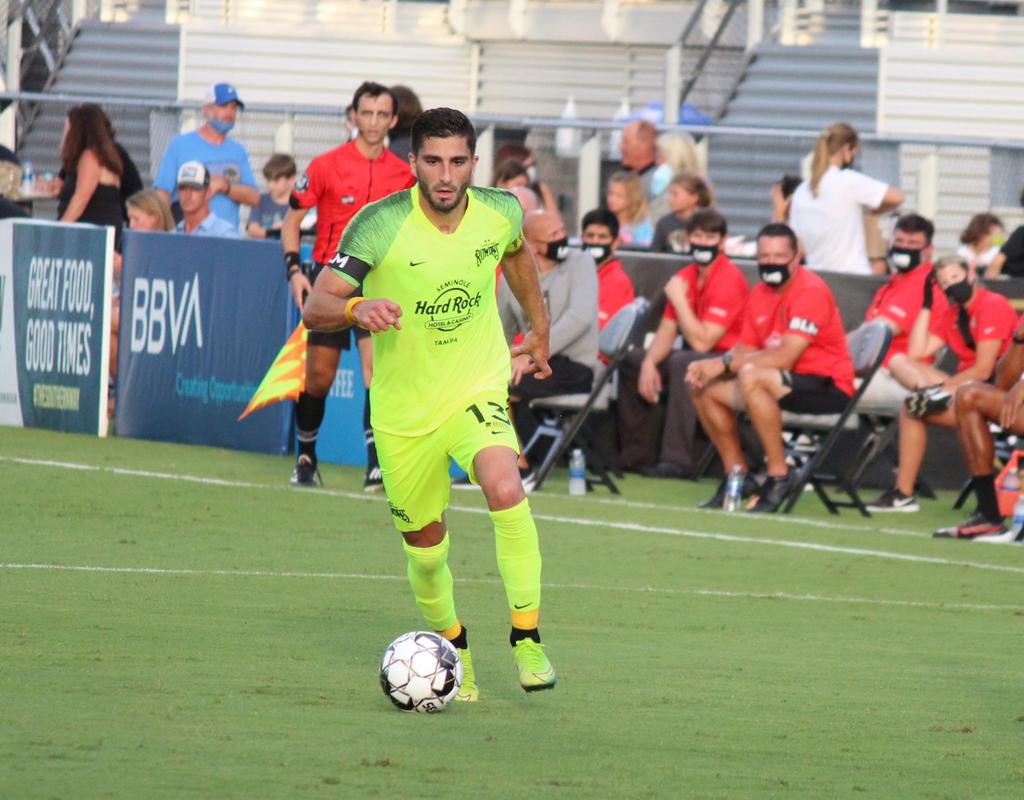 Forward Sebastian Guenzatti scores his second goal of the season in the 51st minute for a 1-1 tie.

The Rowdies didn’t show any signs of fatigue or discomfort from their trip to Birmingham, Ala. Still, they played behind Saturday night after allowing an early goal.

Tampa Bay was able to rally but never take the lead, finishing with a 1-1 draw against Birmingham Legion. The Rowdies (2-0-2) remain undefeated in the United Soccer League Championship season after managing to garner a point from the draw.

“I think we missed an opportunity not winning tonight,” coach Neill Collins said after the game on a Zoom call. “We’ve won a lot of good games like this on the road, but we’ll take a point and try to do better at Al Lang on Friday night (against Charleston at 7:30).”

Birmingham (2-0-1) struck first off a set piece in the 16th minute. Midfielder Bruno Lapa bounced a free kick into the box and defender Alex Crognale snuck a shot in past Rowdies goalkeeper Evan Louro.

The Rowdies had been in that position before, trailing 1-0 in the first 20 minutes to Atlanta United 2 on July 11, their first game of the restarted season, only to pull out a 2-1 victory. That wouldn’t be the case this time.

“The message at halftime was keep doing what we’re doing well, improve a couple of things and the game should be there for us,” Collins said.

The Rowdies ended the first half scoreless but quickly remedied that in the second half. In the 51st minute, forward Sebastian Guenzatti connected on a header in the box from forward Juan Tejada. The equalizer was Guenzatti’s second goal of the season.

That would be it for the scoring between the Eastern Conference opponents. Birmingham midfielder Anderson Asiedu fired a shot into the box in the 88th minute, but Louro punched it out to maintain the draw.

Though the Rowdies allowed the early goal, it was still a season-low scoring output for Birmingham, which had scored five goals in its first two games of the restarted season. The Rowdies also managed to breach a Birmingham defense that had allowed only one goal entering the game.

Rowdies defender Forrest Lasso drew a yellow card in the 13th minute and received a few other warnings from officials in the first half. Collins subbed out his starter and key defensive cog at halftime, adding the team performed well without him in the final 45 minutes.

Both teams remained atop their respective groups with the draw, but the Charleston Battery (6 points) moved closer to the Rowdies (8) in Group H after their win Friday night.

Of the Rowdies’ 12 remaining regular-season games, 11 are against opponents in their group.

“So now everything that we play will be taking points off of other teams in our group, which makes it slightly different,” Collins said. “Normally, you’re playing a team where we’re always taking points off the team in your table.

“So now, I don’t mean they become more important, but it becomes a bigger swing. And I’m looking forward to it.”