Rowdies Rally For A Point In Birmingham 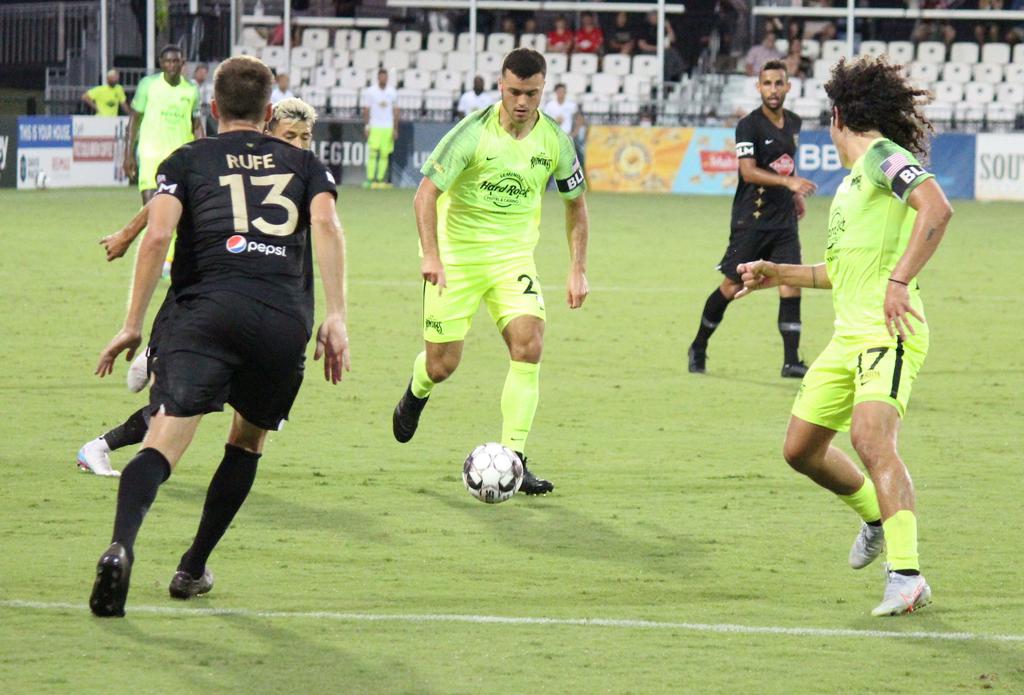 The Tampa Bay Rowdies recovered from an poor concession early on Saturday night to grab a point off Birmingham Legion FC thanks to a nifty combination from Juan Tejada and Sebastian Guenzatti in the second half.

It’s the second time the Rowdies have mounted a combeback since the restart. Two weeks ago they manged to take the full points with a rally against Atlanta at home. Now they take a valuable point on the bus back home to Tampa Bay.

“It’s a great trait to have.” Rowdies head coach Neill Collins said. “Any team’s that’s gonna be successful is gonna have to be able to come from behind. I hope we don’t have to do it too often but I’m pleased that we’ve done that and shown the resilience in two of our three games since the restart.”

Collins was not as pleased with his side 16 minutes into the match when they allowed another easy goal for the third week in a row. From the left wing, Birmingham’s Bruno Lapa played a free kick that should have easily been cleared from danger had anyone picked up Alex Crognale on his run into the box. Instead the center back was free to run in and flick an uncontested shot into the bottom right corner.

Birmingham earned another opportunity shortly after the go-ahead goal as Brian Wright snuck behind the back line and had a free run at goal. Keeper Evan Louro was snuffed out the chance well, though, coming off his line to deny a shot near the penalty spot.

The Rowdies dominated possession throughout the first half even after going down early, but failed to convert the advantage into any true threats on net.

“I was furious with the goal,” Collins said. “When we look back at that we’ll be very disappointed with it. It’s hard enough coming to a place like Birmingham with the talent they’ve got to give up a set piece goal. But it happens. I actually felt other than that we’d done a lot of good things… The message at halftime was keep doing what we’re doing well, improve a couple of thing and the game should be there for us.”

Collins was proven right six minutes in the second half. With defender Boluwatife Akinyode at his back, Tejada received a ball inside the box and quickly turned toward the endline to shake off the defender. Tejada then placed a deft cross across goal for Guenzatti, who cleanly headed the ball into the back of the net.

“I don’t know if there’s anyone that thinks higher of Juan Tejada than myself. I think he’s a potential huge player,” Collins remarked. “We’ve got four great strikers. We decided it was good one for Juan tonight and he took the chance. He caused them havoc all night. He works hard, he’s a real team guy, but he’s also got those moments of magic. I was pleased for him. He’s definitely a guy that the guys like to play with because they know the work rate’s always gonna be there. It’s the energy he brings along with the work rate that unsettles people. Him and Seba have got a great relationship.”

The Rowdies were also forced into a substitution at halftime they weren’t expecting to make. After picking up a yellow 13 minutes into the match, defender Forrest Lasso then got off with a warning on two more fouls in the half. Collins was not taking any chances of going down a man and decided to swap Lasso out for Max Lachowecki during the break.

“Unfortunately with Forrest, and I suffered from this myself, he’s very strong, very dominant and the other players kind of targeted him,” Collins said. “I don’t think the referee was strong with it so I had to take him off to stop us from going down to 10 men.”

Aaron Guillen shifted into Lasso’s central defensive position while Lachowecki took over on the left side. It did not appear that the change had any negative impact on the Rowdies defensively as the hosts failed to fire another shot on target the rest of the night.

“They did really well,” Collins said of his players’ defensive effort. “Obviously we lose a leader in some respect, but we get a different kind of player with Max, who I thought carried the ball out well for us. By the way, that’s not easy. It’s not easy coming on for your first real minutes. He’s been a sub, but 45 minutes when you’ve not had that action is a tough thing. Max is a player that’s a real locker room guy that the guys like. So that’s good. It was good for the team to see these guys come in and contribute.”

The Rowdies had the only other clear cut chances of the second half. In the 71st minute midfielder Lewis Hilton had a well-placed effort from well outside the box pushed out by a diving Matt Van Oekel. Then, four minutes after entering in the 82nd minute, forward Kyle Muprhy narrowly missed on a header that would have likely been a winner it been a foot in the other direction.

With the result the Rowdies have taken 5 points from three matches against teams from outside of their group. It’s a decent position to be in, but it’s likely that the next stretch of matches will be critical to whether the Rowdies earn a postseason berth as one of the top two teams in Group H. 11 of their 12 remaining matches are against fellow Group H teams. They sit first in the group with 8 points at the end of the weekend, with second-place Charleston Battery sitting on 6 points. Atlanta is in third with just a single point and Miami is last without any points having yet to resume play yet.

With so much head-to-head action coming up in the next two months, big swings in the standings are a strong possibility.

“Now it gets interesting because we’ve played three out of (group) games,” Collins said. “So now everything that we play is taking points off of our group, which makes it slightly different… I’m looking forward to it. It’s going to be interesting playing these teams regularly. I’m just really focused on getting this group better. It might take a little longer than we’d ike but once we get there I’m excited.”

The Rowdies host Charleston at Al Lang on Friday night.