Despite playing to a draw Friday night, the Rowdies did not lose any ground in Group H. 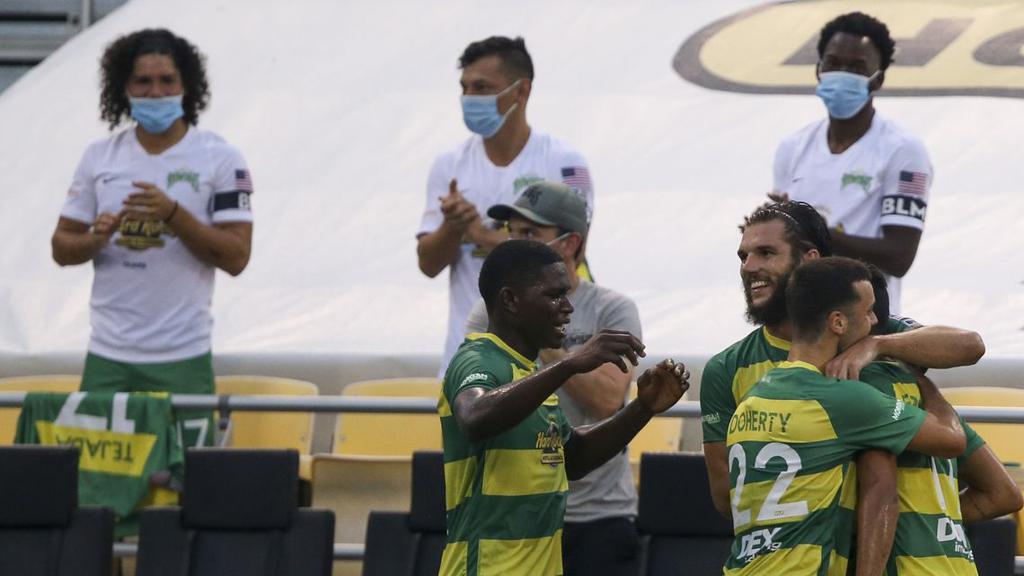 Manager Neill Collins was not pleased after watching his Rowdies squander a two-goal lead on Friday night. Tampa Bay missed out on two points that were well within reach by playing to a draw at home against North Carolina FC.

The Rowdies hold a 2-0-1 record, identical to their record through three games in 2019. The difference this year is that completing three games means the season is nearly a quarter of the way finished in the shortened 16-game season. In the 34-game slate Tampa Bay played last year, there was more room for error and time to recover from a particularly bad stretch.

So it’s understandable why Collins was disappointed to see points left out on the field. But the Rowdies are actually in the best position of any team in the USL Championship when it comes to their group standings.

Tampa Bay holds a four-point lead in Group H, meaning they lead by more than a game. That gap is the greatest between first- and second-place teams in any group.

The Rowdies sit atop Group H with seven points. Charleston Battery is second with three, and Atlanta United 2 has one. Miami FC, which has played just one game and has not yet restarted its season, is pointless.

The six points separating Tampa Bay from third-place Atlanta United 2 (and a non-playoff spot) are tied with Indy Eleven for the largest gap in the league between a first- and third-place team.

In the USL Championship’s revised playoff format, each group sends its top two teams to the playoffs.

FiveThirtyEight currently gives the Rowdies an 89-percent chance to make the playoffs, third-highest in the league. Tampa Bay’s seven points are tied for second-most, with Phoenix Rising FC and San Diego Loyal. Only Indy Eleven has more points (nine) after a perfect start to the season.

The Rowdies’ draw on Friday could have hurt the team more than it did if it weren’t for their group rivals failing to come away with wins this past weekend as well. On Saturday, Atlanta United 2 ended in a draw with Memphis 901 FC. The following day, Charleston Battery lost to Birmingham Legion FC. So, despite missing out on two points on Friday, Tampa Bay didn’t give up any ground in Group H.

The draw with North Carolina FC caused a slight drop in the USL Championship’s power rankings from No. 3 to No. 4.

Collins said that power rankings are irrelevant to him. He naturally cares more about group standings and ignores the rankings and statistics that say how good his team is when there are points and a record that say just that and carry more weight.

The Rowdies are well off in both metrics. And their position through three games sets them up well for a second-straight run to the USL Championship postseason.