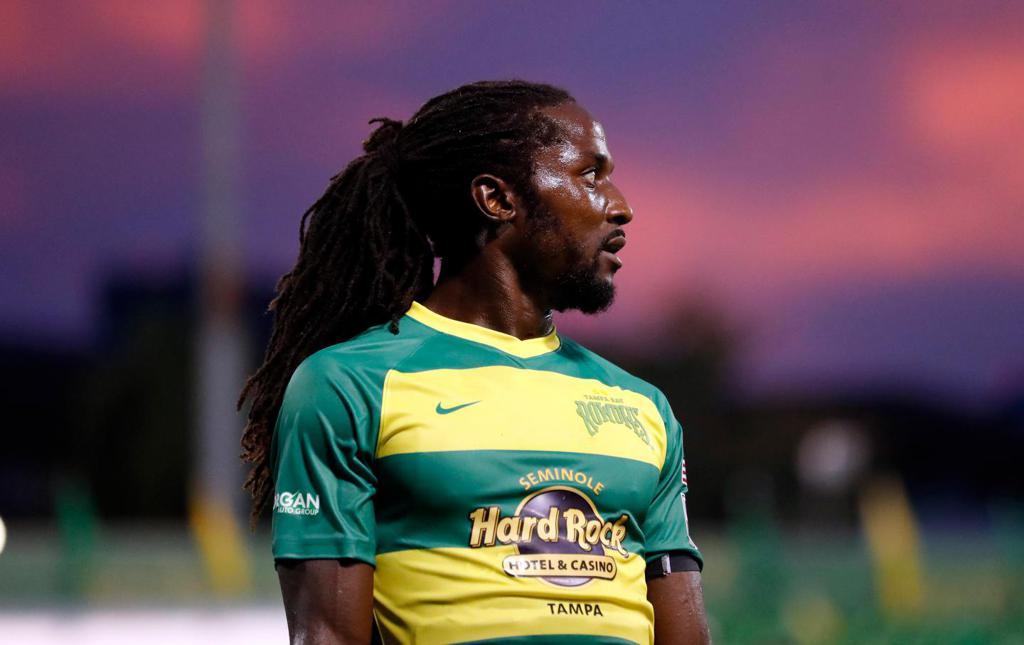 Given the Coronavirus pandemic, times are tough. The difficulties everyone are facing have shown us in the grand scheme of things that soccer is just not that important.

Coming to such an abrupt realization like that can hurt many within the industry, whether they’re a player, a coach, a physio or even a snot-nosed, young sports writer trying to make a name for themselves. While some have had difficulties finding other reservoirs to tap into in order to stay busy and feel productive, Tampa Bay Rowdies forward Lucky Mkosana has felt no such pain.

The Zimbabwean, who is enjoying his second stint with the Green and Gold and just managed an impressive equalizer against Atlanta United 2 last week is also responsible for an incredible foundation in his homeland called “Bridging Youth through Soccer”, or the BYS academy.

Along with his physically demanding career as a professional athlete, Lucky puts everything into his amazing cause. New York Cosmos’ COO, Erik Stover was kind enough to connect Lucky and myself, as the Cosmos have been a longime supporter of the forward’s efforts. Lucky was excited at the prospect of some much deserved light being shone upon his academy.

After spending the 2014 season with the Rowdies, Lucky departed for the Cosmos, where he played for the next three year (along with a bried stint in FInland). Lucky had many kind words and praise for his friend Stover and the Cosmos as a whole.

“The reason I thought about pitching the idea for (an interview) to Erik is because the Cosmos community and the club have helped me and the BYS Academy, and continue to do so today, and for that I’m forever grateful,” he said. “The opportunities and the people I met during my time in New York are some of my best times of my career.”

In spite of Lucky being away from New York and back in sunny St. Pete, Erik still passionately supports BYS academy, which needs help from everywhere possible. When Lucky and I sat down on for a phone interview he was sure to describe his foundation in great detail so myself and the people in which I pass the message onto are fully aware of what the end game is. After exchanging pleasantries and briefly discussing how hot it is in Florida, we got right into the nitty gritty.

“It was 2017 and I was still playing for the Cosmos,” Lucky said of the origins of the academy. “(The Cosmos) helped me out with some donations. It was and always has been a platform to try to help (Zimbabwean soccer players have a platform to maybe try to get into US soccer and still get an education.”

As a Dartmouth graduate, Lucky finds a child’s education to be just as important as them being the best athlete they can be. Lucky wants to change the culture with the BYS academy in Zimbabwe because it is either “school OR soccer” for children in the country. Doing both has just never been an option.

Zimbabwe is suffering majorly from the ongoing pandemic, according to Lucky. So playing soccer is just not an option as the country is in full lockdown.

“Obviously everything is hard right now because the pandemic has everything shut down and the country is on full lockdown. Most people there are self-employed so that makes everything hard,” he said. “They can’t do their jobs because it is obviously bad to sit outside right now. I have my degree in sports management, so I’ve been using some of that education to help the kids with the mental side of the game.”

Lucky is just as intrigued by the mental side of the game for kids as he is with the physical side, maybe even moreso. He speaks with an even brighter spark of enthusiasm when he talking about his zoom calls with the children to boost their mental strength.

“The goal with zoom conversations is to help young players asmuch I can during this tough time. Most of them aspire to play professionally one day but with the global pandemic, there’s obviously uncertainty amongst a lot of young players’ dreams. By focusing on the mental side of the game and how to skillfully regulate and adapt to change, it’ll help them grow and realize that good things in life are worth fighting for and we can only learn and grow from change. Implementing core values that they’ll use everyday to better themselves mentally off of the field will also play a big role in keeping them focused and motivated.”

Lucky is leading the charge for more Zimbabwean kids to burst onto the soccer scene and sees American soccer as an avenue for the children of his native country to gain an entry into the professional level.

“The main goal, above all, is to get kids scholarships,” he stressed.

Getting kids in Zimbabwe noticed has been incredibly difficult in the past, which is why Lucky is so determined about helping gets get scholarships in America.

“I’m trying to bring more scouts to the country. Right now, kids post videos of themselves on things like Facebook to try to get noticed. It is all about trying to get the opportunity to be seen so you can display what you’re capable of.”

Being seen is massive for the kids of Zimbabwe. Like all soccer loving children, they dream of being the next star in the sport. Unfortunately, given the aforementioned lack of scouts, it is more difficult for a kid in Zimbabwe than it is for a kid in SouthWest Florida, for example.  The BYS academy is aiming to help the underprivileged youth get the chance which they deserve to be the best they can be.

Though Lucky is leading the charge and has the personality and presence required to do so, even he can’t achieve the end game and main ambition of his academy alone. The BYS academy can use all of the help they can get.

Though funds are important, Lucky does not let the prospect of donations steer him off track from talking about his desire to help the children. He is determined to help children in whichever way he can, so after a very brief touch onto the subject of donations, he quickly diverted the discussion back towards the children.

“If you think there is a kid who can benefit from the cause feel free to attach them to one of our zoom calls. We do chats about improving confidence and just recently I had a whole session just about scoring goals. We talked about the mental side and also because of this when they play, they have an idea of what to do. Right now, they can’t really go outside because of the pandemic, but when they do they’ll have a pure idea in mind.”

If one is intrigued by the proposition of helping Lucky to complete his mission they can do so in a number of ways.

Firstly, the academy’s website bysacademy.com is a great direct resource for information and to make a donation. You can also reach out to  Lucky’s instagram to speak directly with him about the program. Parents who think their kids can benefit from the cause can book a conversation over Zoom as well.

Lucky is the main bridge of communication for his altruistic project. Any donations or boosting would be incredibly helpful for his cause. The Cosmos are already fully behind the cause. Anything they can do, the Rowdies family can do just as well.

I would like to thank Lucky for sitting down to chat with me about his amazing endeavour. The humble, Zimbabwean forward deserves all the help he can get. So come on Rowdies, make some noise that can change the world.

Daniel Finton is a soccer journalist straight out of Sarasota. Bad at sports, average at writing about them.