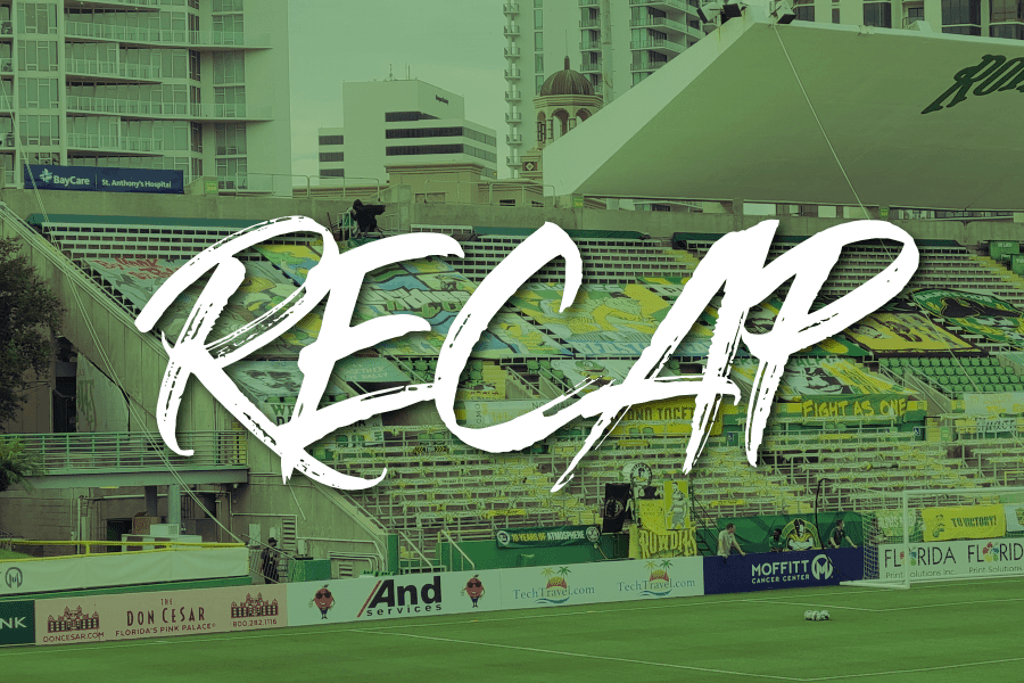 St. Petersburg, FL — In a season that hasn’t gone to anyone’s plans, why would this game be any different? Months of plans went out the window when Neill Collins found his Tampa Bay Rowdies up by a man but down by a goal before they were even halfway to the first half hydration break.

It all began in the 7th minute when Atlanta’s Amir Bashi received a straight red card for a foul on Lewis Hilton. Hilton’s subsequent free kick, into the Mob End, did not find the target, and minutes later the Rowdies would rue the missed chance when Atlanta’s Jackson Conway found the back of the net, from distance, over Evan Louro‘s hand. It was the only shot on target for Atlanta all night.

Whether the up-a-goal/down-a-man combo influenced Atlanta’s tactics is unknown, but the Rowdies spent the rest of the first half on Atlanta’s side of the halfway line, trying to unlock a compact defense that held it’s shape very well, frustrating the Rowdies attempts to equalize. Tampa Bay had several good opportunities to level the match before the first half, but shots from Juan Tejada, Sebastian Guenzatti and Dom Oduro and two Jordan Scarlett headers in first half stoppage times failed to get over the line and the Rowdies went into the locker room at halftime down, but not out.

“We were feeling confident,” said Leo Fernandes, when asked about the mood in the locker room at halftime. “We knew we just had to stay patient. It’s hard to play here – very hot, very humid and being down a man, we knew they would get tired and we would get our chances, and we did.”

Those chances came after the Rowdies started the second half with some personnel changes. Lucky Mkosana replaced Yann Ekra and Dom Oduro was withdrawn in favor of Jordan Doherty. Post-game, Collins said that the two players were replaced after picking up knocks in the first half & their current status is unknown. Following the substitutions, the Rowdies shifted their formation and gradually grew into the game.

Now attacking the Mahaffey End, Doherty picked up a yellow card in the 52nd minute, with Lucky going close with a shot moments later. 10 minutes later, the game was level again after Tejada hustled after the ball and passed it to Mkosana who directed it past Atlanta’s Ben Lundgaard for his first goal of the season.

Tejada was replaced by Kyle Murphy after the goal and the re-energized Rowdies pushed for a second goal, with several chances being blocked or saved. Mustupha Dumbuya made way for Sebastian Dalgaard in the 77th minute and the 140 fans and players family members invited to attend the game likely started to think that this would end with both teams splitting the points, but in the 87th minute, a Lewis Hilton set piece led to a scramble in front of the Atlanta goal and Fernandes poked the ball home, his second on the season.

Looking to maintain the lead, Max Lachowecki was brought on, replacing Leo, and the Rowdies played out the 6 minutes of second-half stoppage, securing the 2-1 win and staking their claim to the top spot in Group H while cementing Atlanta’s spot in the basement.

“Atlanta got down to ten men and perhaps that gave us a little bit of complacency,” said Collins after the match. “But again, credit to the players in the second half, they really put in a dominant performance and managed to win the game. Atlanta should take a lot of plaudits out of the game, they’re a young team and performed in game that people probably expected us to win.”

Dominant, indeed. Tampa Bay finished with 69% of possession, won 60.5% of the aerial duels, and both their overall passing accuracy (88.3%) and accuracy in the opponent’s half (81.6%) were well higher than Atlanta. They will want to get more shots on target, with just 5 of their 22 forcing Lundgaard to try and make a save. The Rowdies will look to win and continue to improve on Friday, July 17th, at home vs. North Carolina FC.