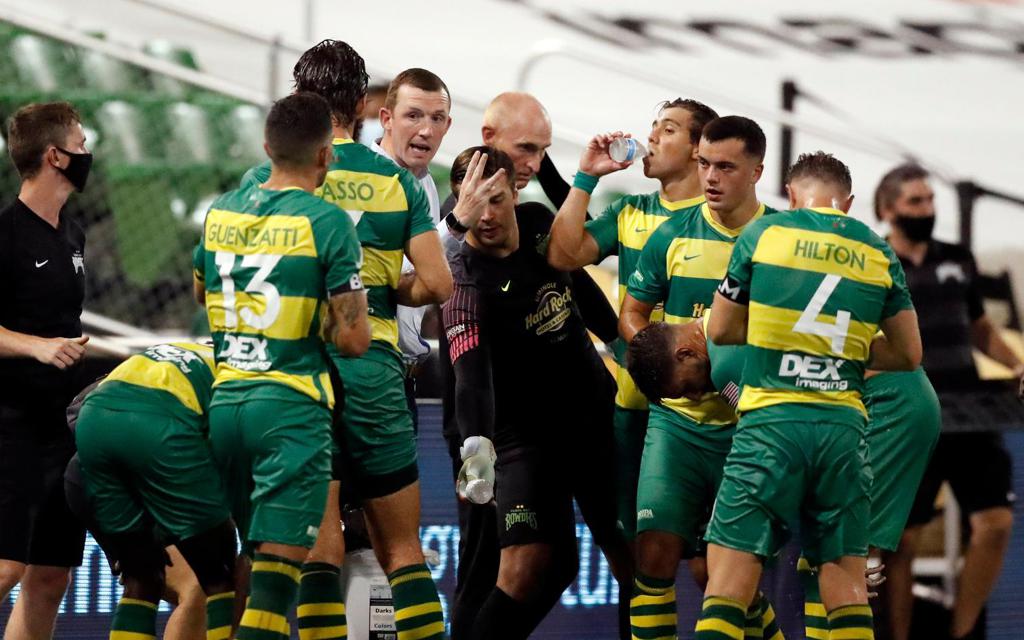 We had to wait a whole lot longer than anyone thought, but the 2020 home debut of the Tampa Bay Rowdies is now fast approaching. The Rowdies will host fellow Group H member Atlanta United 2 at Al Lang on Saturday, the first of their 15-match schedule for the reformatted USL Championship season.

The new-look season will really consist of 16 matches, but the Rowdies are only playing 15 as all games played prior to the COVID-19 shutdown still count toward the standings. So, thankfully, the Rowdies get to keep the 3 points from their first-ever win against a New York-based team away from home.

Since it’s been several months since that 1-0 victory over New York Red Bulls II and most you reading this couldn’t be at the match, I thought I’d offer my perspective as one of the few who has seen this Rowdies squad play a competitive match in person.

Seven offseason acquisitions made it into Neill Collins’ opening day roster, but it was Leo Fernandes, one of the longest tenured Rowdies, who ended up on the scoresheet. After a scoreless 55 minutes, Fernandes broke through with a nice combination of passes with midfielder Zach Steinberger inside New York’s box.

While Fernandes and Steinberger were resonspible for the deciding goal, all the newcomers to the Rowdies impressed in their own ways. This was most apparent in the back, where the Rowdies started a new keeper and three new defenders in front of him. Forrest Lasso, Jordan Scarlett and Aarón Guillén looked more than comfortable working together on Collins’ preferred three-man back line. This is despite the fact that Scarlett missed most of the preseason with an injury. Norwich City loanee Louis Lomas earned most of the preseason minutes with Lasso and Guillén. Now that Lomas won’t be returning due to the pandemic, it’ll be critical that the trio who limited NYRBII to just two shots on target maintain the bar set back then as defensive is a key question moving ahead.

Evan Louro calmly handled everything New York threw at him, including a point-blank header to deny New York an equalizer. What stood out just as much, though, was his distribution skills. Multiple attacks that afternoon were sparked thanks to his quick and accurate distribution up the field. Many keepers have struggled with consistently launcing attacks with accuracy thanks to the conditions along the waterfront at Al Lang. Here’s to hoping Louro can pick right back up where left off in March. Backing him up are Macklin Robinson and Ian McCgrane.

The midfield saw the most carryover from 2019, with seven of last year’s group coming back. To boost the midfield the Rowdies added winger Sebastian Dalgaard (injured for the opener but since recovered), central midfielder Lewis Hilton, and attacking midfileder Kevin Mendoza. Hilton is the only one who played against New York, and he put in a solid shift. It didn’t translate to the game, but Hilton showed exceptional skill at dead ball oppotunities in warmups and the Rowdies are hopeful he can make them much more dangerous in this area.

Another important note about Hilton and everyone who played in the midfield is the work rate they displayed. Every single player looked willing to put forth the effort on both sides of the ball that Collins demands from his players to keep opponents under pressure. New York had to fight for every inch on their home turf.

Returning winger Malik Johnson missed the opener thanks to an ankle injury. He’s since recovered (as has another returning midfielder, Yann Ekra), but he has some stiff competition for the starting right wingback position after Mustapha Dumbuya’s showing at New York. Despite being just one of two Rowdies north of 30, Dumbuya looked as formidabble as any of the youngsters he may go up against. Dumbuya is listed as a defender on the roster and played as a right back at Phonenix Rising last year, but the expectatio is for him to compete for minutes on the right wing.

Alongside longtime Rowdie Sebastian Guenzatti, Collins gave the other starting spot up top to Kyle Murphy. At 6’1, Murphy brings an imposing presence that the Rowdies have lacked in the attack for a while. His day in New York started out promising but an injury forced him out after only 30 minutes. Fingers crossed he doesn’t miss a beat after the restart. Last year’s rookie sensation Juan Tejada replaced Murphy and did well to terrorize New York’s back line even though he had just rejoined his team the night prior after time away with Panama’s national team. Lucky Mkosana (the only other player over 30) gave an injection of energy to close out the match as a stoppage time substitite. Altogether, Tampa Bay’s four forwards tallied 52 goals last season. Given the abbreviated season, it’d be unrealistic to expect that kind of number from the group. Anything close to that kind of productivity would be more than welcome, though.

The Rowdies are restarting the season with just 21 senior players on the roster. USL Academy contract signings Obafemi Awodesu (Defender), Hayden Morgan(Midfielder), Julio Plata (Midfielder) and Landon Ameres (Forward) are all technically eligible for selection. But Collins intimated recently that we shouldn’t expect much from them given their circumstances as they prepare to enter college or prioritize training with their youth teams.

21 players would be considered small roster for any season, let alone one you’re resuming after a three-month hiatus in which you were only able to resume full contact training for a couple weeks. The Rowdies may be able to add a player down the road, though no one should be counting on that in this environment. They’ll likely need to rely on the versatility of those on the roster, like Jordan Doherty or Max Lachowecki. The kind of guy that plug into several positions in a pinch.

Injuries are bound to happen. In the current landscape, no one should be surprised if a player tests positive for COVID-19, even with the most stringent possible protocols being followed. The situation will certainly evolve in the coming weeks as players start to travel to play. To call this restart an interesting experiment would be a massive understatement.