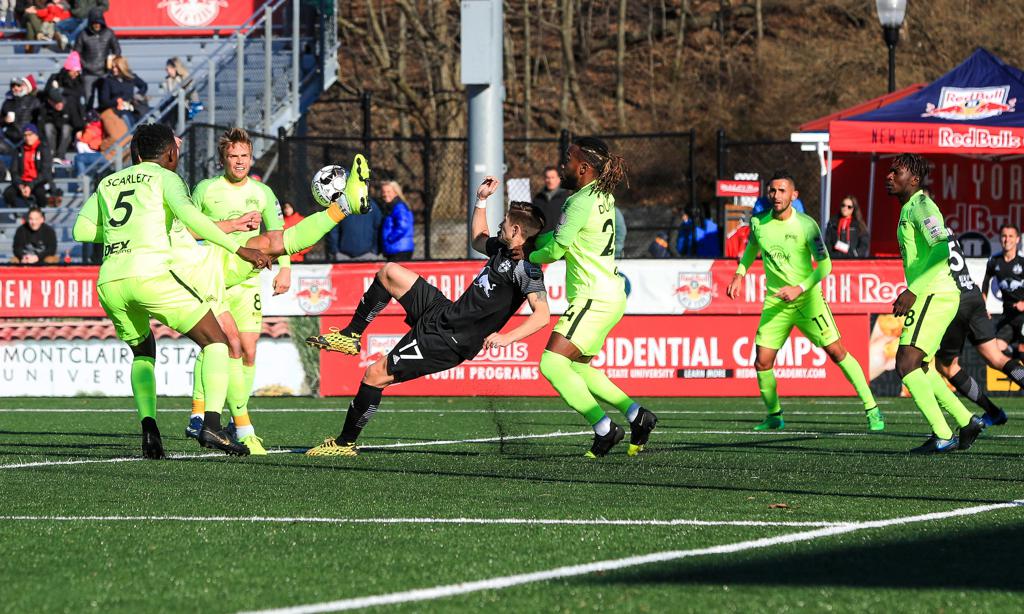 ST. PETERSBURG, Fla. (March 9, 2019) – The Tampa Bay Rowdies started off the 2020 season with a bang Saturday, picking up their first-ever result on the road against New York Red Bulls II thanks to Leo Fernandes’ second-half goal in a 1-0 win.

Something had to give Saturday. As noted before kickoff by USL HQ’s Nicholas Murray, the Rowdies had won all three of their season openers since joining the USL Championship in the 2017 season, but they had also never earned even a single point on the road against the Red Bulls.

In 2017, the Rowdies beat Orlando City B 1-0 on opening day, but lost 4-2 in New Jersey in September. In 2018, Tampa Bay started the year with a 3-1 road win over North Carolina FC but was thumped 5-0 at Red Bull Arena less than a month later. Last year, the Rowdies won 1-0 in Memphis on opening day, but fell to a 2-0 road defeat to the Red Bulls in July.

The @TampaBayRowdies have won all three of their prior season openers in the @USLChampionship, including the last two on the road.

But they've never taken a point away at @NYRBII, where they visit this afternoon.

Seven new Rowdies made their official club debuts Saturday when they were named to Neill Collins’ starting lineup. Evan Louro, Jordan Scarlett, Forrest Lasso, Aaron Guillen, Lewis Hilton, Mustapha Dumbuya and Kyle Murphy all looked like regulars in a strong performance in their first competitive match with the Rowdies.

Murphy was forced out of the match with a groin injury after just 30 minutes, but everyone else went the full 90 minutes. Special credit is due to Louro and Scarlett, who both played very well given that they were making their Rowdies debut against their former clubs.

“I've got to give a special mention to Evan and Jordan for going back to their old cub and playing so well so quickly," Collins said. "That can be tough but they handled it fantastically well today."

The Rowdies have a handful of ties to the New York City area and had plenty of support at the stadium.

No fewer than five current members of the Rowdies were raised in the New York area with Evan Louro, Jordan Scarlett, Kyle Murphy, Sebastian Guenzatti and Leo Fernandes all spending large portions of their life nearby. Additionally, Lucky Mkosana previously played for the New York Cosmos and Macklin Robinson was born in Cooperstown, New York.

For all those reasons, the Rowdies may have felt right at home during Saturday’s match, though not all their fans were actually inside the stadium. A large cheering section of Fernandes’ friends and family opted to stay on the roof of a parking garage and watch the match from above.

Well, that’s a first. So many fans out here supporting the Rowdies. Felt like a home game at certain points. Team lined up to thank fans who came out to support. pic.twitter.com/XjPDm8XSxi

BIG shoutout to the @Leo_Fernandes22 fan club on the roof of a parking garage next to the stadium! pic.twitter.com/R9L2Qwc5Q8

So much focus this preseason has been given to Tampa Bay's rebuilt backline and goalkeeping corps this offseason, given that none of this year's defenders, nor starting goalkeeper Evan Louro, played for the Rowdies last season.

When the 2020 schedule came out, many wondered if the unit could mesh together in time for opening day, when the Rowdies would face the highest-scoring attack in the Eastern Conference a season ago. New York's lineup Saturday afternoon featured six starters on Major League Soccer contracts, including all of the front five.

Tampa Bay's defense passed that test in superb fashion, limiting the Red Bulls to just two shots on target in the match.