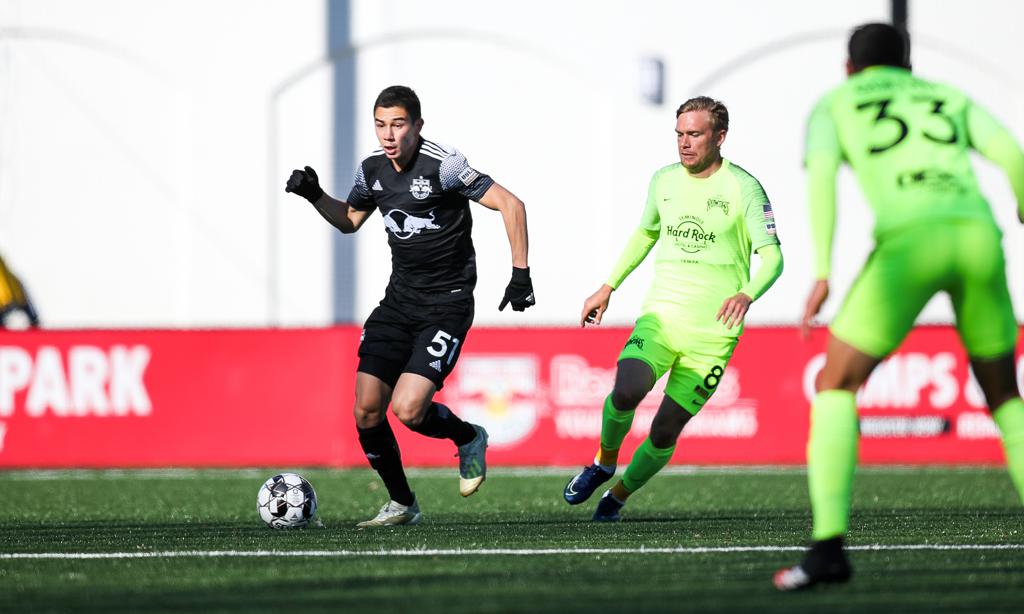 ST. PETERSBURG, Fla. (March 7, 2020) -- In three previous visits to play the New York Red Bulls II, the Tampa Bay Rowdies had lost all three matches by a combined score of 11-2.

The Rowdies broke that voodoo Saturday on opening day of the 2020 USL Championship season, earning a hard-fought 1-0 victory to start their season on the right foot.

Leo Fernandes, who grew up on Long Island and was playing in front of friends and family, scored the only goal of the day in the 57th minute.

"This is a fantastic result to start the season," Rowdies Head Coach and Technical Director Neill Collins said. "Very difficult conditions made it hard to play attractive soccer but the players adapted fantastically well. There were many positives in regards to carrying out our gameplan and of course plenty to improve on this early in the season."

Tampa Bay's starting lineup featured seven players acquired by the club this offseason, but it was two familiar faces that broke the match open after a deadlocked first half.

Fernandes and Zach Steinberger played a one-two combination on the edge of the Red Bulls box before Steinberger advanced to the endline and cut the ball back for Fernandes. The Brazilian curled a shot with the outside of his left foot past Red Bulls goalkeeper Willis Lapsley and into the side netting to put the Rowdies on top just before the hour mark.

A few minutes later, Juan Tejada appeared to double Tampa Bay's advantage, pouncing on a rebound after Fernandes' shot struck the post and scoring, but the offside flag ruled the goal out and the Rowdies lead remained 1-0.

New York had chances to equalize, particularly in the 73rd minute when Sebastian Elney put a header on target from point-blank range only for former Red Bulls goalkeeper Evan Louro, now in net for the Rowdies, to deny him on the goalline.

Tampa Bay's new-look defense, with a new starting goalkeeper and three new centerbacks in front of him, limited the Red Bulls to just two shots on target in the match. Former New York defender Jordan Scarlett also made his Rowdies debut against his previous club.

"I've got to give a special mention to Evan and Jordan for going back to their old cub and playing so well so quickly," Collins said. "That can be tough but they handled it fantastically well today."

Now the Rowdies head to Miami to renew their rivalry with Miami FC, which joined the USL Championship as an expansion side in December, next Friday, March 13. The two teams played together in another league during the 2016 season.

Tampa Bay will then return home to host North Carolina FC in its home opener at Al Lang Stadium on Saturday, March 21 to open a three-game homestand.