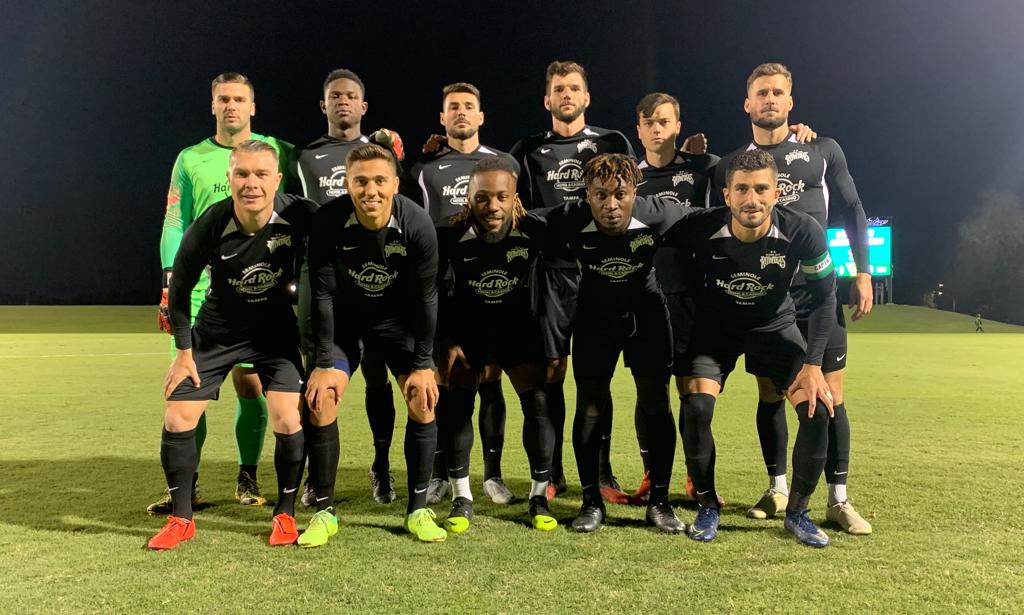 TAMPA, Fla. (February 28, 2020) -- Tampa Bay Rowdies forward Juan Tejada scored in stoppage time to help the 10-man Rowdies to a 1-1 draw in their preseason finale against the University of South Florida Bulls on Friday night.

The Rowdies trailed for most of the game after USF Adrian Billhardt scored in the 25th minute. Tejada scored in the second minute of added time after Lucky Mkosana nodded on a long ball forward from goalkeeper Evan Louro.

Rowdies Head Coach and Technical Director Neill Collins used 19 different players on the night, giving as much of his roster as possible a final workout before the start of the USL Championship regular season next weekend in New Jersey.

"We'll find out next Saturday (how ready we are for the regular season,)' Collins said. "Preseason has been good in many respects, but the tests start now. This is when you start judging the players. There have been many positives, but there's also been some things that haven't gone as we'd like them, just like a real season."

The Rowdies sputtered offensively in the first half and took a bad break in the 66th minute when Forrest Lasso was shown his second yellow card of the second half and sent off. Tampa Bay would play the final 30 minutes down a man.

USF nearly doubled its lead in the 70th minute when Victor Claudel took a shot on target from inside the six-yard out, only for Louro to make a spectacular save with his left hand while falling to his right.

"There's a reason that we've kept this game on the schedule (year after year)," Collins said. "It's a real good test. We've got a great relationship with the coaching staff here. I thought (the Bulls) were excellent tonight. I thought they were the better team. You can see how well coached they are. You can see that they have talented players that will go on to have professional careers."

Despite the man disadvantage, the Rowdies closed the match on the front foot, with Tejada forcing a great save from USF's goalkeeper in the 76th minute.

The match went into stoppage time with the Rowdies still behind, but Tejada's individual effort to tie the match after beating his defender and rounding the goalkeeper to close preseason with a bang.

"That goal is everything we know about Juan," Collins said. "Juan had an excellent season and at the end it tailed off a little bit because he had put his body through so much to get in that position. Now he's back, he's fit and he's ready and he's a huge part of what we're trying to do here. We played with 10 men for the last 30 minutes and the boys found a way to get their equalizer. Was it deserved? Possibly not, but that's a positive from tonight."

Now, the Rowdies turn their sights from the Bulls to the Red Bulls. Tampa Bay opens its 2020 campaign Saturday, March 7 at MSU Soccer Park in Montclair, New Jersey. The Rowdies will then visit Miami FC on March 13 before hosting North Carolina FC in their home opener at Al Lang Stadium on Saturday, March 21.