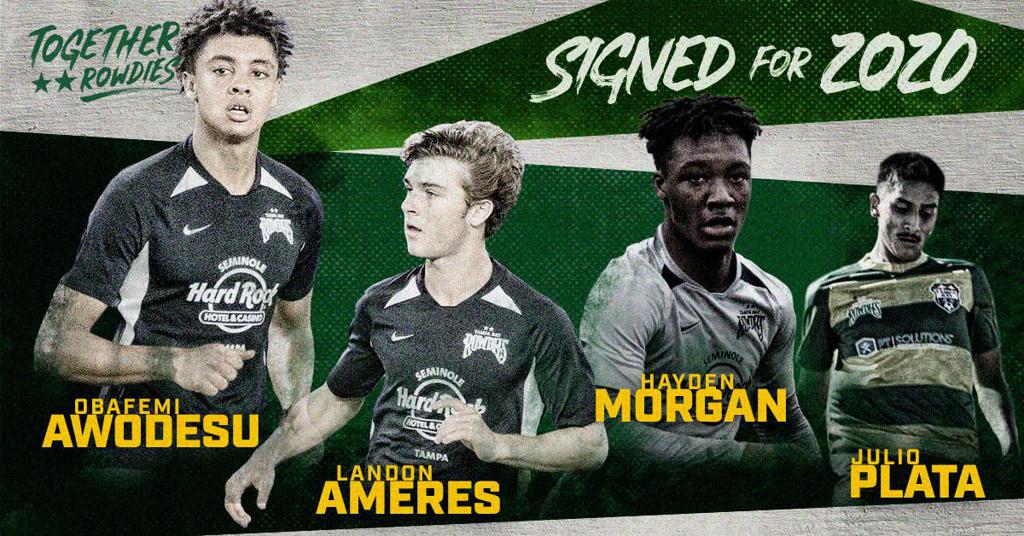 USL Academy contracts allow youth players to train and play within a professional environment while retaining their amateur status with the NCAA. All four players have played with the Rowdies in matches this preseason.

“I’m delighted to put four new players on USL Academy contracts,” Rowdies Head Coach and Technical Director Neill Collins said. “Each of them has their own strengths and it’s important that we show the elite youth players here in Tampa Bay that we’ll provide an opportunity for them. They’ve already shown this preseason their value to our squad and I’m looking forward to working with them to help make them better. It’s going to be a great experience for them and I’d like to give credit to our senior players for looking after them already and helping them settle in.”

Awodesu, born in 2001, is a defender that came up in the Philadelphia Union system before joining the Chargers last year. He has primarily played as the right-sided centerback in matches with the Rowdies first team this month.

Ameres, born in 2002, is a forward that originally joined the Chargers SC in 2015. He spent 2018 in the Atlanta United FC Academy before returning to Tampa Bay and re-joining the Chargers. Ameres has been called up to the United States National Team at both the U15 and U17 levels.

“The Chargers Soccer Club are extremely pleased and excited for Landon Ameres and Femi Awodesu as they agree to the USL Academy Player contract with the Tampa Bay Rowdies,” Chargers Director of Operations Jim DiNobile said. “Landon, Femi and their families have demonstrated the highest standard of qualities to put themselves in this position of opportunity.

We are very confident that with the Rowdies their development will surely continue and demonstrate the high level of young player talent in our Tampa Bay soccer community!”

Morgan, born in 2004, is a central midfielder that currently plays for the TBU Rowdies U17s. He joined TBU in 2016 as a 12-year old. He played for the Chargers in 2018 before returning to TBU.

Plata, born in 2003, is also a central midfielder that plays for the TBU Rowdies U17s.

Both Morgan and Plata helped the Tampa Bay United Rowdies Academy to a perfect three wins in three games earlier this month at the USL Academy Eastern Conference Event.

“As a club, program, and staff, we are truly proud and happy for Hayden, Julio, and their families,” said Anthony Latronica, Tampa Bay United Rowdies Sporting Director Anthony Latronica. “These young men have shown the ability on the field to play with the first team as well as the maturity it takes to step into their environment and be a part of the locker room. This a tremendous opportunity to sign Academy Contracts with the Tampa Bay Rowdies and we are all very thankful.”

Last year, the Rowdies signed Robbie Soronellas, Jack Casey and Dan Wintermeier to USL Academy contracts. Soronellas and Casey appeared for the first team in a 4-1 victory over The Villages SC in the Lamar Hunt U.S. Open Cup. Soronellas was later named to the bench in a league match against the Charleston Battery but did not appear. Soronellas and Wintermeier are both expected to play with the Rowdies U23s this summer.