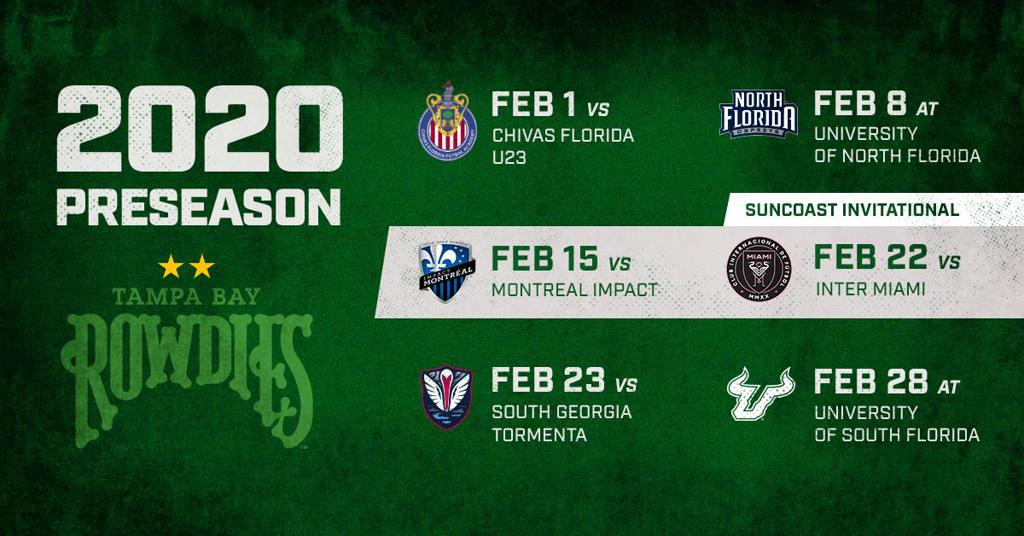 The month of February will see Tampa Bay will take on two Major League Soccer Teams, one USL League One team, two colleges and one amateur academy. The Rowdies will officially open preseason camp Monday morning.

Three matches will be open to the public here in Tampa Bay, with a visit to Jacksonville also planned.

The 2020 Rowdies Suncoast Invitational will take place February 15 and 22. For the first time, admission will be free to the public with no ticket required. On Saturday, February 15, Inter Miami will play the Philadelphia Union at 4 p.m. before the Rowdies play the Montreal Impact at 7 p.m.

The following Saturday, the Rowdies will play Inter Miami at 7 p.m.

The first of Tampa Bay’s two matches against college sides will see the Rowdies head to Jacksonville to take on the University of North Florida Ospreys on February 8. That match will be open to the public and free of charge. The Rowdies will close preseason with their annual visit to Tampa’s Corbett Stadium to play the University of South Florida Bulls on Friday, February 28. Ticket information for that match will be made available in the future.

The Rowdies will play League One’s South Georgia Tormenta for the second-consecutive year on Sunday, February 23 in a closed-door match.

The full preseason schedule is below.

The 2020 Rowdies Suncoast Invitational schedule is below.