Back in 2020: Head Coach Neill Collins 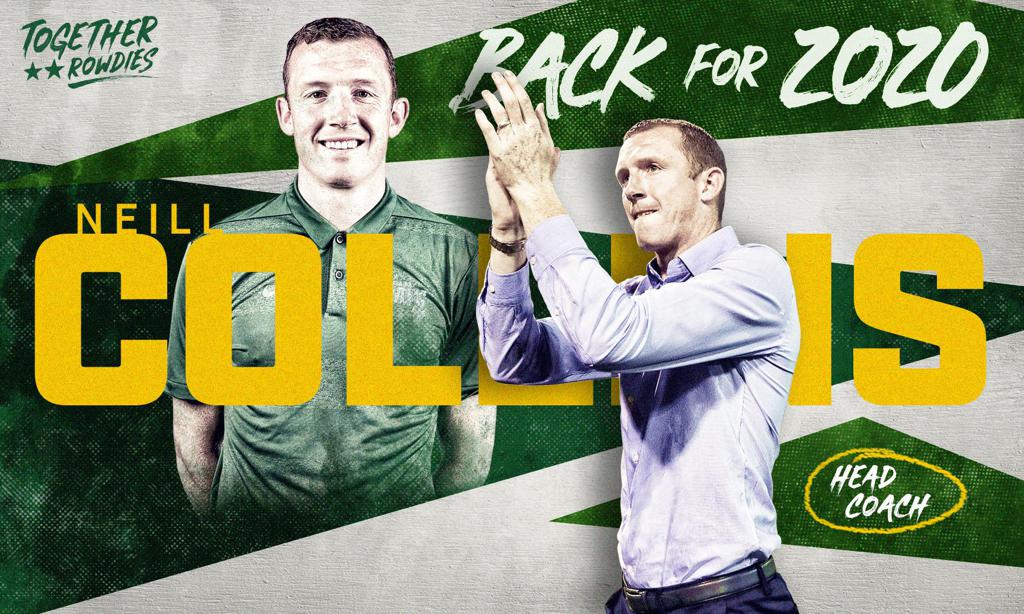 ST. PETERSBURG, Fla. (December 23, 2019) — The Tampa Bay Rowdies are excited to announce that they have extended Neill Collins to a new multiyear contract and have named him Technical Director and Head Coach.

The 2020 USL Championship season will be Collins’ second full season at the helm of the Rowdies. He initially took the job on May 18, 2018 after retiring as a player. The Scottish-born coach brought a fiery passion to the team and the Tampa Bay community being a former Rowdies player himself.

After a lengthy career in the United Kingdom, Collins joined the Rowdies as a player in March of 2016. He quickly established himself as a dominant defender for the Rowdies, making 67 appearances in all competitions. Collins served as team captain in what turned out to be his final match as a player, and he immediately transitioned to a coaching role shortly after.

“Neill was an integral part of our success over the last 18 months and the direction the club is heading” said Lee Cohen, Chief Operating Officer of the Tampa Bay Rowdies. “Neill embodies everything that the Rowdies look for in a coach, he really knew how to connect with the players and staff. He’s very straight forward, and he expects you to put forth 100 percent effort because that’s what he gives to the team.”

This past season, Collins led the charge in reshaping Tampa Bay’s roster to be significantly younger and hungrier. As a result, the Rowdies started the season with a club record 13-game unbeaten streak and won 19 out of their first 20 matches; this proved that they were able to dominate the competition. The 2019 Rowdies set Modern Era club records for points earned (58), wins (16) and goals scored (62) as well as setting the record for the youngest player in Rowdies history to make in appearance in a regular season game at 18 years old; and 17 years old in a US Open Cup game.

“I am absolutely thrilled to extend my stay with the Rowdies and to get the opportunity to continue building on all the groundwork we have work put down over the past 18 months,” Collins said. “I think it was clear to see the improvement in the team last year and the huge strides we made not only on but off the field. I am excited about the possibilities that lie ahead for this club and look forward to the challenge of taking us to the next level.”

“While ultimately it was a disappointing end to the season, I am pleased with the core group of players we have coming back next year, all of whom showed such commitment, energy and enthusiasm when wearing the green and gold,” Collins said. These characteristics are vital to our club, and I believe with the new additions we have announced, we will be even better placed to compete for the championship next year.”

The club’s commitment to Neill allows him to not only continue to build a championship winning team, but also to develop other important aspects of the club. For example, developing the professional pathway for young players in Florida, and recruitment strategies to help bring in high quality level players from around the US and internationally. We have seen the benefit of this over the last 12 months with his connection to growing the youth talent pool in the Tampa Bay region through the different identification camps he has hosted.

Tampa Bay will open preseason camp in mid-January to prepare for the 2020 USL Championship season.