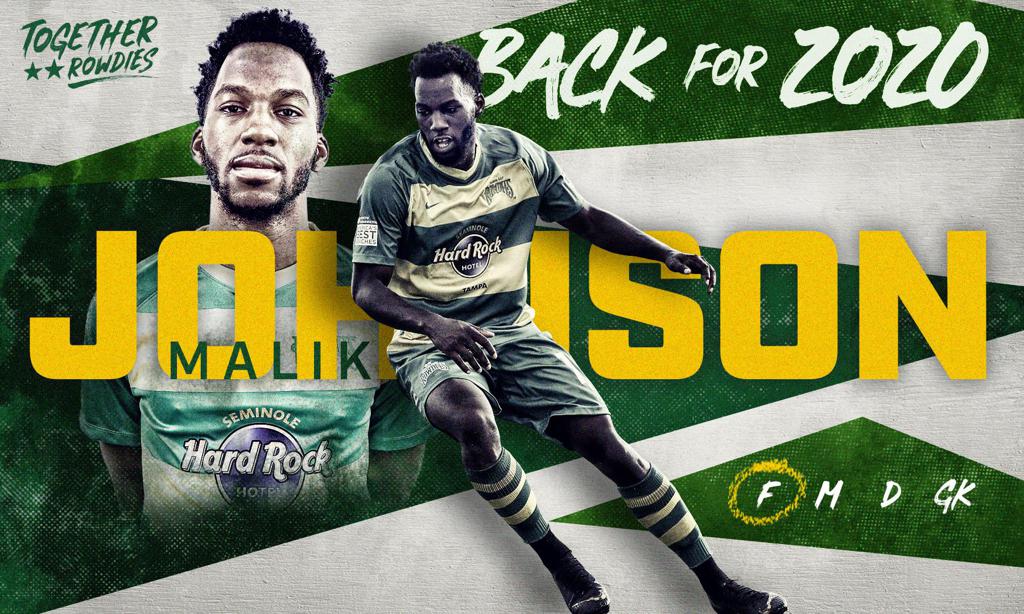 Malik Johnson will be back with the Tampa Bay Rowdies in 2020 after a thrilling debut season in 2019.

Johnson signed with the Rowdies from his hometown club Toronto FC II prior to the start of the 2019 season and suffered a shoulder injury that held him out of action until late May, but once he got on the field, he claimed his spot with stellar play.

"Last year, we wanted to change the face of our organization with young, hungry players," Rowdies Head Coach Malik Johnson said. "Malik fits that mold and had a great season last year. He's someone that I know can reach a higher level but still has a lot to achieve with the Rowdies and we're looking forward to him improving this year."

In 23 starts last season, Johnson tallied three goals and eight assists playing from the right wingback position. He was the player most likely to take on his defenders one-vs-one and beat them. He logged a total of 37 key passes this season, third-best on the team.

His best performances of the year came in late summer, starting with a 5-0 win over Memphis 901 FC on August 24. Johnson assisted on goals that made the score 2-0 and 3-0 and then he himself scored the final goal to end the game with four points. A month later, on September 21, Johnson picked up a hat trick of assists, setting up three different players to score in a 6-1 win over Bethlehem Steel FC.

"After a good run in 2019, I am excited to come back next year to the Tampa Bay Rowdies to play for the best fans in the league," Johnson said.

The Tampa Bay Rowdies have confirmed nine players from the 2019 roster that will return in 2020. The full group is below.