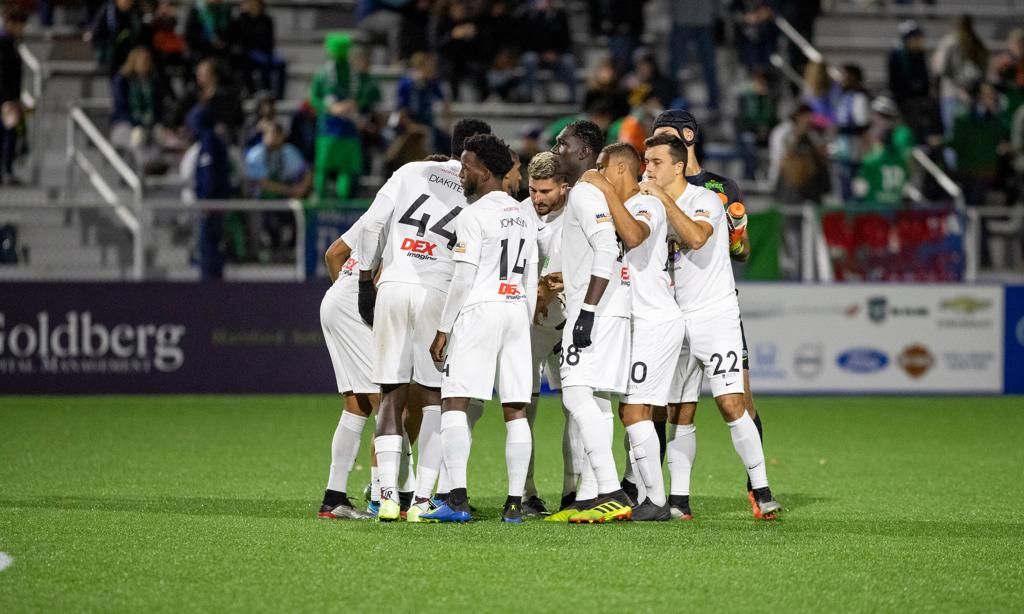 ST. PETERSBURG, Fla. (October 21, 2019) — After 34 matches, the 2019 USL Championship regular season ended with a whimper for the Tampa Bay Rowdies as they fell to a 2-1 defeat to the Hartford Athletic on Saturday night.

That defeat cost the Rowdies a home game in the Eastern Conference Quarterfinals, but the task at hand remains unchanged. The postseason is a new season and Tampa Bay is four wins away from winning hardware.

1. On the road again
The Rowdies knew going into Saturday night’s match against the Hartford Athletic that a win would secure them a home game in the Eastern Conference Quarterfinals next week. If they dropped points, they would need both the New York Red Bulls II and Louisville City FC to similarly drop points at Loudoun United FC and Memphis 901 FC, respectively.

Tampa Bay and Hartford were still tied 0-0 at halftime with it all to play for in the second half. That second period got off to a rough start, with Hartford scoring in the 47th minute to take a 1-0 lead.

While the players on the field likely wouldn’t have had much understanding of the situation in other matches, if any, for fans at home, it was an interesting night of scoreboard watching. Tampa Bay fell behind at 8:10 p.m., but by that time, New York already trailed Loudoun 3-0 on the way to a 7-3 defeat.

Rowdies fans received a morale boost at 8:16 when Memphis took an early 1-0 lead over Louisville. At that point in the night, things were basically as they started. The Rowdies were in line to finish fourth and play at home next weekend despite a loss.

Things continued to get brighter for the Rowdies when Lucky Mkosana pulled Tampa Bay level at 8:36 p.m. in Hartford. Even Louisville’s game-tying goal seven minutes later at 8:43 didn’t do much to dampen hopes. At that point, the Rowdies were set to host Louisville in the quarterfinals next weekend.

After the Rowdies conceded at 8:56 to lose in Hartford, all eyes turned to Memphis. If 901 FC could find a way to win, or hold on for a draw, the Rowdies would be at home next weekend. If Louisville won, the match would flip to Slugger Field.

It was none other than Antoine Hoppenot, who the Rowdies traded to Louisville in June, that sealed Tampa Bay’s fate with a game-winner for Louisville in the 78th minute, ensuring his old club would visit his current club in the opening round Saturday night. The other end of that trade, Lucky Mkosana, had scored for the Rowdies about an hour earlier.

2. Seeing red
The Rowdies ended the match with 10 men after Malik Johnson was shown yellow cards in the 62nd and 68th minutes, earning himself a red card and a dismissal from the match. Tampa Bay fought back to tie the match while playing with 10 men and looked the far better side as it chased a late winner, but ultimately conceded in the final minute of added time.

Johnson is now suspended from next weekend’s visit to Louisville City, creating a sudden lack of depth at the wingback position. Tampa Bay was short one wingback in Hartford as Leo Fernandes missed out due to a hamstring injury, but the Rowdies could now be down two wingbacks for the biggest match of the year.

3. The records fall
While the regular season ended on a downward trend after Tampa Bay’s hot start to the season, all things are still possible in a single-elimination tournament like the USL Championship Playoffs. If the Rowdies can erase from their minds the inconsistent results of the last few months, they can draw confidence from the Modern Era team records they set this regular season.

Whatever happens over the course of the next month, whether the Rowdies are knocked out in the first round or go all the way to win the USL Championship, this has already been one of the best seasons in modern Rowdies history and the foundation is set for even more fun next year.