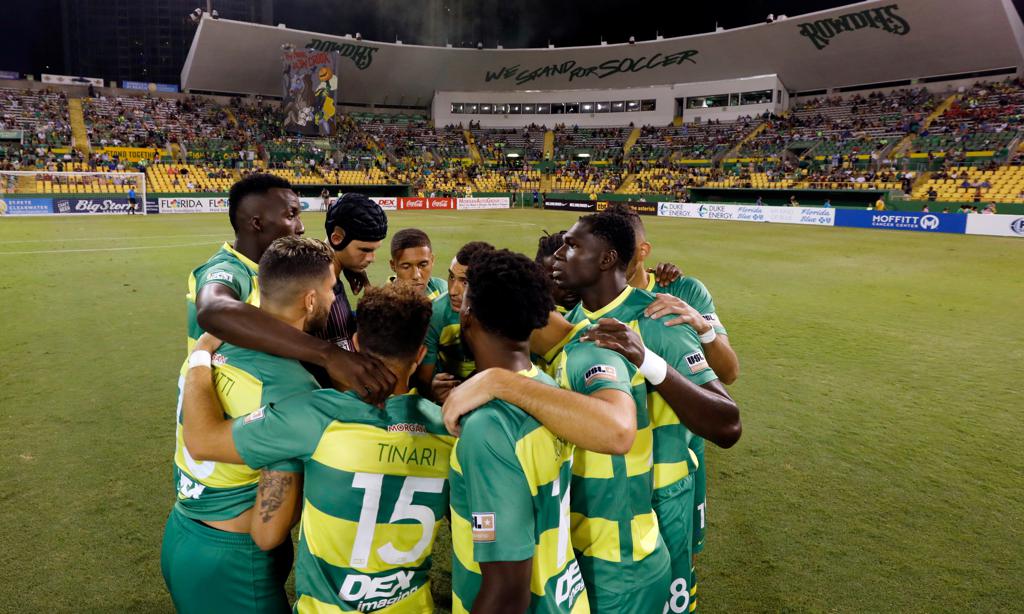 ST. PETERSBURG, Fla. (October 14, 2019) — The Tampa Bay Rowdies hunt for a home quarterfinal will continue to the final weekend of the regular season following a 1-1 draw against the Indy Eleven on Saturday night.

1. Fourth for now
The Rowdies leapfrogged the idle New York Red Bulls II to move into fourth place on Saturday night, but they no longer control their own fate for a potential home quarterfinal.

As a reminder, the top 10 teams in each conference qualify for the USL Championship Playoffs. Tampa Bay clinched its berth in the field on September 18, nearly a month ago. The teams that finish 7-10 will start in the Play-In Round to reduce the field to eight teams in time for the Quarterfinal Round the weekend of October 25-27. The teams that finish 1-4 will host quarterfinals.

Tampa Bay can finish anywhere between third and sixth place. If the Rowdies finish third or fourth, they will host their quarterfinal on Saturday, October 26 at 7:30 p.m. If they finish fifth or sixth, they will travel for their playoff opener.

The Rowdies will be watching the scoreboard Wednesday night as both the Indy Eleven (home vs Swope Park Rangers) and Red Bulls (away against Birmingham Legion FC) will be in action.

Indy leads the Rowdies by two points and holds the advantage in a potential tiebreaker, but if it loses, the Rowdies can surpass the Eleven with a win Saturday night in Hartford. If the Eleven ties or wins, it will finish above the Rowdies.

The Red Bulls trail the Rowdies by one point but have two matches left. If New York wins both of its matches this week (at Birmingham on Wednesday and at Loudoun on Saturday,) it will finish above the Rowdies. If New York drops points, it opens the door for the Rowdies to secure a top four finish with a win in Hartford.

2. Don’t chicken out
If you’re wondering why Sebastian Guenzatti appeared to do a chicken dance after scoring his penalty kick deep in first half stoppage time, here’s the backstory.

After center referee Lorant Varga pointed to the penalty spot following Paddy Barrett’s handball in the box, Indy stepped up the gamesmanship to try and throw Guenzatti off.

First, the Eleven tried to delay the penalty kick as long as possible by protesting the decision. Then, Indy Eleven goalkeeper Jordan Farr held onto the ball until Varga came and took it. Next, once Guenzatti placed it on the penalty spot, Barrett kicked it off the spot and refused to exit the penalty area. Once everything was set, Farr tried to distract Guenzatti by yelling, “You’re a chicken” with some choice expletives mixed in. More than two minutes elapsed between the handball and Guenzatti actually taking the penalty.

Guenzatti held his nerve though, netting the penalty for his 18th goal of the year and retaliated toward Farr with the celebratory chicken dance. As for the gamesmanship, Guenzatti didn’t mind Indy’s attempts to break his rhythm.

“The goalkeeper was holding the ball to waste time and try to get me nervous but that’s part of the game,” Guenzatti said. “There were a few things being said and they tried to get the ball off the spot after I set it. That’s all part of the game and I love it. You just have to stay calm in those moments. I practice for those moments so I was happy when the ball hit the back of the net.”

3. An incredible crowd
If things don’t work out for the Rowdies this week and Saturday night’s match turns out to be the final time the Rowdies took the field at Al Lang Stadium this year, the fans threw a great going-away party for the team.

A season-high crowd of 7,851 fans provided an incredible atmosphere on a fun night in downtown St. Petersburg.

“Tonight the players stepped up to (the size of the crowd) and produced and performed,” Rowdies Head Coach Neill Collins said. “I think anyone that was here tonight should go away having seen a very, very good team performance. We want to play like that to bring people back and have the stands full because I think it helps us. The best players thrive in that atmosphere.”