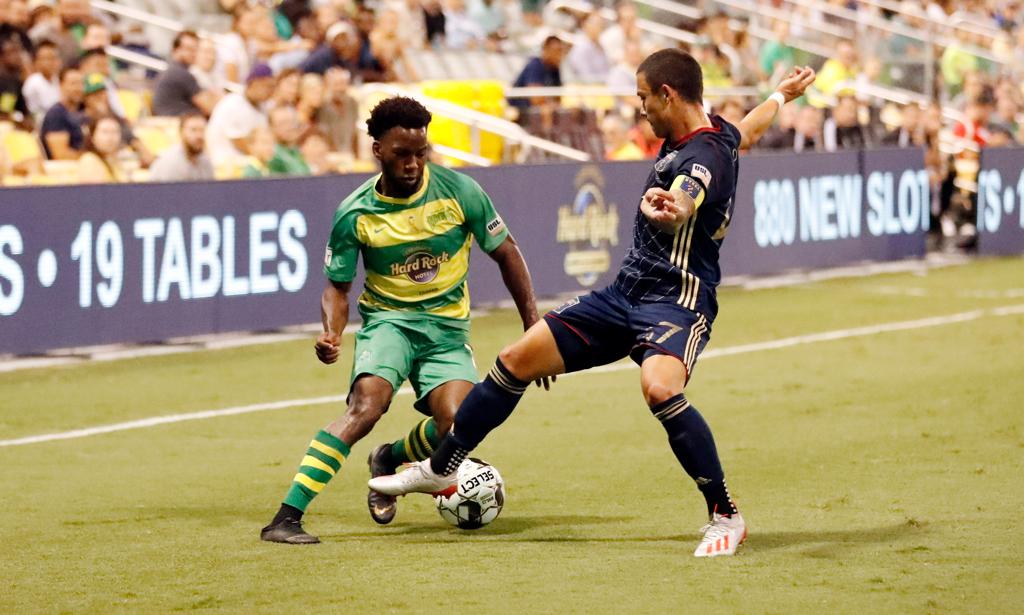 ST. PETERSBURG, Fla. (September 23, 2019) — The Tampa Bay Rowdies won in dominant fashion Saturday night, brushing aside Bethlehem Steel FC in a 6-1 victory to move into a tie on points for first place in the USL Championship’s Eastern Conference with less than a month left in the regular season.

1. An offensive show
Saturday’s six-goal outburst from the Rowdies was rarity. Tampa Bay has become somewhat accustomed to scoring four or more goals recently. Three times already this year the Rowdies have scored exactly four goals in a match. Even five goals is sort of familiar. The Rowdies scored five goals in a match twice in August alone, 5-0 victories over the Charleston Battery and Memphis 901 FC.

But six? Six is rare.

Tampa Bay hadn’t score six goals in a match since August 3, 2013, a 7-4 win over the San Antonio Scorpions. Prior to that, the only other time the Rowdies had scored six was in a 6-3 win over Crystal Palace Baltimore to close the inaugural 2010 season.

The Rowdies have played 297 league matches in nearly 10 seasons on play in the Modern Era. They have only scored six or more goals thrice. What the fans saw Saturday night occurs just 0.01% of the time, historically.

Beyond just scoring six goals, the nature of the goals themselves was spectacular. The opening goal was officially credited as an own goal against Bethlehem’s Ben Ofeimu, but these purposes let’s consider it a Juan Tejada goal because his header was on target. Of the six goals, four came with the first touch and the other two were with the second touch.

2. Wingbacks run rampant
In a team filled with remarkable performances from top to bottom, special consideration must to be given to Tampa Bay’s wingbacks. Right wingback Malik Johnson was unstoppable, tallying three assists in maybe his best performance of the season. Left wingback Leo Fernandes racked up two assists himself and could have had a third had Tejada’s header not been ruled an own goal. Afrim Taku came off the bench to play the right wingback position and scored Tampa Bay’s sixth goal of the night on an assist from, you guessed it, the left wingback.

Johnson and Fernandes combined to create 10 chances for the Rowdies on Saturday night.

3. The ever-tightening top
With another weekend in the books, the situation at the top of the table is only getting tighter and tighter. The top four teams in the Eastern Conference are separated by just one point with a three-way tie on points for first place between the Rowdies, New York Red Bulls II and Indy Eleven.

Indy has two games in hand on the Rowdies, as does Pittsburgh in fifth place, but there are no guaranteed wins at the top of the table. Each of the top four teams have at least one loss in their last three games. Pittsburgh and Louisville are unbeaten in five and eight matches, respectively. The Rowdies will go head-to-head with Louisville this weekend.

The Rowdies couldn't really have asked for a better weekend with a Tampa Bay win, losses by both Indy and New York, plus a draw between Nashville and Pittsburgh that saw both teams drop points.