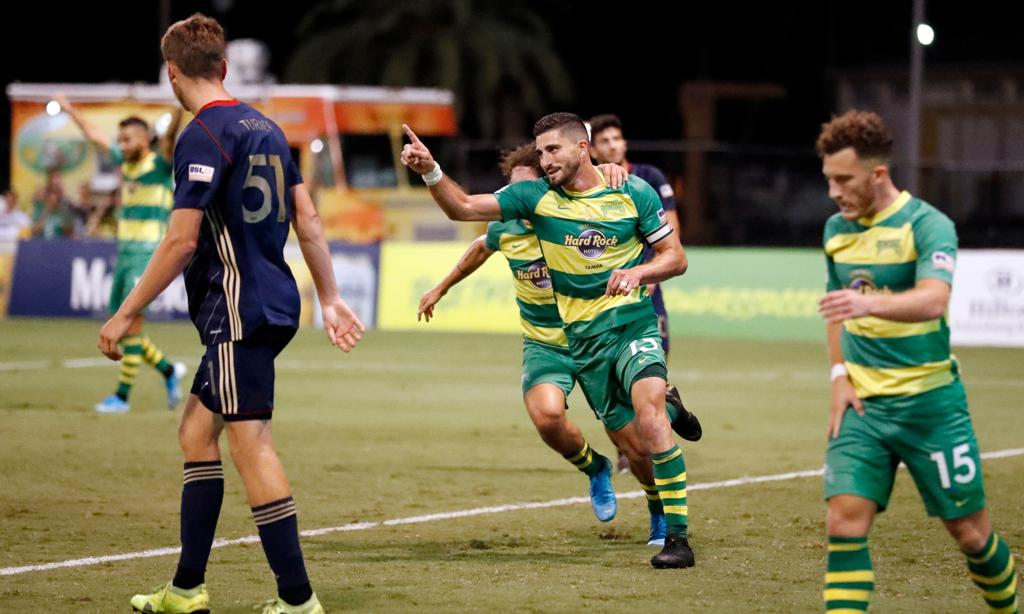 ST. PETERSBURG, Fla. (September 21, 2019) — The Tampa Bay Rowdies steamrolled to a 6-1 victory over Bethlehem Steel FC on Saturday night to move back into third place in the USL Championship’s Eastern Conference with four games left in the regular season.

Five different players scored for the Rowdies (16-6-8, 56 points), plus a Bethlehem own goal, as Tampa Bay bounced back from a midweek defeat in Ottawa.

“It was a joy to watch the first-half performance,” Rowdies Head Coach Neill Collins said. “I think that’s what we promised our fans at the start of the season. We certainly said we’d endeavor to try. We’ve done it in patches, we’ve had some great scorelines here, but I thought tonight in the first half, we were excellent. We were in complete control and it was fantastic football to watch. I was delighted for the team.”

On this night, Bethlehem (8-15-6, 30 points) was overmatched from the opening whistle.

While it took the Rowdies 20 minutes to get on the board, the result was never really in doubt.

Juan Tejada played a major role in the opening goal, putting a header on target that Steel FC defender Ben Ofeimu put into his own net for a 1-0 Rowdies lead in the 20th minute.

In the 25th minute, Sebastian Guenzatti was the recipient of a pass from Malik Johnson to double Tampa Bay’s lead from close range. It was Guenzatti’s team-high 16th goal of the season.

By halftime, the Rowdies would extend the lead to 4-0, with Kwadwo Poku scoring in the 40th minute and Andrew Tinari scoring in stoppage time. The goals were their third and fifth, respectively.

In the first half, Tampa Bay outshot Bethlehem 18-0 with six shots on target and four goals.

Tampa Bay conceded a penalty kick that Bethlehem converted in the 69th minute, but the Rowdies would add another pair of goals by the time the match finished.

Lucky Mkosana netted his fourth goal of the season in the 71st minute and newly-acquired Afrim Taku completed the scoring in stoppage time with his first of the year.

“I think the whole team did well,” Johnson said. “We bounced back from a disappointing loss in Ottawa on a quick turnaround. We got the job done.”

Tampa Bay now sits in third place, tied on points with both the New York Red Bulls II and Indy Eleven at the top of the Eastern Conference. The Rowdies trail both teams on the total wins tiebreaker but have the best goal different in the East at +31. Their 56 points are a new Modern Era club record.

The Rowdies will visit Louisville City FC next weekend and Loudoun United FC before playing their regular season home finale against Indy on Saturday, October 12 at 7:30 p.m. Tickets are available here.