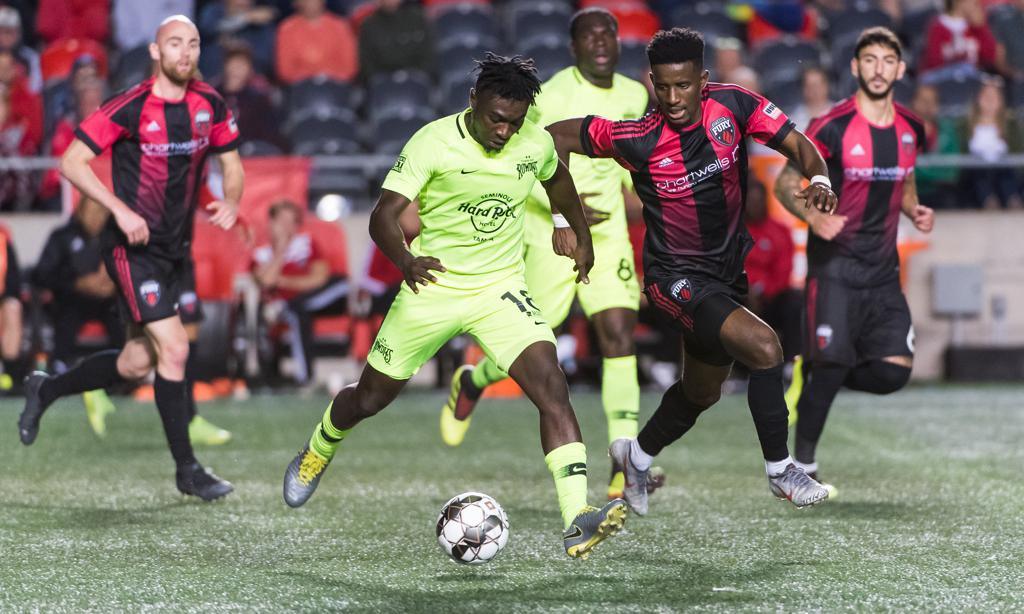 OTTAWA, Ontario, Canada (September 18, 2019) — The Tampa Bay Rowdies fell to a bizarre 1-0 defeat to the Ottawa Fury FC on Wednesday night after a severely delayed call gave the home team a penalty kick in stoppage time.

The decisive moment came in the 90th minute of play when Ottawa’s Chris Mannella went down in the box on a challenge from Leo Fernandes. Neither the center referee nor the assist referee signaled for a foul as the Rowdies broke on a counter attack in the other direction.

Fury FC forward Wal Fall aggressively protested the decision, confronting the referee and stomping on the ground and the referee whistled for a foul when the Rowdies were already nearly to the halfway line.

Fall converted the ensuing penalty before being ejected from the match barely a minute later in a chaotic finish.

The Rowdies (15-6-8, 53 points) never looked likely to win the match on a sloppy night, but will likely feel pretty unlucky how it ended.

Head Coach Neill Collins heavily rotated his side with six changes from Saturday’s draw against Atlanta United 2 as the Rowdies play three matches in eight days. None of the Rowdies top four scorers this season started the match.

Tampa Bay failed to register a shot on target, while Ottawa (11-8-9, 42 points) only managed two beside the penalty kick.

Despite the result, the Rowdies clinched their berth in the USL Championship Playoffs on Wednesday night as the Charleston Battery fell to a 3-1 defeat to Atlanta United 2.

Tampa Bay will now return home to continue the fight for seeding against the Bethlehem Steel FC on Saturday night at Al Lang. Tickets are available here.