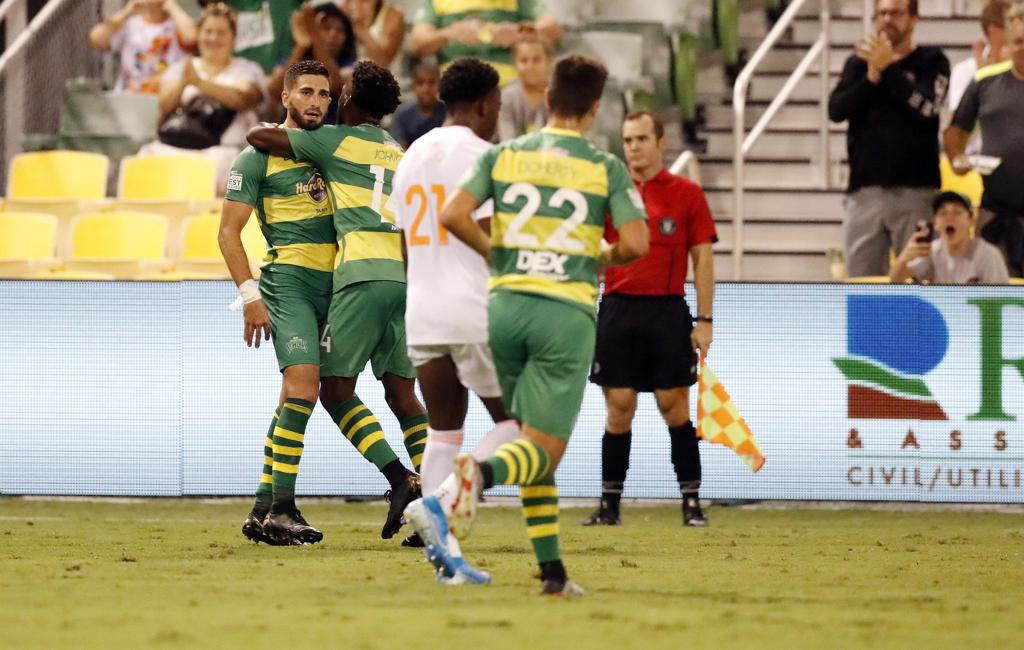 1. Clinch time approaches
The Rowdies went into Saturday night knowing that it was not possible to formally clinch a berth in the USL Championship playoffs no matter the result they earned. However, even after dropping a couple of points, it’s highly likely the Rowdies will clinch a return to the postseason this week.

New York Red Bulls II and the Indy Eleven clinched on Saturday night and now the Rowdies, as well as potentially Nashville SC, are within touching distance. With the Rowdies (at Ottawa), Saint Louis FC (vs New York), Birmingham Legion FC (at Nashville) and Charleston (at Atlanta) all playing midweek matches this week, the permutations are complicated.

The shortest explanation is that if the Rowdies beat Ottawa on Wednesday night at TD Place, they’re in. A win would put Tampa Bay on 56 points with 16 wins. Even if the Charleston Battery win out for the rest of the season, they would finish on 56 points but lose the first tiebreaker with 15 wins. That would make the Battery the eighth team unable to finish above Tampa Bay, officially punching a postseason ticket for the Rowdies.

Winning in Ottawa won’t be easy, but the Rowdies should be motivated by the postseason math. If things don't go well in Ontario, the Rowdies would also clinch with a Battery loss in Atlanta in a match that kicks off 30 minutes later Wednesday night.

2. The possession puzzle
Atlanta came to Al Lang Stadium with a gameplan the Rowdies have become all too familiar with in the last few seasons. We’ve seen examples for the last few seasons that when teams overmatched on paper visit the Rowdies in St. Petersburg, they try to limit the Rowdies attack by holding the ball for as long as possible rather than sitting in deep and defending with everyone behind the ball.

Luckily for Atlanta, the go-to game plan for a match at Al Lang is how they prefer to play regardless of opponent, so the visitors are extremely good at doing what they needed to do to get a result.

The question, though, is do the Rowdies need the ball to play well?

Tampa Bay had just 38.3 percent of possession on Saturday night, a new season-low. Yet the Rowdies still matched Atlanta in shots and goals. Going into Saturday’s match, the Rowdies had averaged 52.9 percent possession.

Here’s a look at how the Rowdies have performed this season, broken down by possession percentage.

The data presents an interesting trend. The Rowdies are unbeaten this season when they have less than 50 percent possession and tend to get worse results the more possession they have.

With that in mind, Tampa Bay shouldn't mind the matches like Saturday night where an opponent comes to Al Lang intent on holding the ball as much as possible. That plays into the Rowdies hand, but Tampa Bay needs to be absolutely clinical in those matches. The Rowdies put just two of their 10 shots on target Saturday night and dropped points as a result.

It shouldn’t be too surprising that Guenzatti’s goal came on an assist from Leo Fernandes, Tampa Bay’s assist leader with eight on the year. This is the third time this season that Fernandes has assisted Guenzatti on a finish.

The two grew up together in the New York City area, frequently facing off against one another at the club level before finally becoming teammates with the New York Cosmos in 2015, as chronicled in this Tampa Bay Times piece from June. They reunited with the Rowdies in 2017 and are now the only two players left on Tampa Bay’s roster from that season.

“Everybody knows me and Leo have been playing together for a while," Guenzatti said Saturday night. "We’ve known each other growing up always playing against each other. It’s easy when you’ve played with somebody for that long, over 15 years. It makes it that much easier. Leo is an amazing player. I don’t have to say it. The assists he gives are unbelievable. The balls he puts into the box are amazing. Today he gave me a great pass, the one that forwards always look for.”

The dynamic duo has combined for 19 goals and 13 assists so far this year, a great return from two of the Rowdies most senior players.